Manfred Goebl, Ph.D., senior European technical development applications analyst at Mundipharma Research GmbH & Co., talks to Tanuja Koppal, Ph.D., contributing editor at Lab Manager Magazine, about the due diligence that needs to be done before putting in place a Laboratory Information Management System (LIMS) that is both user-friendly and effective.

Q: How did your involvement with LIMS begin?

A: I started working on LIMS in 1989. I was in a sales position then and had the opportunity to work on a few different LIMS that were available then. LIMS at that time was all server based, since personal computers were still young. The servers were expensive and memory was very limited, with ~300 MB hard disk drives. After a decade in sales I switched to the other side of the table and joined Mundipharma to help them implement LIMS in their laboratories.

Q: Can you share some of your experiences setting up the LIMS at Mundipharma?

A: When I joined Mundipharma there was no LIMS in use at the company. So the first thing I did when I got here was to get user requirements. First you have to make clear what it is that you need. LIMS is usually not implemented for just one laboratory, but spread within and across different departments. So you have to find out about the workflow within and between departments. This user requirement specification has to be written down in a clear and structured way so that potential vendors can read and understand it. The vendors can then demonstrate how their system best fits your needs. In my sales position we had to make such presentations to prospective customers based on their user requirements and then make modifications to our system to make sure it worked for them.

At Mundipharma we have three sites functioning in three different countries—in Germany, the U.S. and the U.K. In 2000, representatives from all three sites got together to discuss user requirements and to identify issues that were important to them. We needed a system that was clear, convenient and understandable and that had an interface to our chromatography systems, which generated a lot of data. Being a pharmaceutical company, we also had to take into consideration what the regulatory authorities needed for validation and audits. We met with different vendors and finally settled on LabWare.

Q: What is the driving force behind implementing LIMS?

A: The reason for the growth of LIMS is similar to why we are seeing the growth in electronic laboratory notebooks (ELNs) today. There are a lot of people working on different projects and everyone works out of notebooks. Bringing all the data together for generating reports, for instance, becomes very problematic and takes time. LIMS probably first started out in a quality control lab because everything there is fixed, based on product specifications. You know your analytical methods, your instrumentation and your people. LIMS was mainly designed for the analytical labs, not only for generating reports but also for managing the instruments. Its use is still mainly in this area, but with new modules being introduced, it’s expanding into other areas as well.

Q: How do ELNs differ from LIMS?

A: When compared to LIMS, ELNs are not structured. In LIMS you have to define beforehand what is going to happen, but with ELNs you can write things as they happen. It is like a piece of paper where you can add your notes, any chemical structures and reactions, equations, spectra, and anything else that is needed. In early research, for instance, not everything is fixed and things have to stay flexible. Hence, this data fits better into ELNs than into LIMS. However a link is needed between ELNs and LIMS, and being in just one system is easier. Also, with LIMS you can track everything. People often use Microsoft Word or Excel, but you can’t use that for an audit, since you can’t track information back. Our vendor, LabWare, now offers ELNs integrated into LIMS. We haven’t invested in ELNs yet, but we are discussing it.

Q: How easy is it to customize LIMS to suit your needs?

A: I would buy what I need today based on my user requirements and see how flexible the system is for expansion. I did all our customization myself, but others who don’t have the technical expertise should consult with the vendor. LIMS is a system that is never set in concrete. The workflow and user requirements are changing all the time, and hence the system has to change, too. If you can fit the processes into the system as it exists, then it’s cheap, but if you have to make a change, it’s not cheap. Sometimes the vendors make the modifications for an extra fee or you can hire a consultant. There is a user acceptance issue, too. Hence, we built a team to get all the user specifications together. They talked to the people in the labs to see who communicated with whom in what way, to find out what they wanted, and what the LIMS should look like. All this has to be done beforehand, and in my opinion it’s very important.

Q: Can you elaborate on the types of user training needed?

A: We separated our users based on their roles, depending on what they do. We set up different menus for different users. For instance, a user who worked in the lab was trained to enter data or sample information. A lab manager was trained to generate reports or to authorize protocols or samples. Our system administrators received training from the vendor on how to program and use the software, how to generate and integrate reports, how to enter new users, and so on.

Q: How easy is it to switch from one system to another?

A: Transition is never easy. Sometimes you can get old data into the new system and can see it but cannot do anything with it. It’s difficult to fill old data into new database fields with a different structure since databases are all different, depending on the vendor. Sometimes vendors stop manufacturing their systems and discontinue all the technical support. That’s tough. All the data is gone when people can’t switch.

Manfred Goebl is the senior European technical development applications analyst at Mundipharma Research GmbH & Co. Goebl studied chemical engineering and then switched to studying chemistry at the Technical University in Berlin, focusing on physical chemistry. He earned his Ph.D. at the Nuclear Research Center Hahn-Meitner Institut in Berlin in radiation chemistry. He worked for six years at Dionex, starting out as an application chemist and ending up in sales. In 1989 he switched completely to LIMS, starting out with VG Instruments, which was bought by Fisons and later became a part of Thermo Instruments. It still exists under the name Sample Manager. He joined Mundipharma GmbH in Limburg, Germany, in 2000 and was hired to implement a LIMS for the analytical and formulation departments, from scratch. In 2004 the research department of Mundipharma GmbH was split and merged with Napp Pharmaceuticals in Cambridge, UK, and became a new company called Mundipharma Research. The LIMS he had up and running in Limburg in the German language was then switched off, and the company started using a common system running in English from LabWare. Goebl’s job now is to maintain the system and develop new features as required, depending on the workflow. He is still the only one in Limburg responsible for implementing LIMS, but he works closely with his colleagues in the UK. 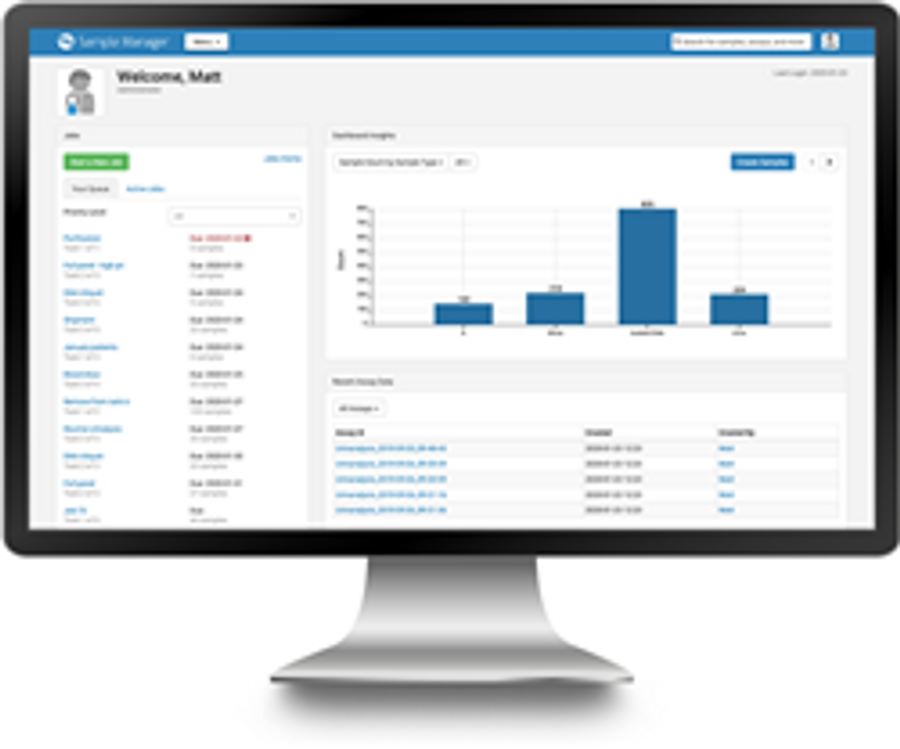