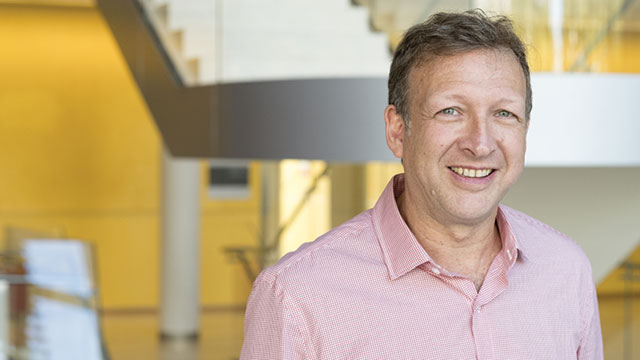 Fraser Glickman, PhD, is a research associate professor and director of the High-Throughput and Spectroscopy Resource Center at Rockefeller University. He is interested in discovering molecules that can be developed into biological tool compounds and medicines, and in the technologies associated with drug discovery. He is working with various researchers to identify and develop novel assays for tool compound discovery and then apply screening strategies to identify compounds that can be used to further our understanding of disease. His High-Throughput and Spectroscopy Resource Center conducts a variety of sophisticated approaches for measuring the interaction of small molecules and antibodies with their molecular targets. The information generated is critical for understanding the underlying mechanisms of disease and for beginning to identify drug-like molecules based on this understanding.

Q: Can you share some details on the work being done at your High-Throughput and Spectroscopy Research Center at Rockefeller University?

A: We are a core facility supported by Rockefeller University and Weill Cornell Medical College, and we in turn support projects from all over, especially the New York metropolitan area. We support our clients in drug discovery, which involves screening large numbers of compounds to find active lead structures. For refining the understanding of how compounds engage their targets, we also support spectroscopic analysis of various molecules, particularly focusing on interactions between ligands and receptors. We are also involved in training our students and users in high-throughput screening (HTS) and spectroscopic analysis and in the practice of drug discovery. Our work involves miniaturization of assays in microtiter plates. The assay formats require various types of instruments that can read anything from fluorescence, luminescence, and oxygen channeling to highthroughput automated microscopy. The automation we have is aimed in three areas: handling the microplates; dispensing liquids, which is essentially automated pipetting; and handling the compound libraries.

Q: Is there a big difference in terms of how automation and robotics are being applied for HTS in academia versus industry?

A: It’s not that much different; it’s just a matter of difference in scale. In industry, the labs are larger, but you will see similar types of instrumentation and processes. If you compare screening in a small biotech company with that of a small academic lab, you will see similar types of equipment. There are large academic screening centers that have instrumentation very similar to pharma companies. The pharma companies have more invested in drug discovery so they tend to be early adopters of technology, but often, academics are the original inventors of the technology and are the first to identify useful tools, which are made publicly available.

Q: As the director, can you share your perspectives on some of the challenges in terms of evaluating and investing in new instrumentation and software?

A: What a good lab manager can do is identify needs that different laboratories or people share, and this involves seeing the common problems that people have and being aware of the various technologies that are available. When we are interested in a new technology, we scan the horizon to see what’s out there. If a technology comes along that can solve these common problems, then we go out to the company and test the instrument with real samples and controls. Or we invite the technology provider to place the instrument in our lab for a period of time for testing, and we take time in thoroughly evaluating a new technology. We tend to be rather conservative in our approach.

Q: What are some of the common needs that you have identified among your users when it comes to automation?

A: We are looking at ways for automating different biophysical assays. There is a lot of effort these days to do in silico drug discovery, which involves entering crystal structures of proteins into a computer program and doing highthroughput docking of compounds. This is done to identify compounds from a large data set that will bind to a certain target. However, to test different hypotheses, we need to perform various biophysical analyses with relatively high speed. So we are looking for technologies that can do such analysis in highthroughput. Examples of such technologies are differential scanning fluorimetry (DSF), surface plasmon resonance (SPR), microscale thermophoresis (MST), and second-harmonic generation (SHG), and they all have potential to test large number of compounds that come out of in silico studies.

Q: Are there any trends in cellbased assays, particularly in terms of automation?

A: The cell-based assays are also interesting to us, and we have a highcontent screening platform. These systems have become very robust and reliable in recent years. The software that controls the system has also become easy to use and it’s become easier to teach people how to use it too. The new developments in cellbased assays involve growing cells in a 3-D matrix rather than a monolayer so that it’s more physiologically relevant to measure cell metabolism and such parameters. There is also interest in growing cells in lower oxygen, which better replicates physiological conditions. In cell-based assays the challenges are more in the techniques for growing and handling the cells, rather than in automation. For example, it is still difficult for us in a small academic setting to screen live cells, which requires automated cell incubators and automated timing of cell-seeding.

Q: What are some of the changes that have taken place in recent years to improve automation and miniaturization?

A: In the past five years there hasn’t been much change in the instrumentation, but the systems are becoming more reliable, whereas in the past they were more prone to breakdown and sometimes you would question whether it was worth automating at all. It’s become much easier to run processes overnight, monitor them using alarms, and correct them remotely. We are not doing this as much in academia because this type of automation can be quite expensive. However, I do believe it will become less and less expensive over time. In academia, instead of having giant automated systems, you will find a lot of smaller, flexible systems that can be changed as the job changes. Our automated systems are modular and mobile because we built them slowly, one piece at a time. In industry, the automation is built around one process. Being in academia, our processes are always changing and we do things on a smaller scale, so it’s easier to do it in a modular fashion. We need to rely more on the laboratory scientists to handle the microplates and program the automation software. Hence, we only automate processes that can be done without the need for specialized software and hardware engineering.

Q: Are there new trends and technologies in automation that you are excited about or you consider to be game changers in the field?

A: There are systems that do automated cell culture, but every time you change the process it becomes a programing hassle, as the systems are quite rigid. Now there are new systems with robotic arms that can mimic the motion of a human arm—and something like that will be a real game changer. Instead of using computer programs and commands, the arm can be trained by physically moving it. For example, the robotic arm, which is articulated like a human arm (called “anthropomorphic”), can be placed in front of the cell culture hood and you can hold it just like a child’s hand and move it in ways you want it to move. The robotic arm then remembers that motion and can do it faster, over and over again, as needed. So you train it by simply showing it what to do. You can then use software to revise and simplify the motion. The vision among automation experts is to use artificial intelligence (AI) to refine the movements, so the robot learns by itself. I think that’s where we are headed, and commercial products are just starting to come out. If the automation includes AI where you can teach the robot in a more human way, then automation becomes much more flexible and can be adapted to different tasks. It’s a human interaction with the robot, almost like dancing with a partner. However, I do understand that a big challenge with AI is in the robots’ ability to see and recognize objects and incorporate this in their learning.