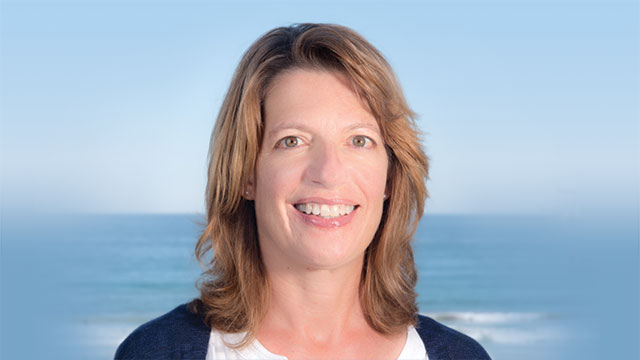 Katherine Barbeau, PhD, is a professor and marine chemist in the geosciences research division of the Scripps Institution of Oceanography at the University of California, San Diego. She received her doctorate in chemical oceanography from the Massachusetts Institute of Technology/Woods Hole Oceanographic Institution joint program and her BS from Long Island University. Her research interests include, among others, the biogeochemical cycling of trace metals in marine systems and the ecological role of micronutrient trace metals.

Q: What does your lab do?

A: I study trace elements in seawater, primarily iron and copper, which are what we call biologically active. They are involved in biological cycles, so they’re elements that are either biologically necessary—in the case of iron, it can be limiting to the microbial community—or elements like copper, [which] can be toxic when they’re present at elevated concentrations but can also be necessary micronutrients in open-ocean regions where they’re present in very low concentrations. So, I do both chemistry and biology—looking at the chemistry of these elements in seawater but also how they interact with microbes in seawater.

Q: What are the key projects you’re working on currently?

A: I tend to do a lot of interdisciplinary work. One of my main projects right now involves working with the California Current Ecosystem Long Term Ecological Research (CCE LTER) site, a region off the California coast where we’ve established a longterm time series research program. We go out periodically and do what we call process cruises on large oceanographic research vessels for about a month. The CCE LTER program studies processes in situ, with my group usually focusing on iron as a potentially limiting micronutrient in the California current ecosystem. We’re working on a variety of components of the ecosystem together with a larger interdisciplinary group, and my team is just one small part of that. In another project, myself and a coprincipal investigator are trying to correlate iron-binding ligand chemistry with metagenomic and metatranscriptomic data to try and identify what marine microbes are responsible for the production of iron-binding ligands. I also do work in other field environments besides the California current. We recently completed several cruises in an Antarctic fjord system, where we were part of another interdisciplinary group studying this ecosystem. We were characterizing the role of iron in that system, where it can also be a limiting micronutrient for algal productivity. We also look at copper chemistry, including copper concentration and associations with organic matter, in San Diego Bay, where copper is a constituent of bottom paint on a lot of recreational boats as an antifouling agent.

Q: What are the main portable analytical instruments you use for field research?

A: One of them is a portable handheld YSI probe that we use in some of our San Diego Bay work, which is conducted off a small boat, so we don’t have a laboratory available to us. We go down, take samples in the bay, and then come back and do the analysis in the shore lab. [The YSI probe] helps us to measure temperature, salinity, pH, and dissolved oxygen on the fly while we’re collecting our samples. When I go to sea on the larger oceanographic research vessels, to measure total dissolved iron I use a flow injection analysis instrument, the FeLume, made by Waterville Analytical. To look at iron and copper speciation—iron and copper associations with organic matter—we use a Bioanalytical Systems controlled growth mercury electrode. That’s an instrument that is not normally designed to be used as a portable laboratory instrument, but we make certain adaptations so we can take it to sea. Because I do interdisciplinary work and look at the impacts of trace elements on biological communities, I also use instruments that are geared toward biological analysis like measuring chlorophyll fluorescence. We are often using a fluorometer to measure chlorophyll fluorescence in natural samples for incubation experiments conducted at sea—usually a Turner Designs fluorometer. We have also used different UV-Vis spectrophotometers in labs at sea; currently we use an Agilent Cary 300 UV-Vis system.

Q: What are some of the trends you’ve noticed in those instruments over the years?

A: Things like the YSI probe are a big improvement. When we started, that type of instrumentation probably wasn’t even available. So our capabilities [with] those handheld-type instruments are certainly improving.

Q: What are some of the challenges you face when using portable instruments?

A: When looking at concentrations of trace elements in seawater, the concentrations are very low, so contamination is cause for concern. In terms of the instruments themselves, obviously there are variations from ship to ship in lab capabilities, but motion is a constant concern that you wouldn’t normally have to deal with on land. For some instruments, that’s not a big deal; you just tie down your instruments and you’re good. But other instruments, such as the mercury electrode, because it’s a dropping mercury electrode, it’s very sensitive to motion and vibration, so we have to hang it from the ceiling so that it moves more smoothly with the ship.

Q: Any other general challenges?

A: Unreliable power can be an issue just because you’re on a ship and power can be interrupted, so we usually carry UPSs for our sensitive instrumentation. Availability of clean water can be another issue. Most ships do have Milli-Q- and Barnstead-type systems nowadays, but we usually try to bring our own clean water. Exposure to salt air can cause corrosion on instruments. In general, at sea, you may need to worry more about climate control in your laboratory environment than you normally would when you’re on land. Because we do trace analysis, we’re often building our own clean laboratory facilities at sea, so we bring portable laminar flow hoods, a lot of plastic sheeting, and PVC pipes so we can set up a positive-pressure clean space. You have to be flexible because you don’t know what the ship’s lab might look like or how much space you’re going to get. Handling waste streams and supplies can be quite an issue at sea as well. There are strict regulations with disposal and what you can and can’t pour overboard, so you have to be prepared to sequester your waste for the time period you’re working for. If you’re working in a remote port location, you can have issues with your analytical supplies and how you handle your waste. Packing up your whole lab and taking it to sea and conducting analyses are significant challenges, even if you’re in a large oceanographic research vessel.

Q: What advice do you have for others who are just getting started in similar work?

A: Look for instruments that are manufactured from the viewpoint of being able to take them to sea. In trace-metal analysis, flow injection analysis has opened up a lot of avenues for people to do these measurements at sea, so I recommend that researchers look into flow injection analysis-type instrumentation. Some trace-metal analysts prefer to do all their measurements on ICP-MS. Those instruments are great, and they’re very multielement capable, but they are definitely not portable. I think the analytical precision of flow injection instruments has improved, and I would recommend for those interested in trace-metal analysis to not overlook the utility of portable trace-metal analytical instrumentation. Also, be prepared to fabricate your own laboratory space when you go to sea, because the conditions may not be optimal for you. It’s good to have materials and a basic plan for setting up your own laboratory space at sea to support either your analytical instrumentation or whatever needs you have in regard to the cleanliness of your sampling.

Q: Did you have anything more to add?

A: There are a lot of nontrivial things about working in a lab at sea that people might not necessarily think about. Your at-sea lab is by no means the same as your shore-based lab. When I think of portable analytical instruments, I think of somebody marching out into a salt marsh and sticking a handheld probe in the water. But that is just one end of the “portability spectrum.” Portable can also mean using instruments in a lab that’s not necessarily permanent. When you’re on a research vessel, the laboratory space is permanent, but you have different groups going through constantly. One group might be using that ship in July, but then in August, there’s another group coming aboard, and they’re going somewhere else and doing something totally different. Part of the challenge is that you have to be able to go into this generic space and quickly set your equipment up and get it working and keep it working. As you go out, you may encounter a variety [of conditions]—sometimes the weather can be quite unpleasant. It’s a particular type of portability challenge for the seagoing analytical chemist.