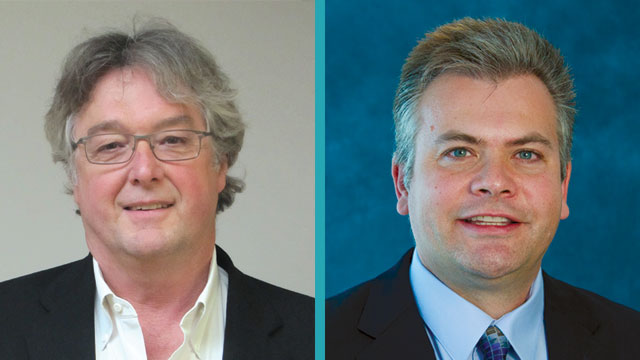 Greg Gocal, PhD (right),  is the senior vice president of Research and Development at Cibus. With an extensive background in molecular biology, he has been central in developing the RTDS™ technology in plant and microbial systems. Currently he leads the technology group and is part of the senior executive team tasked with exploring the many commercial opportunities to deliver on RTDS’ potential applications. Prior to joining Cibus, Dr. Gocal led the molecular biology group of the Plant and Industrial Products Division at ValiGen. He earned a BSc in biochemistry/botany and an MSc in plant physiology from the University of Calgary. He received his PhD in plant molecular biology from the Australian National University and worked at CSIRO Plant Industry in Canberra, Australia. He continued to study the molecular biology of floral initiation/ development as a postdoctoral scientist at the Salk Institute for Biological Studies in La Jolla, California.

Q: Can you offer some historical perspective on gene editing?

A: We started work in gene editing in the early 1990s, and presented some of that work at the Cold Spring Harbor Gene Therapy meeting in 1992. We developed a small fragment [of DNA] homologous replacement (SFHR) strategy to target the cystic fibrosis (CF) gene in airway epithelial cells and demonstrated that those cells underwent genetic correction.

Q: Why didn’t the field take off at that time like it has today?

A: One of the main reasons is that there was a lot of emphasis on cDNA-based therapies at that time. Our contention was that if you were going to have cell-independent expression of the transgene (correcting) gene, then it’s not going to be under the regulation of a specific cell that expresses the gene. Hence, we decided to take a different path and go within the cell to try a “genetic surgery” type of approach. In our work, which was finally published in 1996, we had enhanced the efficiency of gene targeting. However, funding for this type of work was not as exuberant as it was for viral cDNA-based therapies, so it was difficult to make significant progress on this technology. Gene therapy, in general, had another big setback in 1999 with the death of its first patient, Jesse Gelsinger. It wasn’t until the early 2000s, with the papers on the use of zinc finger nucleases (ZFNs), followed by the studies on transcription activator-like effector nucleases (TALENs), and the more recent clustered regularly interspaced short palindromic repeats (CRISPRs), that things moved forward.

Q: What tools did you use for gene editing, and can you highlight some of their differences and similarities?

A: The concept of using endonucleases to introduce double-strand breaks had been around for quite some time, but no one had done it with any specificity, except for the work with homing endonucleases (championed by Cellectis in France), and then with greater specificity in the studies with ZFNs. When Sangamo Biosciences took over the licensing for ZFNs, it became prohibitively expensive for most research labs to have ready access to this technology. Since ZFNs weren’t really user-friendly in terms of their construction and screening, we held off on the application of this potential for enhancing gene editing with double-strand DNA breaks (DSBs) until the TALENs became available. TALENs were made publicly available and were much more user-friendly to generate. We still use TALENs because we feel that they have more flexibility and specificity than the CRISPRs. While CRISPRs are easy to generate, they have limitations. As is the case with all targeting endonucleases, a main concern is off-target effects, and we really don’t know at what level that’s going to be a problem. Another limitation is the potential for an immune response to the nuclease that is generated. Introduction of the ZFNs, TALENs, or CRISPR/Cas9 systems all involve the delivery of a plasmid that encodes for a foreign protein that is potentially immunogenic. The other component of the gene targeting system is the donor DNA. We prefer not to use plasmids for our donor DNA and use fragments of DNA, either single or double strands, that are essentially homologous to the target sequence we wish to modify (except for the base changes we wish to introduce, e.g., to correct a mutant sequence) and hence, have a seamless modification. This way, we don’t leave a footprint in the genomic DNA.

Q: What advice do you have for lab managers looking to evaluate and use gene editing tools?

A: Know what it is that you are working with and how it applies to your system. Make sure that whatever tool/platform you choose, it is not going to disrupt the pathways you are looking to evaluate. Design your experiments so that you look at things comprehensively, keeping in mind the “big picture.” Do a comparison of all the tools that are available. If you don’t care about off-target events, then CRISPR/ Cas9 is likely fine, but if you do care about off-target effects, then go with CRISPR/ Cas9 nickase or the TALENs, keeping in mind that it is easier to develop allele-specific TALENs than CRISPRs. ZFNs are always an option, but they are a little more cumbersome in terms of the processing and lead time when compared to the other targeting endonuclease platforms. Most labs with competent people can readily utilize the TALEN or CRISPR/Cas9 technologies. In addition, core facilities in most universities can produce them for you at a reasonable cost. Make yourself familiar with the literature, and be careful of the hype, whether it comes from the vendor companies or other scientists. The papers will tell you if the lab made its own reagents or bought them from a company, and you can then evaluate the data and see if it’s real or if there are some problems.

Q: Can you offer some historical perspective on gene editing?

A: I first came across gene editing as a graduate student, when I saw a paper in Science in 1996, where the mutation resulting in sickle cell anemia was corrected using a chemically synthesized oligonucleotide. I wondered how this could be applied in plants, and saw the huge potential to develop new traits or understand how genes work by changing the spelling of genes. This field has been the Holy Grail in everything from microbial research and agriculture to human therapeutics, with an aim to precisely change the spelling of genes.

Q: What were some of the early challenges faced, and have they been overcome?

A: Some of the biggest challenges lie in bringing together the technologies necessary for gene editing. From a cell culture standpoint, being able to make a spelling change in a single cell and then being able to get that into a whole organism is a challenge. Another challenge lies in the efficiency of the technology, which is getting a certain percentage of cells to incorporate the change that you are trying to effect. If you are not using selection, how you then find those changes and have the whole organism get the change that is intended, is a third challenge. These are three areas that have to come together, and with recent improvements in cell culture, gene editing, and next-generation sequencing, we can see the progress being made to detect such genetic changes.

A: We have a huge number of applications for gene editing, and from the beginning it’s been like being a kid in a candy store! At Cibus, our focus has been on developing new traits in crop plants. We are working on herbicide tolerance and weed control that are required traits for farmers, and at the same time building on that for obtaining modified oils and starch, better drought tolerance, and better use of fertilizers that get applied to plants. We have developed traits in herbicide tolerance in a non-transgenic way in canola, flax, and rice. Beyond that, we are working in building disease tolerance in crop plants, and with precision gene editing, we will be able to address some of those issues in crop plants like potato. We are also working with a variety of oils for nutraceuticals and industrial use. At the core of our technology is what we call the gene repair oligonucleotide, which is a chemically synthesized piece of DNA that is protected in a variety of ways with a spelling change or a small number of changes buried toward the center of that molecule. This chemically synthesized oligonucleotide enables precision gene editing and repair, by finding its target in the genome and affecting the change. We are continuously improving this technology that we have now used for more than a decade.

Q: For what applications do you see gene editing succeeding?

A: We are completely focused on plant systems and making targeted spelling changes for various applications. However, the lowest hanging fruit at this time with gene editing is to generate loss-of-function mutations in a variety of target genes. Our sister company Nucelis is focused on using gene editing on fermentation products from yeast for applications in cosmetics. There are of course many more applications for gene editing in the human therapy area as well.

Q: What advice would you give to lab managers and people using gene editing?

A: In terms of successfully applying gene editing, you have to look at what you want the outcome to be. Is it a single cell or a whole organism? Is it a specific spelling change or loss of function in the gene you are interested in? Then you need to look at tools that are available to effect those changes, either alone or in combination. You need the correct skills in place for cell culture, screening, genomics, or sequencing and must have the right collaborations in place. As with any other technology, people can use gene editing for positive or negative outcomes. I believe gene editing can have tremendous positive outcomes in agriculture and human therapeutics, and we just need to make good ethical choices.