6-part series
Bioprocessing: Where It Is and Where It's Going
May 28, 2021Olivia Hughes

In biopharmaceutical production, time to clinic is critical, and there is a growing need to optimize the development of new cell lines for production. Cell line development (CLD) is a crucial step in upstream processes for advancing a novel therapeutic to clinical trial. But the current classical approach for the generation of cell lines is complex, multi-stage, and time consuming. This process inefficiency is due to several factors.

Trying to find a high-quality cell line is akin to looking for the proverbial "needle in a haystack," which involves screening many thousands of different cell lines. Additionally, to reduce the need for further process development, cell line screening must be predictive of performance in a bioreactor. Another critical consideration is regulatory compliance, as regulatory bodies—such as the European Medicines Agency (EMA) and the US Food and Drug Administration (FDA)—require proof that the manufacturing cell lines are derived from a single cell. Classical CLD workflows often contain two rounds of single-cell cloning, resulting in a lengthy process exceeding six months.

Researchers must balance process optimization with high-quality requirements and regulatory compliance to achieve fast and efficient Investigational New Drug approval. This can be difficult, especially because the technique used for single-cell processing and dispensing can impact single-cell viability. These various techniques are discussed further below.

Limiting dilution is a conventional well-established single-cell cloning technique. This method entails diluting cells to a low concentration, often as little as a “theoretical quarter” of a cell per well, then plating the cells and waiting for them to proliferate. While limiting dilution provides a gentle and straightforward method that results in high-producing clones, it is low throughput, prone to contamination, and expensive. As limiting dilution is based on statistical distribution, this iterative clone screening technique necessitates at least two rounds to improve monoclonality, which contributes to lengthy timelines.

Fluorescence-activated cell sorting (FACS) flow cytometry is another popular method for single-cell cloning. FACS provides high-throughput screening and sorting capabilities for isolating cells based on high cell surface protein expression levels. However, it is complicated to use and can be harmful to cells due to its high shear stress. Consequently, during the cell isolation process, cell viability and integrity are inevitably compromised.

Several attempts at automation have been made in this field to address the need for increased throughput, sensitivity, and efficiency. One is automated colony picking and imaging instrumentation, which involves culturing cells in semi-solid media. The best candidates for expansion are then identified using fluorescent imaging. However, cell isolation in semi-solid media may inhibit cell growth. As Chinese hamster ovary cells are thought to secrete autologous growth factors, which can stimulate cell growth in single cells, using automated colony picking to isolate single cells, the semi-solid media may prevent growth factors from diffusing into the surrounding culture media. To address this, some companies supplement cell growth with specially optimized cloning media or cell-conditioned medium.

Automated microfluidic systems are of current, major interest and provide a new and innovative perspective for improving traditional methods for isolating single cells.

Using picodroplet-based microfluidic technology, researchers can rapidly isolate hundreds of thousands of single cells into individual picoliter volume droplets (picodroplets). Picodroplets create small microenvironments in which cell production can be reliably and quantitatively detected using assays based on the Förster resonance energy transfer theory. The cells can then be selectively screened and selected based on which single cells have the highest specific productivity. Simultaneously, the picodroplet protects the cells from shear stress, allowing many valuable, viable clones to be produced. Furthermore, the system's high-speed imaging provides visual evidence of monoclonality, ensuring high probability and assurance of being derived from a single progenitor. This process is completed in less than a day and requires only one automated instrument, resulting in significant time and cost savings (Figure 1). 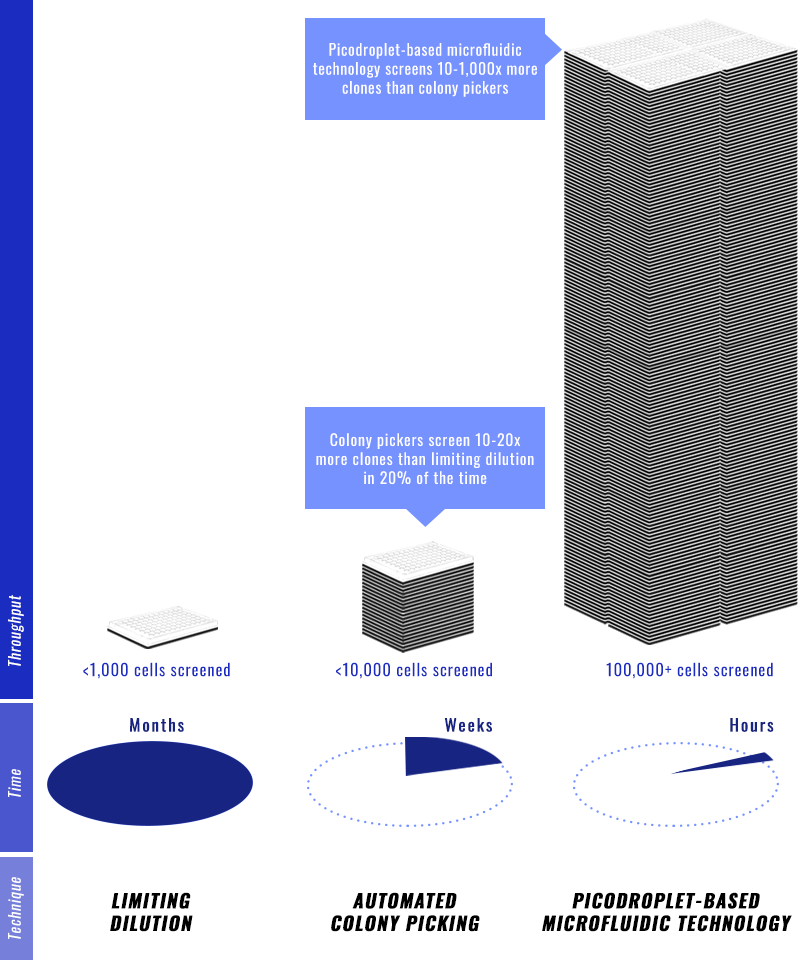 Following single-cell cloning, the most productive clones are further characterized to ensure they can be scaled for production. Traditionally, shake flasks were used for clone expansion and productivity screening. This method, however, does not allow researchers to monitor or control environmental parameters like pH, oxygen, and temperature. As a result, it may not represent the manufacturing process, which applies bioreactors with tightly controlled conditions in a well-defined system.

Another significant development in the last five years has been the production of miniaturized, automated bioreactors, which has improved clone productivity screening. Automated bioreactors provide more sophisticated control of culture conditions in miniature systems that can screen 48 or 96 clones at a time and have been revolutionary. The use of automated bioreactor systems also allows clone screening in multiple “platform” production processes. Many medium, feed, and process combinations can be tested to find the most process-ready clone and help with clone selection.

In summary, advances in the field are allowing CLD processes to become more optimized. Rather than simply automating the classical CLD workflow, which has remained unchanged for many years, it is time to rethink and overhaul manual, labor-intensive steps with fully integrated instrumentation. Using integrated picodroplet-based microfluidic technology, researchers can combine cell isolation, titer determination, and clonality assurance into a reliable, one-step cloning strategy. These systems also significantly curtail the time and resources required to demonstrate monoclonality. Overall, this presents researchers with a low-risk, low-effort option to achieve streamlined optimization with the return of accelerated CLD and a reduction in labor-intensive processes.

Automation Will Dominate Single-Use Bioprocessing within the Next Five Years