The U.S. National Academies of Sciences, Engineering, and Medicine and the U.S. Office of Research Integrity have taken a special interest in recent years to examine potential training gaps among researchers and lab managers, and how mounting pressure to secure grants, publish papers, and earn promotions takes a toll on their outlook of the workplace.

In 2017, the journal Nature convened 16 meetings and workshops in universities across the U.S. and Europe to analyze the state of lab health, workplace pressures, and how best to handle them. Through these meetings, scientists shared both the positive and negative aspects of their workplaces, and as a result, Nature released a survey to see whether the observations made during the meetings were truly representative of laboratory staff as a whole. According to the journal, it is the largest publicly reported analysis of its kind and encompasses responses from 3,200 scientists.

The Nature survey showed some similarities to responses from Lab Manager’s annual Salary and Employee Satisfaction Survey, published in the September issue. Both surveys noted that, overall, laboratory employees’ morale is positive and loyalty to employers is high. However, responses also hinted at areas of improvement.

The Nature survey found a disconnect between those in more junior positions and those in leadership roles. Specifically, one in five respondents in a junior role (which could include graduate students, postdoctoral fellows, or non-principal investigators) reported negative feedback about their labs, describing them as “stressful,” “tense,” and “toxic.” In addition, survey respondents commonly said they wanted more principal investigators (PIs) to take training courses and suggested that PIs ask for feedback from their groups more often. On the flip side, out of the 655 lab heads who responded to the survey, 90 percent said they were in tune with their research groups’ experiments and consistently reviewed their work. They were equally confident that they made themselves available to discuss their groups’ experiments or career development, and they gave their staff the freedom to explore interesting findings that were not necessarily core to the labs’ activities.

Charles Leiserson, professor of computer science and engineering at MIT and co-lead instructor of the Leadership Skills for Engineering and Science Faculty workshop at the university, noted that the disconnect among leaders and junior staff is a common occurrence in most workplaces, regardless of the industry. Those who enter a managerial position enter a “bubble” of sorts, and often employees relate differently to their managers. Employees may be reluctant to come forward with a complaint or issue, which can cause a manager to believe that day-to-day operations and morale are better than they actually are. “People in leadership have blind spots, especially if you have higher goals that you’re pursuing,” says Leiserson. To overcome those blind spots, he suggests establishing expectations with junior staff early and making sure that transparency and an “open door policy” are priorities.

Leiserson co-authored a comment, published in Nature, with colleague Chuck McVinney, principal of McVinney & Company, an organizational development and executive consulting company, which discussed the importance of lifelong learning among science professors and lab managers to help drive innovation and effective collaboration. The two experts drew upon personal experiences within both industry and academia, and outlined some of the key ways to ensure effective leadership. However, according to them, many people in a senior role learn the basics of leadership through a trialand- error process instead of receiving formal training.

Little to no management training

According to the Nature survey results, two-thirds of researchers who head laboratories said they had no training in managing people or running a lab within the past year— although the majority of those respondents were open to training. More than 40 percent of non-PIs also said their labs could do better science if PIs received more training in mentoring and management. Among the least happy, more than 70 percent indicated that this was their main desire. To help overcome this common issue, Leiserson and McVinney together host leadership training workshops for individuals new to management roles, as well as for those with years of experience. In addition to the roles already mentioned, Leiserson is the associate director and chief operating officer of the Computer Science and Artificial Intelligence Lab at MIT, the largest laboratory on the campus. His diverse set of skills and experience provide him with a seasoned perspective on how to run research teams and other groups efficiently. Leiserson and McVinney have been hosting their two-day workshop since 2002. It is offered at MIT as part of the short program in the summer or can be made into a custom forum for outside groups. The duo has hosted this workshop for hundreds of professors in Singapore, India, and other international locations, as well as at Purdue University, Berkeley, and Harvard. The workshop serves as a place to learn about everything, from emotions, viewpoints, values, sources of conflict, and motivators to diversity in the workplace. “We believe in values-based leadership. It’s a very good way of inspiring people to get things done as opposed to inward focus methods,” says Leiserson.

Self-awareness and a deep appreciation of values in the workplace are two of the most important aspects of good leadership, according to Leiserson. “If you figure out what is important to you and what matters to you, and can use that to lead, that can be incredibly powerful in terms of how you pick a path for your team that has everyone on board and minimizes unproductive conflict or lack of motivation.” He and McVinney define leadership as “the skill of inspiring others to achieve shared goals.” To do this successfully, a leader must be in tune with their own strengths and weaknesses, as well as those of their team. Therefore, Leiserson and McVinney utilize the Herrmann Brain Dominance Instrument—a tool to help measure and describe the thinking preferences of individuals. According to Leiserson, the tool acts as a mirror, allowing individuals to reflect on the way they perceive situations and prefer to think.

“Once you get insight into yourself, now you’re in a position to understand that there may be other people who think differently than you, and the reason you disagree or have conflict has nothing to do with what you think is the substance of the matter. Rather, it’s because they see things in a different way,” said Leiserson

A primary talking point within the workshop is mental diversity. Topics of diversity that people usually talk about are gender, age, or race, as those are the first three things we tend to notice about people. But managers can actually be selective or prejudicial toward the way their staff members think, tackle challenges, etc. Everyone has a different way of solving problems or handling tasks. “Our position is that all these different ways of thinking and evaluating information are equally valid and all have strengths and blind spots,” says Leiserson. But diverse mindsets can result in conflict among team members.

One way to work through conflict within the workplace is to host an off-site retreat designed for team members to air any concerns. Understanding that time and responsibilities often prevent employees from wanting to step away from their work for too long, Leiserson suggests that even a half-day or one-day event will be worth it so that the team has a chance to communicate about larger goals and how everyone can be more effective as a group. But in order for a retreat like this to be successful, it takes experience in facilitation by the manager to ensure the meetings are productive and don’t get derailed. Managers can address employees’ concerns through a “how to” exercise, developed by McVinney. Employees are instructed to share their complaints, but instead of wording them in a negative way, they can express them using the phrase “how to.” For example, if an individual’s complaint is that the IT team isn’t responsive, change the language to “how to ensure IT can be more responsive”—this will allow for a more positive and productive discussion. 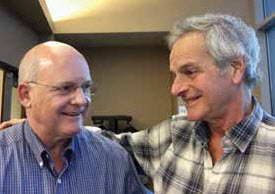 Charles Leiserson and Chuck McVinney, leaders of MIT’s Leadership Skills for Engineering and Science Faculty workshop. Another commonly difficult aspect of managing is determining how to best reward and motivate people. The Progress Principle, written by Teresa Amabile, the Edsel Bryant Ford Professor of Business Administration and director of research at Harvard Business School, focuses on strategies to promote motivation in the workplace. Amabile states that people are wellmotivated when they feel that, on a regular basis, they are making progress on meaningful work. Therefore, as a reward, managers should try to give an employee the choice of what project or type of work they would like to take part in. For example, a manager can outline some of the top challenges or objectives that the lab is trying to solve, and ask for the employee’s input on how to address those priorities and what role they would like to play in doing so. This is a way to make the employee’s work feel even more meaningful and personal to them.

“That is far better than any kind of gold stars, monetary compensation, or other form of praise,” says Leiserson. He notes that monetary or other types of recognition are still beneficial, but enabling individuals to make progress on meaningful work will show more success.

Interestingly, Leiserson notes that success— when measured by published studies or moving up the ladder within an organization—can actually be detrimental to a manger’s leadership. “The leading cause of ‘deafness’ among managers is success,” he says. “You always have to be willing to be a student again.”

The leadership workshop provides an opportunity for learning again, and enables lab managers to learn problem-solving techniques so their teams can spend their time productively.

“If you can learn some of these skills, you can be much more effective with your team and spread a lot of happiness,” said Leiserson.