Biologics, or biopharmaceutical products, refers to pharmaceuticals that are manufactured or extracted from living sources and play an important role in delivering treatment options for many diseases. These manufactured substances include hormones such as insulin, vaccines, and custom-designed antibodies to help combat a range of diseases such as rheumatoid arthritis, and are nearly identical to proteins found in the body.

Demand has grown significantly in recent years, raising concerns not only over regulatory issues, but also the cost of production in delivering high purity products. Biopharmaceutical proteins are produced in cellular expression systems using a host cell organism, specifically microbial cells, animal cell lines, and plant cell cultures. During the purification process, the substrates for growth, host cell components, and product variants must be removed.

How do impurities occur?

Process-related impurities in a biotherapeutic product are proteins derived from the proteome of the host cell and may result in toxicity, hypersensitivity, endotoxin shock, or affect the biological activity of the host cell protein (HCP) itself if not removed. Residual HCPs can also compromise the stability of the product over time. They may contain enzymes, such as oxidases and lipases, which gradually break down the therapeutic protein or excipient. HCPs can also mimic the action of therapeutic proteins in assays which can lead to product misformulation.1

Removing HCPs, therefore, from biologic products is vital to protect drug efficacy, stability, and safety. During production, the drug product is separated from impurities using chromatography and the remaining product analyzed for residual HCPs. However, low levels of residual HCPs may remain even after several purification steps.

The situation is further complicated by the fact that no regulatory guidance exists to set the acceptable limit of HCP in a product, so manufacturers can find themselves working blind. Biotherapeutics, however, are typically expected to contain less than 100 ng HCP per microgram of product.

Immunoassays like enzyme-linked immunosorbent assays (ELISA) are upheld as the gold standard for HCP analysis. Although ELISA testing methods are highly sensitive and offer high throughput, they have the disadvantage of being time consuming at setup, and expensive. ELISAs only measure total HCP content and are unable to identify individual HCPs which are inherently diverse. Biopharmaceutical companies have been looking for a more cost-effective method for scaled up production, which offers security of results while maintaining end product safety.

Mass spectrometry (MS) is recognized as a suitable complementary method of analysis to immunoassays. It offers a rapid setup and also allows for the identification of multiple protein analytes in a single run, saving time and driving efficiencies in the laboratory.

MS adds the benefit of being able to detect very low amounts of HCP in a non-targeted manner. In an end product where even trace levels of residual HCP can cause immunogenicity and affect the quality of the biopharmaceutical, this high discriminatory power to separate impurities in a high sensitivity analysis is critical.

Trapped ion mobility spectrometry (TIMS) and quadrupole time-of-flight (QTOF) MS can significantly increase the chromatographic resolving power for peptide analysis. The TIMS focusing and subsequent mobility separation occurs in the gas phase, adding the second stage of separation to LC-MS, and at the same time increasing sensitivity and confidence in compound characterization.

It takes around 10 years and an average cost of $2-3 billion to develop a new drug.5 Catching any problems early in the development process can bring potentially significant cost benefits. The advantages that TIMS QTOF-MS/MS delivers in both upstream and downstream pharmaceutical processing helps avoid contamination and consequent downtime and delays. The in-depth analysis required at the upstream stage requires runs of around 90 minutes. Analyzing downstream processes such as quality control (QC) and batch release demands high-throughput screening rather than the same sensitivity as upstream analysis, but HCP quantitation is often necessary using robust instrumentation. 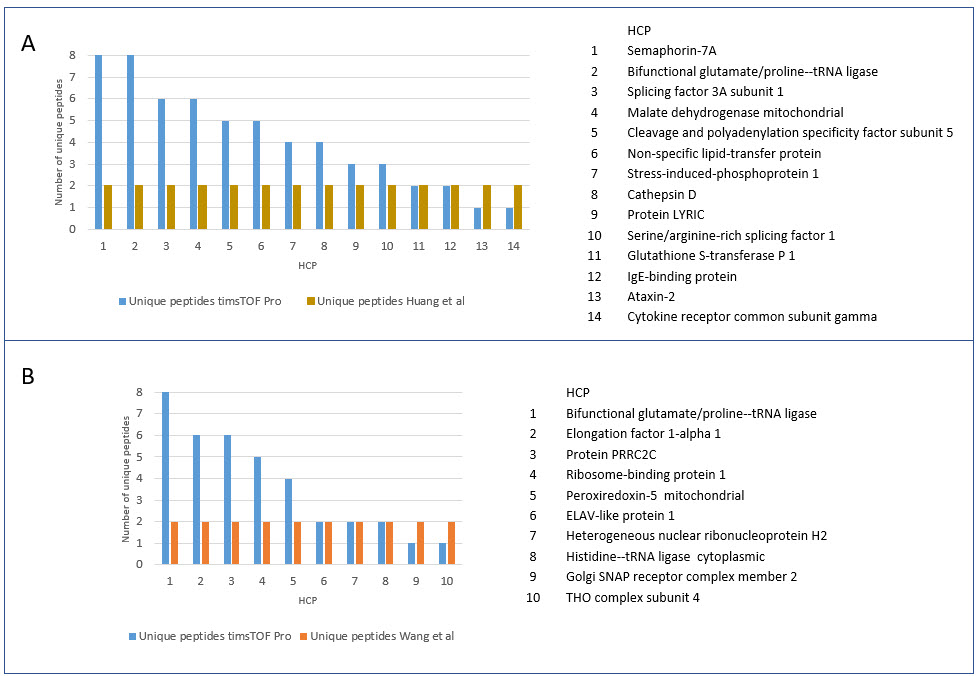 The depth of HCP identification provided by PASEF technology with TIMS QTOF-MS has been demonstrated using the native digest sample preparation method, and the HCP identifications have been compared to those reported by Huang et al. (native digest) and Wang et al. (native digest and HILIC fractionation, Figure 1). 167 HCPs were identified from a single dataset following separation of ~600 ng of the NISTmAb native digest sample with an integrated purification and separation platform using the 88-minute gradient, encompassing 79 percent (90/114) and 87 percent (52/60) of the HCPs listed in Wang et al. and Huang et al. respectively. A further 70 NISTmAb HCPs were identified which have not been reported elsewhere.

TIMS with PASEF enables the detection of a greater number of peptides, allowing higher levels of confidence in the identification of low abundant HCPs.

The physical property of molecules can be used as an extra parameter to confirm the presence of low abundant peptides. Collisional cross section (CCS) values are determined using gas-phase separation provided by TIMS, in a process that is more reproducible than LC retention times (RT). CCS values can be measured to combine HCP discovery and screening in one workflow using advanced MS systems, removing the need to include RT in confidence measurements and so making it easy to switch between different LC instruments and methods.

Recent research shows that the sensitivity of HCP detection can be extended by a factor of ~5-10 by using CCS values with accurate mass to identify ultralow abundant precursors which do not trigger MS/MS.8 In this study, two peptides for the known HCP collagen α-1(V) were identified when 30 and 10 µg were loaded, but only one was identified by MS/MS when the sample amount was reduced to 2 µg. Trace levels of the unidentified precursor were detected in the extracted ion chromatograms (EICs) from the 2 µg sample and the peptide identity was confirmed. 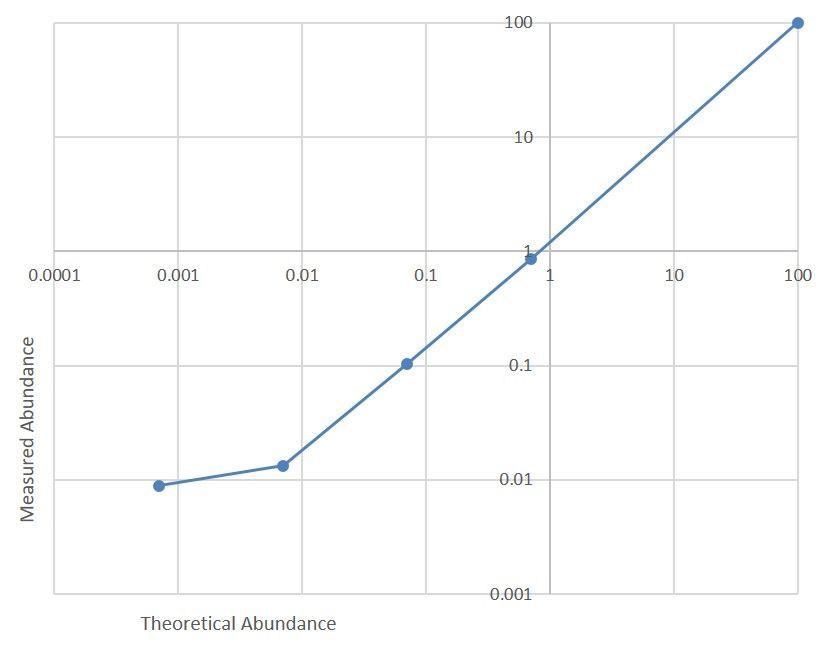 In addition to identifying HCPs, TIMS QTOF-MS/MS can quantify proteins across several orders of magnitude. To demonstrate this, a 200 ng NISTmAb sample was spiked with 4 ng Universal Protein Standard (UPS2) mix of 48 proteins at six different concentration levels and quantified using nanoLC TIMS QTOF-MS/MS with a 100-minute gradient. Figure 2 shows the linear response of the theoretical abundance versus the measured abundance of quantified UPS2 proteins in NISTmAb background. The high degree of linearity demonstrates this technique as a reliable proof of principle for identifying and quantifying HCPs. Greater sensitivity can be achieved using diaPASEF, a data-independent approach in which diaPASEF spectra are matched against a spectral library.

In today’s environment, biopharma labs cannot afford downtime, so the robustness of modern mass spectrometers is another significant advantage. Using advanced MS, the biopharma industry benefits from improved speed, sensitivity, and depth of coverage for HCP identification and quantitation with rapid techniques for HCP analysis. TIMS is a practical method that could significantly improve process efficiencies in purity control in the growing biopharmaceuticals sector.