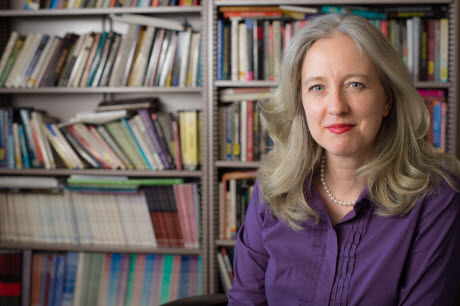 "Women have eliminated the gender gap in some respects," said Michigan State University sociologist Stephanie Nawyn. "But it’s problematic when you realize that women have still not completely closed the earnings gap."Photo credit: G.L. KohuthWomen are more likely than men to have a bachelor’s degree and a white-collar job, yet continue to earn less than their male counterparts, finds a new study spanning two generations in the United States.

Stephanie Nawyn, a Michigan State University sociologist and study co-author, said the findings reinforce the existence of a “gender revolution” – except when it comes to salaries.

“Women have eliminated the gender gap in some respects,” Nawyn said. “They now have more college education than men. They have higher occupational status than men. But it’s problematic when you realize that women have still not completely closed the earnings gap.”

Nawyn and colleagues analyzed U.S. Census socioeconomic data of more than 180,000 people at two points in time. The study looked at Latino and Asian immigrants in 1980 and then at their children’s generation 25 years later (in 2005), as well as non-Hispanic whites whose parents were not immigrants.

In 1980, men led women by a significant margin in bachelor’s-degree attainment, white-collar jobs and earnings, the study found. This held true for all three groups: Asians, Latinos and whites.

By 2005, the story had mostly flipped, with women in all three groups overtaking men in bachelor’s-degree attainment and white-collar jobs.

“Women have increased their mobility across generations better than men have,” Nawyn said. “In this sense, there has been a gender revolution.”

Both white men and women, for example, are much more likely to get a bachelor’s degree and a white-collar job than Latino men and women. In addition, whites on average earn $6,500 more per year than Latinos.

“It’s not that the children of immigrants aren’t doing better than their parents, because they are,” said Nawyn. “They just aren’t completely closing the gap with the white mainstream population.”

The study appears in the October issue of the journal Demography. Julie Park from the University of Maryland was the lead author; MSU’s Nawyn and Maryland’s Megan Benetsky were co-authors.

Music Classes Contribute to Higher Math Scores, but Only in High-Income Schools

Music Classes Contribute to Higher Math Scores, but Only in High-Income Schools