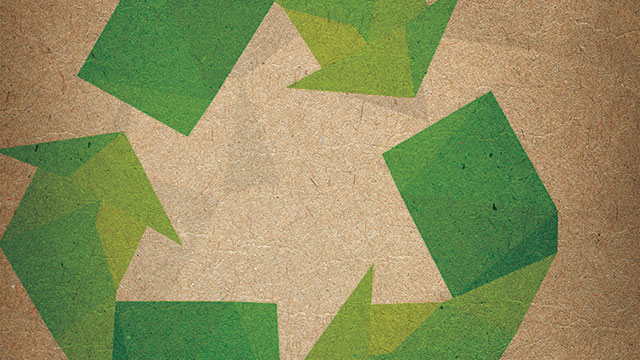 Tips for More Mindful Use (and Reuse) of Laboratory Water, Consumables, and Equipment

Laboratories present one of the greatest challenges and opportunities in sustainability. Due to energy-intensive equipment, round-the-clock operations, and unique ventilation requirements, they consume as much as five times more energy per square foot than typical offices do. On a university campus, laboratory buildings are often the largest consumers of water, the biggest producers of hazardous and nonhazardous waste, and the largest proportionate consumers of energy.

Over the past few years, scientists, facility managers, and many others have increasingly realized that it is possible to dramatically reduce the environmental impact of laboratories without compromising the integrity of research. This has propelled the rise of innovative, cost-effective solutions for improved laboratory sustainability, solidifying a permanent and much-needed shift in how scientists think about their labs as well as their labs’ impact on the planet.

In 2015, the nonprofit organization My Green Lab surveyed scientists at two international conferences about how they felt they could make their labs more “green.” Nearly 80 percent of the over 1,000 respondents mentioned reduced plastic use and/or improved recycling as potential areas for improvement. While plastics are a highly visible component of laboratory research, the sheer volume of plastics used in labs is likely larger than most scientists would imagine. A December 2015 Correspondence letter published in Nature last year reported that biological research accounts for an estimated 1.8 percent of total global plastic consumption. This is not insignificant; in fact, it is staggering. Yet in spite of these numbers and the huge potential to improve on them, laboratories have been largely absent from the ubiquitous campaigns promoting reduced plastic use and increased recycling.

The best way to address the pervasive plastic laboratory waste is to simply reduce the amount of plastic labs consume. A 2013 study published in Lab Manager showed that laboratories spend between 60 percent and 200 percent more on plasticware than glassware annually. The trend toward using plastic instead of glass can be reversed, and may even save the lab money. Using glass graduated cylinders instead of 50 mL conical tubes whenever possible is a simple way to reduce plastic use. Glass pipette tips and petri dishes can also be used in many cases, instead of their plastic counterparts. Viewing laboratory supplies as permanent, and not consumables, has several results that improve laboratory sustainability generally.

Another way to curtail plastic use is to purchase products that are produced with fewer resources. Several companies have redesigned their products to contain less plastic, including Eppendorf and LabCon. LabCon in particular now operates a zero-net plastic waste facility where scrap from tip and tube manufacturing is used to make their packaging. Though not a component of the consumables themselves, packaging is a reducible source overall of plastic waste for labs. Purchasing products whose packaging is minimized or made from recycled sources will reduce plastic consumption. Talking to vendors about ways to minimize or even eliminate difficult-to-recycle plastics like film and Styrofoam is also a good strategy for addressing plastic packaging waste. 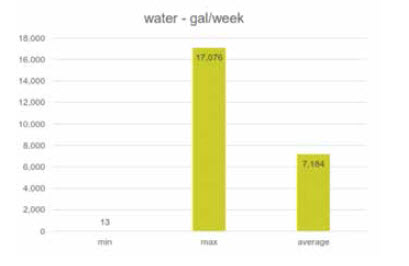 Data from UC Riverside Genomics Dept. Data from one autoclave showing the amount of water used per week. On average, ~7,000 gallons of water per week are used to run the autoclave.Although viable alternatives for some plasticware do exist, there are still many tubes, tips, and dishes for which there are no alternatives. In these instances, it is best to reuse products whenever possible, being mindful of potential issues with contamination and biohazards. For example, it is not advisable to use a single plastic pipette tip to load ten different samples into a gel, but it might be possible to reuse plastic pipette tips that are used to add buffer solutions to a DNA extraction column (after thoroughly washing them). In fact, there is little to no evidence correlating reuse with contamination, and many labs with limited budgets reuse their plasticware in order to reduce their consumption of consumables.

Related Article: Can You Clean Plastics in a Glassware Washer?

Reusing other types of plastic materials, such as Styrofoam, is usually easier for the lab and is a widely unheralded practice that already occurs in many facilities. Take-back programs for Styrofoam coolers, such as those offered by New England Biolabs and Sigma-Aldrich, may also be utilized as a means of reusing material.

For labs that are sensitive to issues of contamination, the next best option is to recycle. Any plastic that is not characterized as a biohazard or radioactive hazard may potentially be recycled. Several large biotech and pharmaceutical companies have large-scale waste diversion programs, including Thermo Fisher in Pleasanton, California, and Genentech in South San Francisco. Many university campuses are also diverting laboratory plastics, usually Types 1 and 2, in partnership with vendors and waste haulers.

Unfortunately most organizations do not have the infrastructure to divert laboratory plastics from their landfill waste. More often than not, this is due to a lack of communication between custodial staff, EHS, laboratories, and the waste haulers. Laboratory personnel are key to bridging these gaps, and have proven to be instrumental in bringing much-needed programs to their organizations.

Water is so deeply embedded in standard laboratory operations that the extent of its use is often unnoticed. Unlike single-use plastics, there is often little transparency into how much water is consumed in each process. A study conducted by S-Labs in the UK found that laboratory processes account for approximately 25 percent of all water consumed in a laboratory building. Independent audits of life science research buildings at a US university revealed that each building used around 12 mega-gallons per year, which is equivalent to the water use of 82 US households.

Therefore, even for facilities that are not located in drought-impacted areas, improving water efficiency is a smart idea. Distilled water use, single-pass cooling, and autoclave management all represent potential opportunities for water conservation. By simply rethinking how these resources are consumed, laboratories can conserve millions of gallons of water annually.

Distilled water should be used only when it is required for experiments, and not regularly as a substitute for tap water. The process of making distilled water is highly inefficient, with nearly three gallons of water required to make one gallon of distilled water.

Traditional chemistry labs often use single-pass cooling to cool down reactions. Single-pass cooling refers to a continuous flow of water that is circulated once through a system before being disposed of down the drain. Water running at between one and two gallons per minute can result in over 1,000 gallons of water per day being sent down the drain. Simply recirculating the water, or using air condensers, can conserve hundreds of thousands of gallons of water annually.

In an effort to conserve water, some labs have reconsidered their standard practices and begun using closed-loop systems, such as an ice bucket with a fish pump to recirculate chilled water. Others are using air condensers, such as Findensers, instead of single-pass cooling. In fact, many institutions have provided funding to laboratories willing to switch to an alternative method, as the water savings alone are sufficient to pay for the new equipment.

Autoclaves, or sterilizers, are another source of significant water use in labs. A recent study conducted by the University of California, Riverside, showed that a standard autoclave can consume at least 1,000 gallons/day. This is partially because autoclaves are often on single-pass systems like those described above, where the cold tap water used to cool down the hot water draining from the autoclave runs continuously. Putting autoclaves on closed-loop systems and installing water-saving devices known as Water Mizers can reduce the water consumption of autoclaves by up to 70 percent. Water Mizers work by sensing the temperature of the hot water effluent and allowing cold water to be released only when it is needed, thereby significantly reducing the amount of water being used.

New water-efficient and energy-efficient autoclaves are also now available for laboratories, and they may be a great alternative solution to the standard, larger autoclaves. 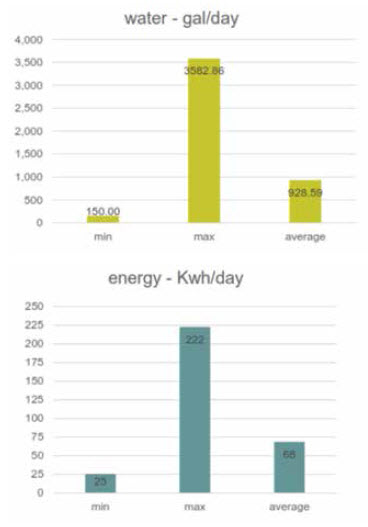 Data from UC Riverside Etymology Dept. Data from one autoclave showing the amount of water and energy used per day. On average, this autoclave uses ~900 gallons of water and 68 kWh per day.Despite the growing trend toward open lab areas and communal lab spaces, resources are often not commonly shared among labs. Resource sharing is perhaps one of the easiest ways for labs to reduce their environmental impact, and it brings the many benefits of increased collaboration.

Chemical and reagent sharing can result in significant savings, both for laboratories and institutions. Many EH&S departments have the infrastructure in place for labs to share chemicals, but few labs take advantage of it. If an organization does not have a mechanism in place to post and request extra chemicals, creating a departmental email list is a relatively simple way to achieve the same result.

Laboratory equipment and instrumentation sharing can be more complicated. With the exception of core facilities, these resources are rarely publicized. However, researchers stand to save hundreds of thousands of dollars in up-front and maintenance costs by sharing existing and underutilized equipment with their colleagues. Institutions also benefit from this type of resource sharing, as a reduction in total equipment leads to a reduction in energy consumption, and a further reduction in waste when the equipment is no longer useful. UC Santa Barbara saw the potential of a campus wide equipment sharing program and now hosts a website that lists over 300 pieces of shared equipment. For more information, visit www.sharedinstrumentation.ucsb.edu. In addition, in the UK, over 50 percent of universities use an online platform called Warp It that allows staff in labs to get, give, and loan surplus or underused assets on the same campus, or between organizations. Warp It has recently launched in the US in order to assist US organizations with sharing equipment.

It’s time to start rethinking laboratory practices and being smart about laboratory operations. This Earth Month, make the commitment to be more mindful about the use of energy and water in the lab, and take steps to reduce and reuse laboratory supplies and equipment. Individual actions can have profound effects, and together the scientific community can set the example for what it means to live sustainably.

Being a Lab Manager Is Not Easy

Being a Lab Manager Is Not Easy