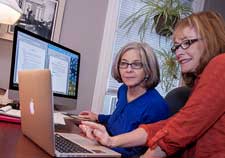 As part of her research, she is analyzing the results of a 2012 survey of 840 URI staff members to identify how workplace flexibility in Rhode Island contributes to a robust economy.

“Today, dual career families are the norm, so we have a virtually gender-balanced workforce that’s more stressed and busier juggling multiple demands,” Silver said. “And yet we often still rely on workplace policies that are from the days when there was a breadwinner/homemaker model, something that is much less common today.”

Her study is funded by the College and University Research Collaborative, a partnership of Rhode Island’s 11 colleges and universities that work with senior leaders in Rhode Island state government to determine research priorities. This year, scholars are focusing their research on economic development in the state, especially in the areas of infrastructure, manufacturing, regional competitiveness and workforce.

Established in 2012 with funding from the Rhode Island Foundation and from state government, the Collaborative includes a leadership team made up of the presidents of each of the participating partner institutions. A panel of policy experts appointed by government leaders identifies research areas of importance to Rhode Island with the goals of increasing the use of academic research in policymaking and providing an evidence-based foundation for government decision making in the state.

"The Research Collaborative provides a vital link between policy makers and the research power at all of Rhode Island's colleges and universities,” said Katharine Flynn, executive director of the URI Business Engagement Center and a fellow of the Collaborative. “Through the Research Collaborative, URI can play a significant role in the economic development and workforce development landscape of the state, which is our mandate as the state's only public land grant university."

Bodah is analyzing the essential knowledge, skills and abilities for what he describes as “decent-paying, large and growing occupations” in Rhode Island. “We hope our research informs decisions about workforce development and helps individual jobseekers understand some of the basic attributes needed for success in the labor market,” Bodah said.

Pearson-Merkowitz is conducting two studies. One, in collaboration with Malloy, examines the expected economic impact in Rhode Island from the expansion of Medicaid, based on an analysis of 25 years of data about Medicaid coverage and economic and employment growth in all 50 states.

Her second study, conducted with honors student Rachel-Lynn Longo, assesses the effect of state-funded paid family leave policies. “We reviewed all of the studies to date on state paid family leave to see what the likely effect of the new Temporary Caregiver Insurance policy would be here in Rhode Island. We also used that data to make suggestions about how Rhode Island might improve the program based on what we know about outcomes in other states,” she said.

The Collaborative will release the findings from these reports, in addition to its other current research projects, over the next several months. For more information about the Collaborative, visit www.collaborativeri.org.

Many American Workers Plan to Change Jobs in Coming Year

Many American Workers Plan to Change Jobs in Coming Year

Who in Ecology Has Been Most Impacted by COVID-19?

Who in Ecology Has Been Most Impacted by COVID-19?