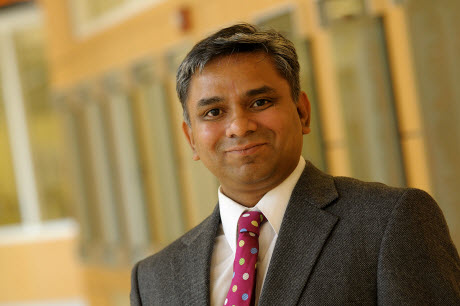 Workers leave both good bosses and bad bosses, a finding that companies can use to their strategic advantage, according to research from Ravi S. Gajendran, a professor of business administration at Illinois.Photo credit: University of Illinois College of BusinessCHAMPAIGN, Ill. — When fast-rising employees quit their jobs for better pay or more responsibility at another organization, the knee-jerk reaction may be to blame their leaving on a bad boss. Although the common perception is that workers join companies but leave managers, new research by a University of Illinois business professor shows that workers leave good bosses, too–and for companies, there may be a silver lining to their departure.

According to Ravi S. Gajendran, a professor of business administration at Illinois, an organization’s former employees–or “alumni”–can potentially be important strategic assets in the future, provided they leave on good terms.

“If you have a good relationship with an employee who’s left to join a client or competitor, you can leverage that relationship and potentially use them as a source of future business or as a back-channel source of information,” he said. “Therefore, thinking of ex-employees as a strategic constituency is something more organizations should start doing.”

Using data from interviews with ex-employees, Gajendran and his co-authors found that among employees who quit, pre-turnover “leader-member exchange”–that is, the quality of the boss-worker bee relationship–is positively related to higher salaries and greater responsibility in a worker’s next job as well as the goodwill they feel toward their former company.

Related article: Are Those Jerks at Work Dragging You Down?

So why do workers leave despite having such a high-quality relationship with their manager?

“What we find is, if you have a good manager, they’re going to invest in you, they’re going to develop you, you’re going to become a better, more competent employee, which also means you’re more in-demand as a worker,” Gajendran said. “You could move up in the organization, but that path may not always be available. Managers also might not want you to go up internally because then they’re losing a valued employee. So it means you’re attractive to employers in the outside job market.

“And that’s why people leave good managers, precisely because good managers invest in and develop their employees. They typically get a better job with more responsibilities at their next employer.”

While that scenario might leave managers in a bind, Gajendran’s research finds that there’s a silver lining to valued employees leaving good managers.

For firms in industries with tight labor markets, companies are increasingly seeing the value of alumni, with some creating online social networks for former high-level employees to keep in touch. Others organize social events for ex-employees such as wine-tastings and golf tournaments, which can potentially help organizations tap alumni expertise and alumni networks, or serve as a “See what you’re missing?” recruiting pitch, Gajendran said.

Other research–including some from Gajendran’s co-author of the paper, U. of I. business administration professor Deepak Somaya–points to the benefits of having alumni at other firms to reap a competitive advantage.

“Our paper shows that even employees who are leaving can be valuable somewhere down the line,” Gajendran said.

As a result, companies need to pay closer attention to the “off-boarding” process.

“Companies typically make a great effort in the ‘on-boarding’ process–that is, how to get employees up and running. But scant attention has been paid to the off-boarding process,” Gajendran said. “When people are leaving, you shouldn’t just stop with an exit interview and a pat on the back. You should be thinking of them as a contact you can tap in the future. So it’s a potential future asset that you want to think strategically about.”

According to the paper, it also helps if managers at least make an overture to retain employees, even if they think it’s unlikely they’ll accept the offer to stay.

“If managers don’t make an attempt to retain an employee, the employee thinks, ‘Look, I put in all this effort and no one seems to care…’ Those ex-employees are less likely to help the organization later,” Gajendran said. “Managers who make a good-faith attempt at retaining the leaving employee actually elicit the most goodwill from alumni. When people believe that they were valued by their former organization, they are more likely to have goodwill toward the organization and, thus, more likely to be a source of future benefits.”

The findings are especially apt in industries with a “high-velocity labor market” or places like Silicon Valley where there is a fair amount of employee churn, Gajendran said.

“If you’re a manager who has poured a lot of resources into developing an employee, your first instinct might be to take their leaving badly,” he said. “But it’s to your advantage to keep good ties with them. Recognize that it’s not personal but an opportunity to build a relationship with someone from another company.”

Gajendran’s and Somaya’s co-authors are Xiangmin Liu and Sumita Raghuran, both of Pennsylvania State University.

The study will appear in the journal Personnel Psychology.