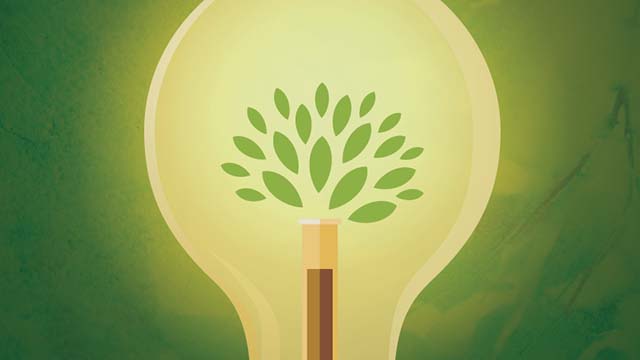 Opportunities for conservation in research laboratories are varied and abundant, yet scientists often focus their attention on the most visible form of lab waste—plastic—and overlook one of the largest contributors to greenhouse gas emissions: electricity. Laboratories consume three to five times more energy per square foot than do typical offices due to round-the-clock operation of energy-intensive equipment, 100 percent outside air requirements, and high airflow rates. A report published in 2015 by My Green Lab and the Center for Energy Efficient Labs (CEEL) found that loads from a dozen categories of commonly used lab equipment consumed 8–32 TWh annually in the United States. This is equivalent to the energy consumption of over four million homes, just over three percent of the total homes in the United States. This article will explore some intuitive, as well as some less apparent, ways to reduce energy use in labs.

A single ultra-low temperature (ULT, -80°C) freezer draws as much energy as an average domestic household. The 2015 CEEL report estimated that the United States contains at least 580,000 ULT freezers, consuming 4 billion kWh/year. There are a further estimated 750,000 -20°C freezers and 960,000 laboratory refrigerators in the United States, which collectively consume nearly the same amount. Fortunately, it is easy to significantly reduce the energy consumption of these units. Defrosting freezers not only optimizes performance, but in many cases also reduces energy consumption by at least 10 percent. Taking the time to inventory samples can reduce the number of samples relegated to long-term storage, in turn reducing overall refrigeration requirements. Another easy win is to increase the temperature set point of ULT freezers to -70°C from -80°C, also known as My Green Lab’s “-70 is the new -80” initiative. This small change has been shown to reduce energy consumption of ULT freezers by an average of 37 percent, while concomitantly prolonging freezer life by reducing compressor strain.

These and other best practices for cold storage management are summarized in the North American Laboratory Freezer Challenge, a competition launched in the fall of 2016 by My Green Lab and the International Institute for Sustainable Laboratories. Labs that have participated in the challenge previously have not only realized energy savings upward of 3,600 kWh/year, but have also found that these best practices lead to safer, more efficient ways of managing samples.

Though a staple in the residential and commercial sectors, ENERGY STAR has been largely absent from the laboratory market until very recently. Nearly ten years ago, recognizing the widespread use of energy-intensive equipment in laboratories, and in particular the large number of cold storage units consuming 10–30 kWh/day, a pioneering group engaged with the Environmental Protection Agency and ENERGY STAR to establish standards for laboratory cold storage. This process involved multiple stakeholders, including manufacturers, building owners and operators, scientists, and nonprofit advocates for energy efficiency. Together, the team worked for a decade to establish specifications for laboratory refrigeration, including ULT freezers, -20°C freezers, and refrigerators.

Although the ENERGY STAR label may not be widely available as of the printing of this article, scientists should use the related specifications to guide their purchases for energy-efficient cold storage units. In some cases, rebates may even be available for these products.

Although refrigeration units consume an outsized proportion of the energy used in labs, other categories of equipment, such as water baths, heating blocks, temperature-controlled centrifuges, lasers, ovens, and even computers, consume more than many scientists realize. Due to the wide variety of products in each category and the nascent state of the field, it has been difficult to gather definitive consumption data. However, the chart below, taken from the 2015 CEEL report, demonstrates the extent of the opportunity.

The simplest way to sustainably operate equipment that has a heating or cooling element is to turn it off when it’s not in use. However, the urgency of experiments makes this challenging, as equipment needs to be ready to use at a moment’s notice. Enter outlet timers. Outlet timers have been employed in labs across the country to turn off equipment, usually at night, and, perhaps more important, to turn it on in the morning. With properly set timers, water baths and heating blocks will always be at their correct temperatures when the first person enters the lab. And since equipment has not been left on overnight, the lab will see reduced energy use and decreased risk of fire. A $10 investment in an outlet timer can save a lab over $100 annually in electricity costs and reduce carbon emissions by more than 2.5 tons over the lifetime of most equipment.

Airflow volume in a fume hood is manipulated by adjusting the height of a movable sash, which acts as a barrier between the inside of the hood and the rest of the lab. The sash should be raised when working in the hood and, in most cases, should be lowered when work in the hood is complete to ensure the safety of laboratory personnel. In a VAV fume hood, lowering the sash also reduces the speed of the exhaust fan and the volume of air being exhausted by the VAV ventilation system, reducing energy intensity by upward of 40 percent.

On the surface, the practice of green chemistry—the design of chemical processes and products that reduce the generation of hazardous waste—seems to have little to do with energy consumption. However, the two are in fact intrinsically linked.

The 12 Principles of Green Chemistry comprise specific guidelines to follow when choosing chemicals. These principles are applicable across disciplines, relevant to biologists, experimental physicists, and chemists alike. The principles recommend using microchemistry, for example, and the selection of benign alternatives whenever possible. These commonsense approaches to reducing hazardous waste also reduce unnecessary exposure of personnel to hazardous materials. MIT created a Green Chemical Alternatives Purchasing Wizard that can be used to select benign alternatives, and MilliporeSigma’s website (formerly EMD Millipore and Sigma-Aldrich) lists over 700 green alternatives for commonly used chemicals and reagents.

As suggested earlier, laboratories have strict ventilation requirements. One of the primary reasons laboratories consume vastly more energy than office spaces is that they are ventilated more frequently using 100 percent outside air. These ventilation requirements are commonly referred to as “air exchange rates” or “air changes per hour.” It is not uncommon to find standard laboratory spaces with air exchange rates of 10–12 per hour in an effort to reduce the risk of exposure of personnel to noxious and toxic chemicals. A recent movement, pioneered by the University of California, Irvine’s (UCI’s) Smart Labs Program, has called for facilities to rethink air exchange rates in their laboratories. By actively sampling the air in its labs, UCI has been able to align the number of air exchanges with chemical exposure risks. This has reduced energy consumption by as much as 50 percent in some instances, leading to millions of dollars in annual energy savings. How does this relate to green chemistry? Labs that practice the Principles of Green Chemistry have less exposure to hazardous materials and, thus, require fewer air changes per hour.

The work done at UCI inspired the Department of Energy to launch a Smart Labs Accelerator Program in 2017. This program challenges institutions to reduce laboratory energy consumption by 20 percent over the next ten years. By taking the simple steps outlined above scientists can help their organizations meet this goal.

Laboratories are the largest and most intensive consumers of energy on university campuses, accounting for up to 60 percent of total energy use despite occupying less than 30 percent of total space. Nonacademic institutions also find that laboratories consume a similarly disproportionate amount of energy. Fortunately, scientists have a great deal of control over how much energy they use. By employing best practices for cold storage management, purchasing ENERGY STAR–rated equipment whenever possible, turning off equipment at night, and closing fume hood sashes, scientists have the ability to reduce the energy consumption in labs by more than 10 TWh/year nationwide. Moreover, by working with facilities management and choosing benign alternatives over known hazardous substances, scientists can affect a substantial change in the overall energy consumption in their buildings.

Conserving natural resources through energy reduction not only benefits the environment, but in a few pilot programs it also benefits scientists. Two well-known universities in the United States have already begun piloting programs in which overhead costs are reduced for labs that reduce their energy consumption. What a beautiful way for scientists to work toward mitigating climate change while simultaneously increasing funding for their research!