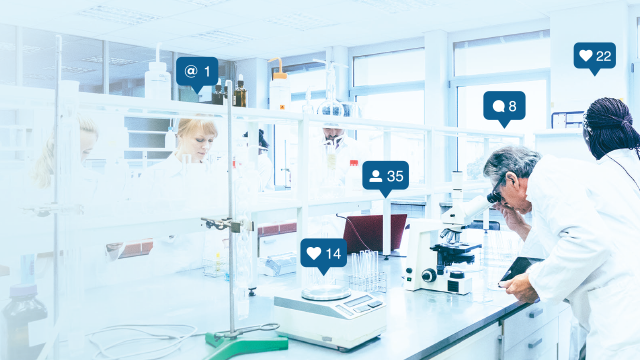 On the sunny side, global demand for Facebook, Twitter, YouTube, and company continues to boom. Social media boasts more than 2.5 billion users, a good third of humanity.

But when it’s good, scientists say nothing delivers like the right tweet or “vlog” (video blog). It’s routine for attending scientists to fire up Twitterstorms amidst national conference proceedings. So social media isn’t about to go away. Marketing? Look in any lab and you’ll find scientists who cross-promote their work and brand on multiple complementary platforms.

The conversation is changing

Studies have demonstrated the link between social media prominence and increased citations, and polling data reflects a gradual uptick in usage. But many researchers struggle with the axiom that self-promotional activity is an anathema, while a good many others fail to discern the value proposition in social media engagement—the “What’s in it for me?” part.

Besides blowback from colleagues who take a dim view of social media engagement, researchers who market themselves must contend with the nature of the social media beast. Legitimate science risks being distorted into pseudoscience through clickbait headlines that entice readers, a.k.a. “scienceploitation.”

Hype is not the only problem. There’s less civility to go around these days, especially online. According to one study, the situation is aggravated by the use of mobile devices like cell phones—increasingly the instrument of choice.

But the conversation is changing. Generational differences that currently account for the great usage divide are now in play, as more baby boomers retire and are replaced by internet-savvy millennials confronted by the funding dilemma of Trump administration budget cuts in times of general austerity. Many newcomers carry substantial educational debt they are eager to discharge.

Selling themselves via social media—marketing their research and building their brand to further careers and scientific objectives—is no great leap of faith for younger researchers. It’s already a way of life, and many are on a mission to change the perception that social media competence is a soft skill for scientists.

Tweet your own horn. Post or perish. Instead of asking why, more scientists are asking how. Industry chiefs and academic department heads are issuing social media usage policies. Workshops and in-house social media instruction are on the rise.

As talk turns from theoretical to practical, the concept of marketing oneself via social media is in the throes of a metamorphosis, from an abstract to an art.

Consider Marc Kuchner’s proof of social media’s salutary impact. By turns, Kuchner is a NASA astrophysicist at the Goddard Space Flight Center, a country music songwriter, and a social media champion who entered the fray with his 2012 book, Marketing for Scientists—How to Shine in Tough Times, now in its third printing.

Kuchner has since expanded his offering to include professional development workshops, a blog, and a Facebook group, reflecting the increased demand from the scientific community for help navigating social media’s oft-choppy waters. He operates in a collaborative online space (“Marketing for Scientists”) that features researcher inputs from different disciplines and links to sites recommended by members of his Facebook group.

Kuchner contends the concept of “marketing” gets an undeservedly bad rap. Traditional marketing revolves around the “four P’s” of product, price, placement, and promotion, but Kuchner shifts the focus to marketing’s very essence— the process of satisfying consumer wants and needs.

“Branding” is another taboo that Kuchner embraces as “the set of all expectations consumers have about a company or product.” A reputation for quality work is a prerequisite for rewarding social media outreach, regardless of whether intended consumers are government agencies, the general public, funders, colleagues, collaborators, or conference attendees.

Social media activity “is no substitute for doing high-quality science,” warns Dr. Bill Sullivan from the University of Indiana School of Medicine. “If you don’t have quality papers or blog posts to promote, if you don’t do top-quality work or reporting that is reliable, social media is not going to serve you well, and the attention you draw could sully your reputation.”

Marketing isn’t just about great strokes and polished presentations. Every online interaction is an exercise in marketing. People remember who’s polite and responsive and who’s not.

Related Article: Researchers Making Better Use of the Social Network

We appreciate receiving timely communications that keep it tight and tidy. Think of it as good customer service.

The most productive marketing, asserts Kuchner, among others, turns out to be all the little things that go into relationship building—a far cry from crass salesmanship.

“There are walls between universities, walls between research groups, walls between one scientist and another,” says Kuchner. “Each wall between scientific subcultures can only be penetrated by a real, organic human relationship.”

Kuchner concludes his book with a “cheat sheet” for scientists who venture forth digitally. His tips include:

The digital age is ripe for judicious self-promotion. Feeling the need to acquire more scientific capitol, maybe burnish your brand? Do good science. Develop a network. Post online material of real value (satisfying “What’s in it for me?”) and keep it up. Enjoy the bounce.

Studies and reports from the field boost up best practices. Who knew that using emojis—digital images and icons like smiley faces—is a characteristic of social media influentials? Or the reciprocity effect created by clicking Facebook’s “like” button—users do this to strengthen relationships. Consider the sociologist who sent out 600 Christmas cards to strangers and got 200 back. That’s the power of reciprocity.

Visuals are in, text less so. We process visual material quickly, and color commands attention and increases retention. “Video is a common feature among…Facebook posts with the highest levels of user engagement,” according to a 2018 Pew Research study.

Humans are hardwired to respond to visual marketing—on Facebook and other platforms, a profile photo is the first object the eye fixes on. On Instagram, photos with real (not stock) faces get substantially more likes and comments; the same impulse that makes selfies so popular. Do predominantly visual platforms like YouTube, Instagram, and Snapchat have untapped marketing potential?

When some text is called for, as with Twitter, make it short and snappy like a newspaper headline, using robust, everyday nouns and verbs. Tapping into the networking value of Twitter requires mutually satisfying interaction with individuals, so hold off on the one-way communications.

All successful social media engagement requires an ongoing commitment, but text-based blogs are the most demanding platform. Without fresh material, your audience will disappear.

Blogging is conversational, and don’t forget to use “you” more than “I”—the better to engage. If you don’t enjoy writing, look elsewhere. Some bloggers become recognized experts in their field, sought by media and invited to speak at conferences.

As so often happens, that’s not because they’re the most knowledgeable, but because their writing is clear, concise, and de-jargoned. If a news outlet interviews you or uses your research, post its logo—say the CBS eye—on your web page to enhance your brand. The better bloggers write many of the better papers and grants to plump up their CVs.

Although scores of millennials abandoned Facebook after the recent Cambridge Analytica data scandal, it still runs second to Twitter as the most popular social media platform among scientists. These two digital giants have become the primary source of news and information for a majority of Americans, giving researchers ample opportunity for timely engagement.

But that’s just for starters. Platforms with a STEM orientation geared toward career advancement abound; LinkedIn is the favored platform of many scientists for “managing your professional identity.” A diverse set of “social ecosystems” support industry and academic researchers through networking sites, collaborative project spaces, and online content communities. So many choices, and one final bit of advice from scientists who know the score: Don’t force it.

Using Social Media to Guide Your Next Lab Purchase

Using Social Media to Guide Your Next Lab Purchase