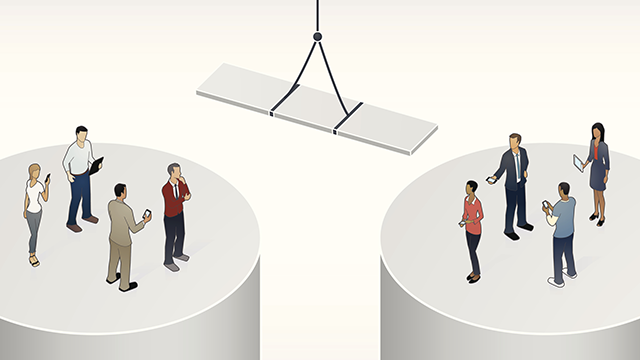 “Us” and “them” are terms many leaders and employees use to separate their department from other departments within the same organization. For the past 100-plus years—and still true today—the constant stress between departments within the same organization has been an issue. Customer service vs. sales. Finance vs. sales. Engineering vs. operations. The real issue is not the separation of departments, because they are separated by responsibility and duties. The real issue is when internal departments blame or resent one another. One leader might say, “We have to do their job,” or, “We have to do better because they can’t,” etc. Most likely, if a person has been an employee or manager for any small to large sized company, they have experienced the danger of “silos.” The key to building stronger teams and thriving cultures starts with removing silos. Here are the three steps any team can implement to remove the silos.

Step 1: Recognize who is responsible

The most common mistake in addressing silos in an organization is when a leader looks for other leaders to blame for the silos in the organization.  A leader must believe that they, themselves, are the ones who hold the blame, and, more importantly, that they are the ones with the responsibly to remove the silos. Here is the good news—with responsibility comes power. The manager who recognizes their role in creating silos is also the one who has the power to remove the silos and build a stronger team.

Observation: Internal silos are like old feuds between two families. Most of the employees don’t like or respect the other team, yet they have never met them or have never personally been given a reason to feel the way they do. Most of the employees’ feelings are created from the words, the feelings, and the actions of their leader. This is similar to a kid not liking another kid simply because his grandpa did not like the other kid’s grandpa.

Leaders must own the responsibility to lead with humility and power.  Humility is not being quiet or insecure; it is about being so powerful that you can be a servant without sacrificing your ego.

Serving out is where the power of removing silos begins. A leader must believe and teach their employees that part of their job is to serve the other departments. Not from a position of weakness, but from a position of empowerment. When the sales team goes to the engineering team and says, “What can I do to make your job better?” they show they have the power to make a difference and they are choosing to use it to serve others.

Observation: When a leader’s employee fails, but did everything they could, the leader says, “You did your best,” but when the employee of another team a leader does not know fails, they might say, “They have a different standard than we do,” or, “We have to pick up their slack.” These comments and beliefs are not malicious in intent, but ego-driven, and, in most cases, without merit.

Live it: The leader must be the first to reach across departments and share their intent to serve the other leaders. A leader must take real action that shows the other leaders and their teams how to serve others. A leader must also sustain this belief and activity. An example of this would be if a person only goes to a gym one time or for one week. They don’t achieve any real change, and no matter how long a person goes to the gym, once they stop going, they will most likely get out of shape. This serving out is not a short-term activity, it is a cultural change that will be required until one is no longer a part of the team.

Teach it: A leader must not believe that because they hire professionals, they don’t need to teach them anything. Serving out is done by very few, and if a leader can teach their employees how to serve out, it is a value that will better their employees’ lives and careers. A leader’s job is to teach, not manage.

Demand it: This whole world is filled with leaders and employees knowing what to do, but not actually doing it. A leader’s willingness to hold their team accountable affects their ability to serve out, as as well as their ability to effectively lead their team. Serving out is, “Treating others the way you want to be treated.” It is just the right thing to do for everybody. If an employee is not willing or able to serve out, then they should get out. It only takes one person to weaken a strong team. A leader’s job is to protect that team from outside threats, as well as inside threats.

Serving out is not some over-the-top noble idea or righteous behavior. It is the right behavior, which rewards those who serve. When leaders and employees start serving other departments before they serve themselves, the others will in turn serve them 10 times over. The most successful leaders in all industries create a serve-out culture (even though they may not call it this), and, most importantly, you don’t have to ask them—their peers will share how they do it! The power of leadership, coaching, and success is based on a person’s willingness to serve others and help them get what they want, and, in turn, they will get rewarded with what they want.

Nathan Jamail is author of the best selling Playbook Series including his latest book “The Leadership Playbook.” Nathan is a top international motivational speaker and expert on leadership and employee coaching. As a former executive director, business owner, and sales professional, Nathan is an expert that teaches from experience. Nathan has helped thousands of great leaders become great coaches. You can find more information about Nathan at www.nathanjamail.com and follow him on https://www.facebook.com/jdgroup/

What to Expect at the 2023 Leadership Summit

What to Expect at the 2023 Leadership Summit

How Laboratories Can Lead During Challenging Times

How Laboratories Can Lead During Challenging Times