Cameron AndersonPhoto courtesy of UC Berkeley Haas School of BusinessForget intelligence or wisdom. A muscular physique might just be a more important attribute when it comes to judging a person’s leadership potential.

Take Arnold Schwarzenegger whose past popularity was a result of his physical prowess as a “Mr. Universe” bodybuilder. In the 2003’s historic recall election, the physically imposing Schwarzenegger easily defeated California Governor Gray Davis who is arguably weaker looking than “The Terminator.”

Coincidence? Maybe. But now there is also real evidence that physical strength matters.

Study participants in a series of experiments conducted by Cameron Anderson, a professor of management at UC Berkeley’s Haas School of Business, and Aaron Lukaszewski, an assistant professor at Oklahoma State University, overwhelmingly equated physical strength with higher status and leadership qualities. The paper, “The role of physical formidability in human social status allocation,” is forthcoming in the Journal of Personality and Social Psychology.

Related Article: What Makes a Leader? Clues From the Animal Kingdom

The experiments first measured the strength of various men using a handheld, hydraulic Dynamometer that measures chest and arm strength in kilograms or pounds.  After being rated on strength, each man was photographed from the knees up in a white tank shirt to reveal his shoulder, chest, and arm muscles. This way, researchers were able to control for reactions to height and attire rather than strength. 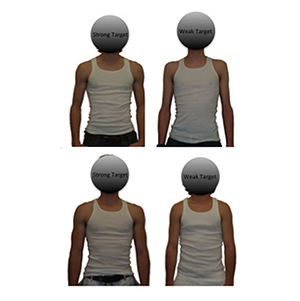 Experiment participants were shown pictures of men with differing levels of physical fitness and asked to rate each one.Image courtesy of UC Berkeley Haas School of BusinessIn one experiment, groups of men and women—about 50-50—were shown photographs of the different men on a computer screen. Before the participants saw the photos, they were told that they would be rating people who had been recently hired by a new consulting firm. The participants were asked to rate each subject on how much they admired him, held him in esteem, and believed he would rise in status. They were also asked questions such as, “Do you think this person would be a good leader?” and “How effective is this person dealing with other in a group?”

“The physically strong men in the pictures were given higher status because they are perceived as leaders,” says Anderson. “Our findings are consistent with a lot of real examples of strong men in positions of power.”

In another experiment, to further test their results, the researchers used Photoshop to switch the bodies of the strong and weak subjects. For example, a weak man’s head was depicted on a strong man’s body, and vice versa.  The result: participants rated the weak men with stronger, superimposed bodies higher in status and leadership qualities. 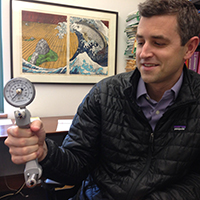 The experiments first measured the strength of various men using a handheld, hydraulic Dynamometer.Photo courtesy of UC Berkeley Haas School of BusinesThe final experiment focused on the height factor. Using Photoshop again, the researchers photographed the men in three different lineups. From right to left: 1) two tall men and two short men; 2) two short men and two tall men; and 3) four men of equal height. In all, each subject was manipulated so he appeared short, tall, and of equal height to the other men in the lineup. The participants’ responses indicated that men of taller stature were perceived to have more strength; as in the other experiments, stronger subjects were rated higher in leadership and status.

The researchers say their findings also dispel the popular explanation that the strong succeed by aggressively intimidating their rivals into submission.

"Strong men who were perceived as being likely to behave aggressively toward other group members were actually granted less status than their apparently gentler counterparts,” says Prof. Lukaszewski. “Together, the results suggest that the conferral of status upon formidable men, perhaps counter-intuitively, serves a fundamentally pro-social function–to enhance the effectiveness of cooperation within the group."

This phenomenon apparently applies to men only. There was little effect on participants’ perception of leadership skills when they were shown physically strong vs. weak women.

So, do smaller, shorter, or less formidable men have to work harder to gain status? Not necessarily.

“Perceived strength does give people an advantage but it’s not make or break,” says Prof. Anderson. “If you’re behaving in ways that demonstrate you are a leader or are not a leader, strength doesn’t matter.”