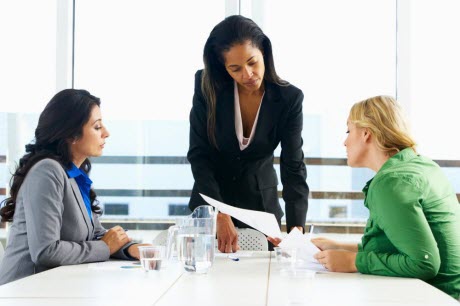 A recent study found that women make more ethical business decisions.Courtesy of Dick Jones CommunicationsThe study examined the associations between CFO gender, board gender diversity and corporate tax evasion through 20 years of data spanning 1991-2011. They found that women CFOs in the study were indeed less likely to evade taxes than their male counterparts, and they also confirmed that having a “critical mass” of women making up at least 30 percent of the board lets a company reap the benefits of gender diversity.

Ya-wen Yang, one of the authors of the study and assistant professor of accounting at Wake Forest University School of Business, says that having women across executive and corporate leadership roles reduces the likelihood of tax evasion.

“Studies have found that women and men make ethical decisions differently, and that overall, women are more ethical and less likely to take risks than men,” she says. “But for gender diversity to fully benefit a company, there needs to be a critical mass of women in both executive roles, like the CFO, and governance roles, like directors."

Interestingly, though, they found that when a company has an all-male board of directors, the gender of the CFO doesn’t affect corporate tax evasion—having at least one woman on the board was necessary for the female CFO to make more ethical decisions.  Also, when a board of directors includes women but has a male CFO, the women’s presence on the board actually leads to more tax evasion.

“Our findings are consistent with other studies and show how much the gender of the person in a leadership role affects the behavior of the board and their decision-making process,” says Yang.

These findings have a particular significance for hiring decisions, especially at the executive level.

“The CFO is still a male-dominated position. The percentage of female CFOs in the S&P 500 is only 10 percent,” says Yang. “If the people who make executive hiring decisions understand the benefits of hiring women in these roles, we might see that change in the near future."

This research is part of a working paper coauthored with Andrea Kelton at Wake Forest University School of Business and Allison Evans at the University of North Carolina-Wilmington.