Scientists use models to unravel how something works. If you’ve ever taken variously sized balls and arranged them as the planets in our solar system, then you’ve made a model. If you put that model solar system into motion, with the planets traveling through their orbits, then it’s a simulation. Although many people define modeling and simulating in very specific ways, many experts use the terms interchangeably. In any case, the interest comes from the results, not the definitions of the processes. Furthermore, this field is on fire.

It’s one thing to make a model that you can see, but imagine making a model from numbers. In computational modeling and simulation, you’d define your planets by size and weight. Then, you’d use an equation to describe each planet’s motion. Using the laws of physics, you could put the solar system into action. Even more interesting, you can perturb the system, by tipping a planet off its axis of rotation, for example, and see what happens.

Some of today’s most exciting modeling is taking place in the fields of chemistry and biology. Part of the interest comes from exploring some of the oldest questions in all of science, such as “What makes something burn?” Modeling and simulation also take on some of the newest questions, such as “How does an organism’s entire genome control its biochemistry?” To answer these questions, teams of scientists often work together. 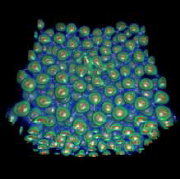 This image shows the electron density obtained from a density functional theory calculation performed with the grid-based projector-augemented wave method code. This visualization - run on the Intrepid and Mira supercomputers at the Argonne Leadership Computing Facility - was used to model batteries and other materials. (Image courtesy of Argonne National Laboratory)Making mechanisms from “magic”

To provide an analogy for modeling and simulation, Jeff Hammond, Ph.D., assistant computer scientist at Argonne National Laboratory in Lemont, Illinois, described a magic trick. “If you go to a magic show, the magician will not show you the secret,” Hammond says. “All you know, for instance, is that a ball starts in the magician’s left hand and ends up in the assistant’s mouth.” We can attempt to understand the magic trick by trying to re-create it at home, which is a simulation of what was observed. If we can reproduce the whole trick, we have discovered what we couldn’t see. In thinking over models and simulations in general, Hammond says, “We’re recreating things in nature that we can’t always see.”

Many models explore fundamental processes. For instance, Hammond says, “Fire is basically the oldest human technology.” Consequently, scientists know that combining gasoline, oxygen, and a spark creates fire. “But even today we don’t have anything to really take the type of snapshot of burning flames that we’d like, to really understand how to, say, distinguish burning gasoline from ethanol or wood from coal,” Hammond says. As a result, simulating combustion remains a high priority, especially given its impact on our energy systems.

Methods of energy storage are common processes to model or simulate. As an example, Hammond mentions IBM’s Battery 500 project, which focuses on creating lithium-air batteries. This project includes experts from IBM as well as scientists from Argonne and the Oak Ridge National Laboratory in Tennessee. Hammond says, “We used two different levels of theory in trying to deeply understand the mechanics of lithiumair batteries.” He adds, “A battery is an incredibly complex system, and people who develop batteries want to know the basic chemistry going on in there.”

The researchers working together on that battery project reflect a trend in today’s models and simulations: it takes a team, usually composed of applied mathematicians, computer scientists, and domain experts, who know the particular processes being studied.

Wibe de Jong, Ph.D., chief scientist at Pacific Northwest National Laboratory in Richland, Washington, manages the ongoing development of NWChem, a software package that he describes as a “computational chemistry tool that can model molecular systems and materials and determine [their] properties.” Many people use this software, which went open source about two years ago, and the users come from academia, industry, and U.S. national labs. Nonetheless, most users need some background in computational chemistry and a little knowledge of quantum mechanics. Still, de Jong points out that some people have developed simpler interfaces for NWChem that allow users to run an experiment on this software without understanding the mechanics behind the modeling. “You can use these interfaces to get an idea if a hypothesis is what’s really happening,” de Jong says, “but to really delve into the details you need to find a computational chemist.”

This software runs on Windows and Mac desktop systems, workstations, and even the largest supercomputers. “The primary target is the large scale,” de Jong says, “because the science that we’re enabling and the people who attack it with our code need large computing capabilities to get their answer fast.”

As an example of this kind of science, de Jong says that NWChem can be used to build models of DNA and then simulate the impact of radiation. “To do this,” he says, “you need to model a large part of the DNA, not just the little piece that gets hit by light.” Hundreds of atoms must be very accurately modeled, perhaps, but tens of thousands of other atoms can be modeled somewhat less accurately. This allows the computation to focus on the key area of interest while simulating the impact on surrounding structures.

Only computation can show the details behind the impact of radiation on DNA. (Image courtesy of Marat Valiev of Pacific Northwest National Laboratory.)Modeling molecules and more

“We have very few ways of probing molecular mechanisms experimentally,” says Rick Stevens, Ph.D., associate lab director of computing, environment, and life sciences at Argonne. “Once we capture a system in a model, though, we can simulate all sorts of what-if experiments.” He adds, “We can get inside the mechanisms at the speed we can come up with the questions, instead of needing an elaborate experimental process.”

The subject of scale in biological research covers a wide range, from atoms to societies, and researchers hope to create an equally wide range of computational models. Stevens says that molecular models—such as molecular dynamics and protein interaction—are pretty advanced. “These problems are routinely simulated,” he says.

Likewise, biologists build models based on an organism’s genome, such as modeling the metabolism of a bacterium. “If you want to use bacteria to make something,” Stevens says, “you can use whole-genome models to design a system and optimize the biochemical network to get the product.”

In biomedical examples, scientists model tissues or even whole organs. For example, a researcher might model the heart or part of the nervous system. “These run on the biggest supercomputers,” Stevens says, “integrating our understanding of various systems.” In a heart model, for instance, researchers must consider mechanical characteristics, electrodynamics, fluid mechanics, and so on. “Then, you can use that model and simulations to study a heart attack or heart disease or to develop artificial valves,” Stevens says.

In biology, an ongoing question involves the importance of folding in proteins. Composed of chains of amino acids, the primary structure of a protein bends back on itself—or folds—making a three-dimensional shape that plays a crucial role in its function.

More than a decade ago, Vijay Pande, Ph.D., professor of chemistry at Stanford University, started a unique method of studying protein structures called Folding@home. This project enlists everyday people to contribute computing cycles from their home computers, and Pande says that the number of people is “almost 10 million since inception, but about half a million at any given time.” Pande and his colleagues combine those computing cycles to perform the calculations that simulate how proteins fold. Just as important, learning why proteins sometimes fold wrong intrigues scientists, because such mishaps contribute to many disorders, including Alzheimer’s and Parkinson’s diseases.

Making so many computers work together, Folding@ home can simulate protein folding over longer time scales than ever before—in fact, thousands or maybe even millions of times longer. After the simulations, Pande and his colleagues try to replicate the findings in experiments to validate the computational results. For example, a protein-folding simulation from Folding@home suggested a new target for treating Alzheimer’s disease, and Pande is working on compounds to attack this target.

Modeling for the masses

Although some chemical and biological modeling requires computational experts and a supercomputer, many models pull in the masses. “The vast majority of the tools are available as programs that run on a laptop or desktop,” Stevens says. “In some cases, the simulation runs through a web browser.”

Likewise, researchers can turn to commercial software, such as SimBiology from MathWorks in Natick, Massachusetts. Asawari Samant, senior application engineer, describes this as “a modeling and simulation platform for analyzing dynamic systems, focusing on pharmacokinetic/pharmacodynamic and systems biology models.” She adds, “The graphical nature of the tools enables scientists without prior programming experience to quickly build and analyze complex models.” These models range from simple bacterialgrowth dynamics to complex signaling pathways.

For example, a pharmaceutical company used SimBiology, along with MATLAB, to reduce drug discovery time by 80 percent. According to Samant, “The company used this software to build detailed computational models of biochemical pathways for a range of diseases, including cancer. Being able to model such pathways enabled researchers to make more accurate and informed decisions throughout the drug-discovery process.”

In the next decade, or maybe sooner, Stevens expects that high school students will experiment with modeling. To get these students modeling, they need easily accessible and inexpensive tools. As an example, Stevens points to the Raspberry Pi—a $25, credit-card-sized computer that plugs into a TV. “Some modeling tools would run on this,” he says.

Those tools will train tomorrow’s scientists, who will use modeling and simulation in ways that we can’t even imagine.

Mike May is a freelance writer and editor living in Texas. You may reach him at mike@techtyper.com.