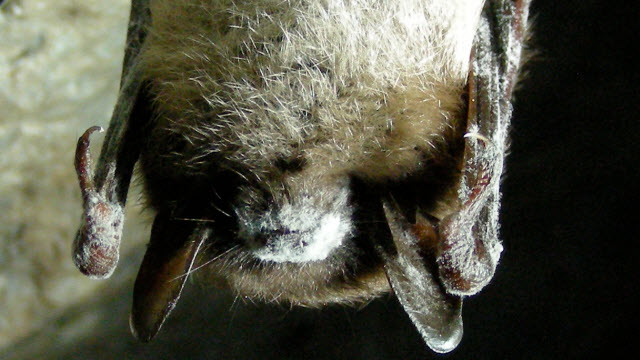 In a recent study in the UK involving wild Daubenton's bats, researchers learned that bats use their sonar not only to track their prey but also to lock in on each other’s positions and avoid crashes, following basic “traffic rules.” According to a National Geographic article on the study, the bats first locate other bats through sonar then fall in with the path of a lead bat or “wingman” to keep from slamming into each other during flight.

Not surprisingly, bats huddle together in the winter during hibernation to stay warm. However, a 2014 paper by researchers from the University of Winnipeg and Nicolaus Copernicus University also discovered that huddling helped bats retain water over the dry winter months.

3. We know the exact color of their ancient ancestors.

Using specialized techniques, researchers were recently able to determine the exact reddish-brown color of two extinct species of bats through fossils estimated to be almost 50 million years old. According to the research team, this was the first time that color of extinct mammals had been revealed.

According to wildlife conservation site Defenders of Wildlife, female bats normally give birth to one pup that can weigh up to a quarter of its mother’s body weight. The site says that would be equivalent to the average human woman giving birth to a 31-pound child. Yikes.

5. There may soon be none left.

White-nose syndrome, a disease identified by the white fungal growth it causes on the snouts and wings of hibernating bats, has wiped out huge numbers of bats in North America. Most recently, the New Brunswick Museum in Canada announced that it will no longer be actively studying the disease in the province of New Brunswick because there aren’t enough bats left. “There are so few individuals left in this stage that it doesn't justify the time involved," Don McAlpine, chair of the department of natural science at the museum, told CBC News.