“Malaria is a disease of poverty.”

That is a sad fact that Peter H. Seeberger discussed on March 10 as part of the Humanity in Science Award symposium at Pittcon 2015 in New Orleans. However, solving that problem by making anti-malarial drugs more affordable is the crux of the work done by Seeberger and his colleague Andreas Seidel-Morgenstern, which involved developing a new process for producing the active pharmaceutical ingredient in anti-malarial drugs and led to the pair winning this year’s award.

The scientists, from the Max-Planck Institutes in Potsdam and Magdeburg, Germany, teamed up on a project that used advanced chromatography methods and flow chemistry to produce the most effective antimalarial drugs today–artemisinin combination therapies (ACTs)–using air, light, and plant waste material. The process used by the two scientists also yields an active pharmaceutical ingredient with an HPLC purity of over 99.5 percent, meeting the standards set by the World Health Organization (WHO) and the U.S. Food and Drug Administration (FDA).

Currently, the cost of anti-malarial drugs is unaffordable for most citizens in West African countries, which are some of the hardest hit by the disease, and it was Seeberger and Seidel-Morgenstern’s goal to bring those costs down.

Another problem that has developed in West Africa is the amount of counterfeit anti-malarial drugs on the market, taking advantage of those desperate for medicine by selling it at a cheaper price than the real drugs. In North America, patients can go to a pharmacy and be assured that what they are buying is a real, safe drug, which isn’t the case in West Africa, Seeberger said.

“The fact is, if you do that in West Africa [go to a pharmacy], the chances that you’ll buy a counterfeit anti-malarial drug are 40 percent and in Asia it’s 56 percent,” Seeberger explained, adding that malaria kills 660,000 people in developing countries each year.

A third key problem making the drug unaffordable is the farming of the sweet wormwood plant (Artemisia), which is the basis of the anti-malarial drug artemisinin. The treatment for malaria using the plant, which Seeberger calls “the only good thing to come out of the war in Vietnam,” has its origins in traditional Chinese medicine. However, the plant has been a boom and bust for farmers, so it is not currently an attractive crop to grow, meaning there isn’t a large supply on the market, which adds to the costs. Researchers at the University of California, Berkeley recently created a partially-synthetic alternative to the plant using engineered yeast products, but there aren’t many other options out there, Seeberger said. However, the work he’s done with Seidel-Morgenstern has made the artemisinin production process more efficient. 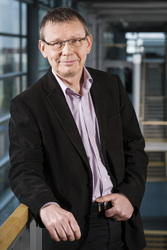 “Because of the work we did, we now have a third line of attack,” he said, adding that the process is not quite comparable to current drug production, but it’s a start. To reduce costs, it uses waste products from farmers and, he says, has a greater application than simply producing artemisinin.

“This is not a one-trick pony,” Seeberger said. “There is an opportunity to make other drugs as well.”

Specifically, the process could also be used in the production of HIV drugs, among others, he added.

According to the Humanity in Science Award literature–put together by award creators Phenomenex and The Analytical Scientist–the scientists’ new drug development process is being put in place at a Vietnam pilot plant in order to allow more developing countries to take part in “the value chain of drug production” and, of course, to produce affordable anti-malarial drugs.