Since recreational marijuana was legalized in Colorado in 2014, the cannabis industry, which got its start when medical marijuana was legalized in 2009, has continued to expand. That means plenty of new and exciting work for cannabis testing labs. However, with regulations and processes still in their infancy, it’s made for some challenges as well. 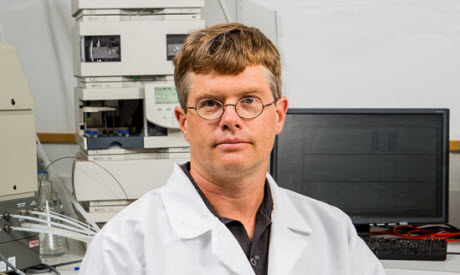 Dr. Noel Palmer, science and laboratory director at PhytaTech.Photo courtesy of PhytaTech“The lack of implementation of the regulations–and the lack of clear guidance impacts us more than anything,” explains Dr. Noel Palmer, science and laboratory director at PhytaTech, a cannabis testing lab in Denver, CO. “It creates a situation in which we are guessing the path going forward, or just not doing some of the work (such as pesticide method development). We are waiting for the state regulators to give us more guidance/comfort to proceed.”

He adds that he understands regulators are in a tough position since QC analytics have never been established for cannabis. “We are paving the first mile of a very long road ahead, and we take this responsibility very seriously.”

Jill Brzezicki, lab director at CMT Laboratories, also in Denver, adds that the most recent issue Colorado labs are facing is the development of an accurate proficiency test to ensure all of the labs are within the same acceptable variability rates.

“We are currently involved in a proficiency testing program being put forward by Emerald Scientific in California and we have also been developing a proficiency test situation between the original four labs that were licensed and certified by the state,” Brzezicki says. “In the latter test, we have been able to achieve less than ten percent variability in our numbers.” 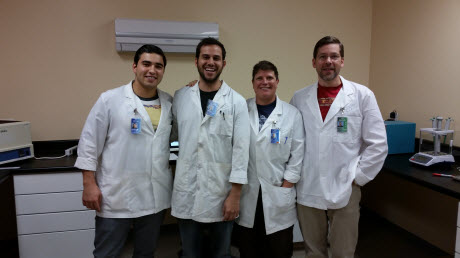 The CMT Laboratories team from left to right: Sean Ege (lab tech), Craig Kovl (lab analyst) Jill Brzezicki (lab director/owner) Michael Glavanovich (senior scientist/owner). Not pictured is Jeannine Machon (business director/owner).Photo credit: Jeannine Machon, CMT LaboratoriesOther recent news in the cannabis testing world has been method development on microbiological testing for E.coli and salmonella as well as three strains of aspergillus mold, she adds. “Pesticides are our next beast to take on and we expect to be up and running with those by the end of the year.”

“It was written into the legislation that way and was not written into the medical legislation,” Brzezicki says of why that is the case. “Medical cannabis was scheduled to come online for mandatory testing in June of 2015 but has been taken out of the sunset bill and is now being looked at as a separate issue. We are hoping this mandatory testing will now come online on or before January 2016.”

For CMT Labs, Brzezicki says the greatest challenge, “is supporting and educating our customers, the industry, and the regulators as to what testing makes sense for the industry and how it's being performed.”

However, Dr. Palmer sees that education aspect as a positive.

“Honestly, the most enjoyable part of testing cannabis products is being involved with the different people in the industry, and the education,” he says. “Being involved in an industry in which there is an abundance of misinformation and unreasonable expectations with analytics, it’s fun to have a good analytical lab, give good analytical data, and help educate people about cannabis with real data. Seeing the creativity of the manufacturers [in the different products they produce] is also fun.” 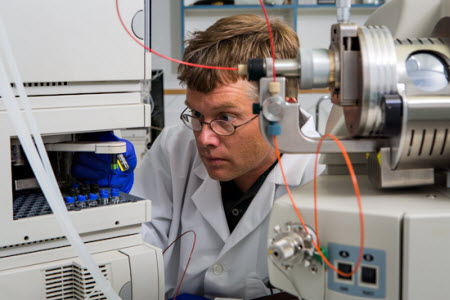 Dr. Palmer uses an HPLC-MS system in the PhytaTech lab.Photo courtesy of PhytaTechHe adds that the strangest cannabis product his lab has ever tested was a suppository, while  Brzezicki lists beef jerky as the oddest item her lab has tested.

“We have tested some pretty amazing matrices, especially from the edibles businesses,” she says. “[In addition to the beef jerky] we've also analyzed salsa, popcorn, soda, hard candy, chocolate, etc. as well as lotions, salves, tinctures, and trans-dermal patches.”

Being a key part of an emerging industry is what Brzezicki enjoys most about her work as well, along with being able to help CMT’s customers produce better, more consistent, and safer products for consumers. In order to do that, the lab uses several key analytical technologies, including HPLC for testing the potency of edibles, flowers, and concentrates and HSGC-FID for the determination of residual solvents in solvent-based concentrate. In addition, CMT uses qPCR for detection of E.coli and salmonella with plating for verification and plating for aspergillus molds, and they have a GC-MS that will be used for pesticide analysis when that comes online.

The future of the industry

With the limited number of labs doing cannabis testing, and further mandatory tests on the horizon, both PhytaTech and CMT are kept quite busy. Luckily, finding the motivation to tackle that workload and do a great job is not hard for either team.

“This is such a new industry, and the science is novel enough that cannabis analytics are self-motivating for the majority of the people in the industry,” Dr. Palmer says. “As a lab team, we remind ourselves every day that we are setting new methods and best practices that will be respected in the expanding market for years to come.”

Though the team at CMT Labs is small, with three owners who work full time and two paid lab technicians, Brzezicki says they handle that large workload mainly through a good attitude. Like PhytaTech, they are also passionate about the work and doing the best job possible.

“Our best motivation is being positive and treating everyone with respect and kindness,” she says. “We strive to achieve the highest level of quality in our testing lab and by treating our employees well, they work well for us in return.”

She adds a recent example of that kind treatment was when the company flew its staff to San Francisco in January to attend the Emerald Conference on cannabis science, where Brzezicki was a panelist.

Moving forward, that motivation will serve those labs well as there is still much work to be done in the industry.

“Here in Colorado, we are pushing heavily for a reference lab and proficiency testing,” Brzezicki says. “I do believe the cannabis testing lab industry will grow across the United States as more states come online with recreational use as well as states that already have medical cannabis.”

Dr. Palmer sees the bigger labs, such as Test America, and universities getting involved in the cannabis testing industry in the future. However, he feels the federal government needs to reclassify cannabis first in order for that to happen. Currently, cannabis is defined by the US Drug Enforcement Agency as a Schedule I drug. While many in the cannabis industry would like cannabis to be declassified altogether in the same way tobacco and alcohol are, PhytaTech hopes first for it to be rescheduled as a Schedule II drug with medical benefits.

“Once they do, which I feel will happen in the not so distant future, there will be an influx of new interest from these types of organizations,” he explains. “Right now, cannabis testing labs are novel because they are the only laboratories that will accept cannabis, hold cannabis, and test cannabis. As a result, there is a bit of a premium that can be charged on our services. Also, if/when cannabis is rescheduled, federal funding should open the door for the profound research needed to evolve our industry into a seriously regulated, public-safety-focused product.”

Transferring Methods from HPLC to UHPLC

Transferring Methods from HPLC to UHPLC