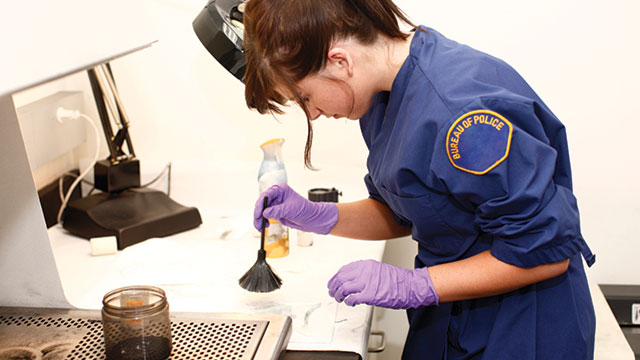 While there’s been a big push recently to draw more women and girls to STEM-related fields, no such push is needed in forensic science, according to the figures. A 2009 article in Forensic Science Policy & Management: An International Journal cites a survey of accredited forensics programs in the U.S. that showed those programs to average 78 percent female students, compared to 35 percent in other scientific fields.

Dr. Teresa Golden, director of the forensic science program at the University of North Texas (UNT), says she’s seen ratios of female to male students even higher in accredited forensic programs, as high as 90:10 when such programs were first starting out in around 2007. The program at UNT has around 70 percent female students.

“It’s actually probably one of the better ratios of some of the programs around the country, because they [forensics programs] do tend to be very heavily populated with female students,” Dr. Golden says.

Related Article: Patent Filings by Women Have Risen the Fastest in Academia

It’s hard to say exactly what is driving so many women to this field, but a big factor appears to be popular TV shows such as CSI, Bones, and NCIS, many of which feature strong female characters. Gavin Russell, a Skype recruiter writing in the Huffington Post about STEM, notes how this “CSI effect” has been a powerful driver for young people to pursue forensics, and “has sparked a disproportionate effect on women, as strong savvy protagonists like Temperance Brennan in Bones encourage female graduates to follow careers in the industry.”

Similarly, a Marshall University study by Catherine G. Rushton, MSFS, and Nega Debela, PhD, exploring why so many female students choose forensics over other STEM fields, said that 30 percent of the forensic science students they surveyed chose the field because of such popular crime dramas.

Dr. Golden agrees that such TV shows, along with their female forensic scientist characters, are a key driver in bringing women to the forensics program at UNT. When interviewing students for the program, she says such shows are one of the two most popular reasons potential students give for why they’re applying to the program. The second reason is the love of solving puzzles.

“A lot of them give that answer, that they like solving puzzles scientifically,” she says. “For some reason that [puzzle-solving] seems to attract the female students.”

She adds that the concreteness of forensics, where students can easily see how it’s applied in the real world, is another draw.

“I think if you’re just, say, a straight chemistry major, sometimes when you go to your classes it’s hard to see how that’s going to apply to things, but when you’re a chemistry major in the forensics program, then you see that your degree is working towards applications for a specific field and they [students] seem to like that a lot.”

Rushton and Debela found the applicability of forensics to people’s daily lives was also appealing to their study participants. In the conclusions of their study, they stated that their respondents liked being able to “do something different every day, something that has a direct application on peoples’ lives, and can bring justice to a victim,” aspects “that are lost in many STEM research laboratories.”

But, while the numbers of women enrolling in forensics programs is high, how many are graduating? When developing the forensics program at UNT, Dr. Golden said she and her colleagues looked at some of the other programs around the US and saw some that, while they had huge enrollments, had a much lower number of graduating students.

In order to avoid that retention issue, Dr. Golden says that applicants to the forensics program have to do an in-person interview with faculty members, who explain exactly what’s involved.

“We decided to bring them in before they joined the program and explain everything; that it’s not like the TV shows,” Dr. Golden says. “We explain what a day is like for forensic scientists, typical salaries, and what they have to do professionally to advance.”

She adds they’ll also discuss students’ goals for after graduation so they can better determine if forensics is the right fit. If it’s not, they’ll suggest other programs that may mesh better with that student’s goals. That interview approach seems to be working.

“We have students who stay through the program so they seem to understand what’s expected of them before they even start,” Dr. Golden says.

While retention has been a much-publicized issue in other STEM fields with many female students leaving their chosen field due to lack of opportunities for advancement, or worse—sexual harassment or being stereotyped or discouraged from pursuing science due to their gender—the responses in Rushton and Debela’s study seem to indicate this isn’t the case in forensics. One participant quoted in the study said that, instead of being dissuaded from pursuing her scientific goals, she “was actually told quite the opposite that [she] should go for a science degree,” and was “taught by a lot of female science teachers.”

The study also found that getting into an accredited forensics programs was the most competitive point in a forensic student’s career, with “little competition after that,” suggesting women are more likely to stay and advance in forensics than in other STEM fields.

Dr. Golden says it will be interesting to see how the numerous female forensics students advance in their careers over the next decade or so, especially in some of the larger forensic employers such as the FBI and DEA.

“It’ll be interesting to see [which graduates] become lab managers, things like that,” she says. “It’ll probably be a decade or so before we start seeing how far up the ranks they’re advancing.”