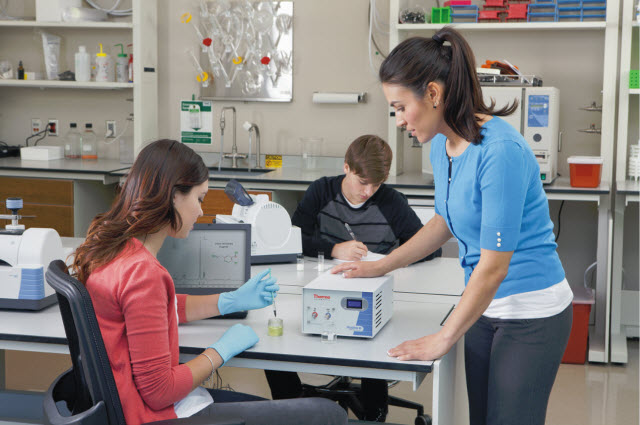 NMR spectrometers were once large, very expensive, and complex instruments but are now being replaced by compact benchtop models such as the Thermo Scientific picoSpin 45, which are cheaper and easier to use. This makes them a good fit for the academic environment.
Image courtesy of Thermo Fisher Scientific

Simon Nunn knows firsthand the impact having access to high-end instruments can have on a science student’s growth.

“I can remember getting my start in spectroscopy and what inspired me was hands-on access to spectrometers,” he said. “I was absolutely amazed that you could understand the molecular structure of a material simply by shining a light at that material and understanding the spectrum that a spectrometer could produce.”

Now 30 years removed from his first experience with spectrometers, Nunn is director of product management for molecular spectroscopy at Thermo Fisher Scientific, highlighting just how important hands-on experience is for students’ future careers.

With recent technological advances making even high-end instruments cheaper and simpler to use, getting that experience has never been easier.

That has changed, with today’s educational instruments more closely mirroring what students will encounter in the real world. A good example, Nunn says, is the Thermo Scientific SPECTRONIC 200 UV-Vis spectrometer. The system is an improvement on an older model called the SPECTRONIC 20, which, while it had a number of benefits, “didn’t look or operate like a contemporary UV-Vis,” Nunn explained. The new 200 model is still small, robust, and affordable for the tight budgets and high usage of undergraduate academic labs, but also operates in the same way a UV-Vis used in the industrial world operates.

Other instruments, other students 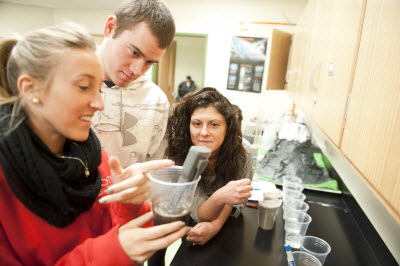 Xylem's YSI EcoSense range of instruments is geared towards the educational market.
Photo courtesy of Xylem

Many other instrument manufacturers are also offering more and more options targeted to the educational market. Xylem’s YSI brand for example, has an EcoSense (Eco as in economical) line of meters and probes specifically for the academic environment.

Theresa McGeady, marketing and communications coordinator at YSI, says such instruments are important for introducing students to the world of water testing.

“Introducing them to water quality parameters in general is really helpful to students,” she says.

The range of pH meters and probes now available to students has also made their field studies much easier.

“If you’re going out into the field, rather than bringing  a big kit with you with a bunch of reagents and pieces, it’s much easier to just stick a probe in the water and take a quick reading,” she explains. “It saves them a lot of time to do it that way. And pH is such a good overall parameter, done with our pH pens, there are so many processes in the environment that are pH-dependent, so you can tell a lot by taking a pH reading.”

And, of course, nothing beats the hands-on experience.

“You can read about things in textbooks but to actually get hands-on experience, I think, is a major part of the learning process,” she adds.

YSI also makes lab instrumentation such as its MultiLab (multi-parameter) and TruLab (pH/ORP/ISE) meters, which are easy to use, making them suited to students in teaching labs, McGeady says. 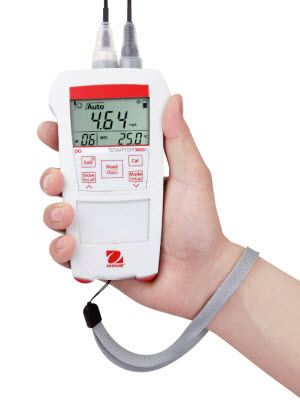 OHAUS recently launched a series of electrochemistry meters equipped with practical features and applications called the “Starter Series.” The company tested the line of instruments at the secondary school level with positive results.
Image courtesy of OHAUS

Some instruments are becoming so accessible that they can be used by even younger students. YSI’s EcoSense® pH10 and pH100, for example, have been used by elementary school students, some as young as the kindergarten level. OHAUS, which recently launched a series of electrochemistry meters equipped with practical features and applications called the “Starter Series,” tested its new line at the secondary school level with positive results. With that success the Starter Series is now being made available to markets outside of secondary schools with a portfolio that has been enhanced to include products and features that are suitable for colleges, universities, and other laboratory applications.

“We actually did a test launch over the past year in vocational/high school markets and the products performed very well,” said Andrew Hurdle, laboratory market manager at OHAUS. “They were also very durable so I know that would be a huge benefit for colleges and universities.”

He added that many electrochemistry meters on the market are for advanced or specialized applications like biotech or pharmaceuticals, rather than the education market. The new Starter Series has a broader focus with simple one-two button functions that are better suited to someone who’s using an electrochemistry meter for a wider array of laboratory applications and doesn't have an extensive amount of training. He says that, because many of the OHAUS meters focus on practical functionality and features that a student would need, they are also more cost-effective than their more specialized counterparts.

“Keeping in-line with our company's slogan, ‘Ingeniously Practical,’ we try to make products that give you what you need to complete daily tasks effectively and not to burden products with specialized features that would drive the cost up to our customers,” Hurdle said.

Even once-complex systems, such as NMR spectrometers, are becoming more accessible, both in terms of cost and ease of use.

“Traditionally NMR spectrometers have been large, very expensive, and complex instruments,” Nunn said. “NMR spectroscopy is certainly taught at the undergraduate level–but for students to get their hands on the instrument–that size, cost, and complexity present a significant educational barrier.”

He adds that, until fairly recently, for students to get an NMR spectrum of a sample, they would have to submit a sample to a central NMR facility within the university which would run the spectrum and give the student the data back, rather than being able to do the work themselves.

“Comparatively recently, there’s been a change in the industry where small, compact, benchtop NMR spectrometers have become available,” he said, adding that the Thermo Scientific picoSpin product line, particularly the picoSpin 45, is one example of such instruments. 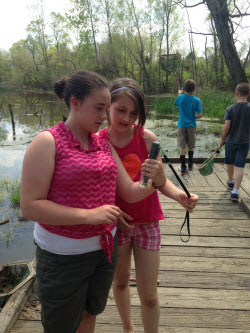 Hands-on experience with real scientific instrumentation at a young age can be a big help in getting students interested in science and going on to pursue it as a career.
Photo courtesy of Xylem

While simplified instruments are having an impact at the beginning of a student’s education, helping get them excited about science in the first place, then introducing undergrads to the techniques they’ll be using in industry, contemporary technology is also helping at the graduate level. For example, in the past, grad students would often spend more time maintaining their instruments than working on their research.

“I remember during my PhD, I spent a good three years nursing a particular instrument and making sure that it was happy every morning that I walked up to it,” Nunn said. “I actually spent more time working to keep the instrument happy than on the science that I was supposed to be investigating with that instrument.”

The latest instruments are now more reliable and much easier to keep in good operating condition, meaning more time for research. And, because instruments are becoming cheaper, it means that not only can more institutions afford them, but more schools can afford multiple instruments. That means fewer lineups of students waiting for their turn at a particular device.

Whether inspiring a kindergartner to become a scientist or helping undergrads gain the critical skills they’ll need for their future careers, Nunn believes hands-on access to instruments is essential to science education.

“It’s like driving car,” he explained. “Understanding the theory and understanding the laws of the road is one thing, but it’s only when you get behind the wheel of a car that you really start to learn how to drive. It’s exactly the same thing with science. The sooner that you can get your hands on real-world instrumentation, the better you are equipped to enter the world of science once you graduate.”

Mental Health of College Students Is Getting Worse

Mental Health of College Students Is Getting Worse

The Role of Academic Core Labs in Life Science Research

The Role of Academic Core Labs in Life Science Research

The Benefits of Cross-Training in the Lab

The Benefits of Cross-Training in the Lab