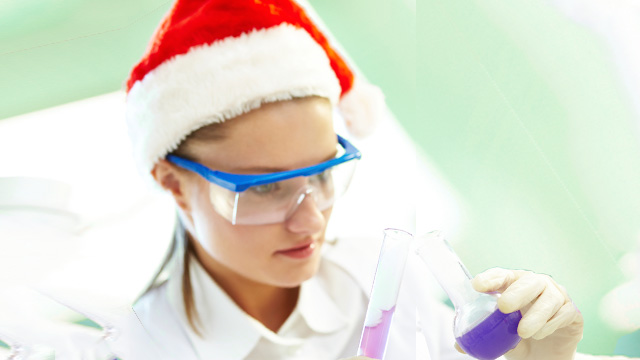 1. Compassion is a big part of Christmas. This time of year, we’re encouraged to take a break from buying gifts our families and friends don’t really need, and donate to those who won’t have a Christmas at all without help, whether it’s giving to the local food bank or donating to a toy drive. Just being nice to others in a small way is also a common theme during the holidays, and recent research from the University of Wisconsin–Madison provides more insight into what motivates people to be altruistic. Their work could help to make societal institutions more just, as well as lead to better methods to cultivate compassion in all aspects of life.

2. Poinsettias are basically the flowers of Christmas. Back in November, University of Florida researchers revealed a new way to help control a dangerous fungus that can cause serious damage to both fruit trees and ornamental plants such as poinsettias. Researchers discovered that certain strains of the fungus– phytophthora–had developed a resistance to a specific fungicide used to control them, but “were controlled by at least another kind of fungicide,” according to one of the researchers. That knowledge means that ornamental plant growers could stop using the ineffective pesticide, thus reducing their costs, and ultimately lowering costs for consumers.

3. Transformers toys are hot items for Christmas gifts this year, but they may have benefits beyond being fun for kids to play with. Dr. Peter Harms, assistant professor of management in the Culverhouse College of Commerce at the University of Alabama, showed in a study to be printed in 2016 that the franchise also helps build important leadership traits in kids. “We were trying to have a little a fun in what is a traditionally very serious discipline,” Harms said in a recent release. “Leaders are important individuals in organizations. Their decisions and the way they treat those around them can make or break the firms and teams they lead.”

4. While not very Christmasy for those who live in warmer climates, snow and ice are a big part of the holiday for many. Surprisingly, the exact process by which ice forms isn’t that well understood. In October of this year, researchers revealed new insights on how ice forms, while debunking the idea that if a particle has a similar surface structure to ice, it acts as a template for ice to form. Their discoveries could lead to safer air travel during the winter, among other possible applications.

5. Sweets are an aspect of the holidays that many parents would probably prefer their children to avoid. But why is it that some children have a bigger sweet tooth than others? Earlier this month, Monell Center researchers took a step towards answering that question when they released the results of a study on sensitivity to sweet taste in school-aged children. They found that some children are 20 times better at detecting sugar than others and that there is a genetic component to how much of a sweet tooth children have. “As sugar becomes more restricted and even regulated in children’s diets, the less sugar-sensitive children may get less of a ‘sweet signal’ and therefore have a harder time dealing with sugar reduction,” said study author Danielle Reed, PhD, in a Monell press release. The research could help improve children’s nutritional health, as well as help create more effective methods of reducing sugar intake.