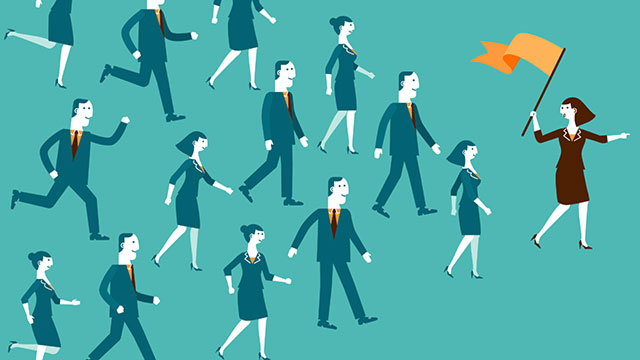 A number of studies have shown that having more gender diversity in companies’ upper management ranks leads to a number of benefits, including more ethical decisions and a better bottom line. However, leadership positions at many companies continue to be dominated by men.

A recent study by Bonnie Marcus, president of coaching and consulting organization Women’s Success Coaching, and Lisa Mainiero, professor of leadership and management at Fairfield University, says that this gender gap is the result of a lack of proper support for women to advance in the workplace, rather than a lack of ambition.

They make the case that women’s ambition begins to fade in the middle of their careers because they don’t have the same support as men to advance to leadership positions. This is shown in a dearth of female mentors, lack of flexible work hours when women start a family, and lower wages and less recognition than men.

We’ve seen this lack of support reflected in our own annual Salary and Employee Satisfaction Survey, where of the readers we surveyed, 68 percent were in a management position of some kind and 45 percent of those respondents were women, while 55 percent were men. While the majority of male respondents made an annual wage between $45,000-95,000, most female respondents made between $35,000 and $75,000 a year. Fewer women were also eligible for benefits programs in their organizations with 48 percent of men eligible for benefits compared to 34 percent of the women we surveyed.

While our survey shows that there is not as much of a lack of female managers in laboratories as there is in some other companies, our results do agree with Marcus and Mainiero’s study in that female managers aren’t supported as well as their male counterparts in terms of benefits and wages.

In their study, Lost Leaders in the Pipeline: Capitalizing on Women’s Ambition to Offset Future Leadership Shortage, Marcus and Mainiero say unequal treatment like this saps women’s ambitions to pursue higher positions in their companies, a key reason for their lack of representation in the upper ranks.

Given the benefits to companies with women on their upper management team, organizations, including laboratories, owe it to themselves to better support women in advancing to leadership positions. And companies need to continue to support women once they achieve those positions—another recent study said that women with greater job authority tend to experience more depression symptoms than men with similar levels of responsibility.

Government policies can also play a key role in narrowing the gender gap, as shown by a University of Texas at Austin study released in August 2015 that concluded that the work-family policies of many Western countries left working mothers “feeling unsupported as both caretakers and workers.”

While the U.S. working mothers in the study felt supported as workers, they didn’t feel looked after as mothers. That study found that women in Sweden, which features “gender equality and labor market policies that grant the same rights and obligations to men and women,” felt the most supported as both workers and mothers.

You can read Marcus and Mainiero’s full study, including their solutions to the leadership gender gap issue, here.