Problem: Basic research and clinical research labs have long relied on real-time PCR (qPCR) for its speed, sensitivity, specificity and ease-of-use. Common applications include gene expression analysis, mutation detection and identification of copy number variation to better understand inherited disorders, cancer and infectious disease. While qPCR is a viable strategy for detection, numerous challenges—ranging from errors associated with using a standard curve to imperfect amplification efficiencies—limit the accuracy of this technique for absolute quantitation. Real-time PCR is unable to reliably distinguish copy number differences below 50 percent.

Solution: Droplet Digital PCR (ddPCR) provides a new approach to target DNA quantification. Bio-Rad Laboratories’ QX100™ Droplet Digital™ is one example of a PCR system that provides an absolute measure of target DNA and RNA molecules offering far greater sensitivity, accuracy and precision than qPCR (see chart). It works like qPCR with one big difference: it first partitions the sample into 20,000 droplets, providing greater precision and resolution for detecting small concentration differences. Due to the digital nature of the assay and the fact that no standard curve is required, ddPCR can discriminate between ± 10 percent differences in target DNA concentration.

The QX100 in particular partitions samples and reagents into 20,000 droplets with target and background DNA randomly distributed among them. This reduces background interference for more reliable and sensitive measurement of low concentrations of nucleic acid that may not have been detectable using qPCR and other technologies.

After PCR amplification occurs, droplets from every sample are streamed in single file on the system’s droplet reader to determine which droplets contain a target and which do not. Using Poisson statistics, the reader calculates the concentration of target DNA from the fraction of positive reactions, providing researchers with an absolute quantification of target DNA.

Many of the studies used liquid biopsy based on ddPCR technology to predict treatment response or track disease progression...

With Bio-Rad's expertise, EMBL aims to expand its training portfolio of innovative methodologies for young scientists 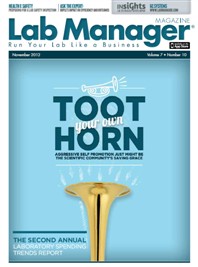 Toot Your Own Horn

Aggressive Self Promotion Just Might Be the Scientific Community's Saving Grace