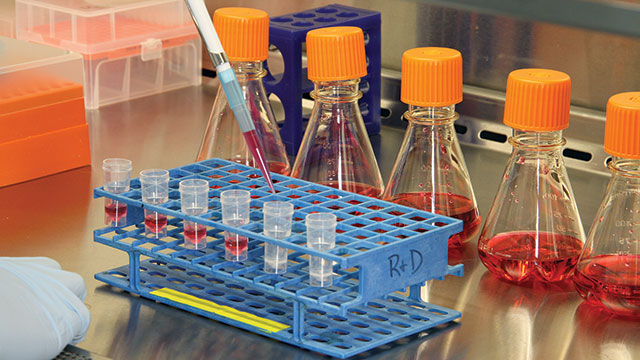 Irvine Scientific offers a range of chemically-defined media including the BalanCD® portfolio for bioproduction and PRIME-XV® cell therapy and immunotherapy applications.

Problem: Experimental variability and the difficulty of reproducing results within and across research groups is a common occurrence observed in cell culture.

While part of this challenge can be attributed to differences in cell models and assay protocols, the use of undefined components, such as serum, is often a major contributing factor.

Classical culture media generally consist of a basal medium supplemented with serum, most commonly of animal origin, such as fetal bovine serum (FBS). Serum is an undefined mixture of proteins, hormones, minerals, growth factors, and lipids, among a host of other components. Its composition is influenced by various factors including the method of blood collection and processing, donor diet, country of origin, and the inherent biological differences between donors. Most animal strains used in research originate from specific and well-characterized genetic backgrounds and are fed specific diets but the lack of a genetically homogeneous population of cows fed consistent diets results in wide variations in bovine serum. With this in mind, serum should be considered a heterogeneous mixture rather than a single reagent; medium preparations containing different serum lots must be considered distinct media.

Further supplementation of serum to a basal medium already containing defined levels of key components may result in concentrations that are detrimental or even cytotoxic to a given cell type of interest. Lots of serum can vary widely in the levels of hormones, lipids, and proteins they contain. Proteins alone can vary between 200–400 factors that regulate cell attachment, growth, and many other cellular functions. A growth factor for one cell type may serve as a differentiation factor for another. Lipids are another important serum component that can see widely varying ranges. They are associated with a host of cellular functions, including signaling and membrane integrity, and can be soluble or associated with proteins, such as serum albumin. This complexity has important implications for cell culture, as each cell type has its own unique requirements—both primary cells and stem cells are particularly affected. In the field of cellular therapy, lack of reproducibility has been considered one of the main hurdles in moving many cancer-treating therapies to the clinic, with programs such as The Reproducibility Initiative being set up and funded just to validate published studies.

In recent years there has been increasing focus on the roles of extracellular vesicles (EVs). Serum is now recognized to also contain high amounts of EVs. These EVs may mediate intercellular signaling, which is important for the growth of human and mouse cells and significantly influences their behavior. Notably, serum derived EVs have been reported to be responsible for masking or misleading results in the EV research field.

Serum variability necessitates the pre-screening of multiple lots to meet the specific requirements of each cell type and application to improve the reliability of assay results, which can be costly and time-consuming. Furthermore, fluctuations in cost and the difficulty of acquiring adequate lot sizes for long-term studies presents an added challenge. Growing industry awareness and concern for animal welfare, as well as the implementation of the 3R rule (reduce, replace, and refine), also contributes to making sourcing high-quality serum an expensive and time-consuming endeavor.

Solution: These factors are driving the need to create more controlled processes through the use of serum-free, chemically-defined (CD) media formulations, where the essential factors are provided individually at precise concentrations. Since introducing the first CD media for bioproduction in the early 90s, Irvine Scientific has been leading the development of defined culture media solutions for bioproduction and cell therapy applications.

For more detailed information and references on this subject, visit https://goo.gl/EoPP5p