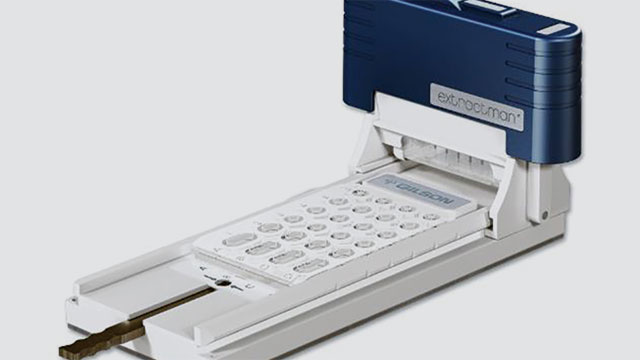 Most proteins work in multi-subunit complexes consisting of proteins or nucleic acids, but studying these interactions can be a challenge when these associations are weak or transient.

The use of paramagnetic beads for affinity purification techniques has made protein isolation faster and simpler. However, protein purification still represents a bottleneck in protein characterization and identification. Paramagnetic bead protocols require multiple, harsh pipette-based wash manipulations that may result in the loss of the weakly-bound or transient protein interactors the researchers are seeking. Paramagnetic bead isolation is also time-consuming. Each target requires separate collection tubes and each experiment may require multiple isolations.

Solution: Recently, Dr. David Beebe, professor of biomedical engineering at the University of Wisconsin- Madison, developed a gentler and faster method using paramagnetic beads known as Exclusion-based Sample Preparation (ESP™) that allows scientists to study weak and transient protein interactions. Rather than wash contaminants from paramagnetic beads, ESP technologies move the beads with their bound analyte from the initial sample solution. This is achieved by either pulling the beads along a surface into the elution buffer or pinning the beads to a surface and transferring the entire surface with the bead attached to the elution buffer. The result is significantly less carryover of unwanted debris or buffer, and is the key in reducing the number of steps.

Gilson is the first to commercialize ESP technology into a research tool, EXTRACTMAN®, which is fast and easy to use. After the target protein or complex is allowed to bind to magnetic beads with an appropriate capture substrate, the sample is loaded onto the EXTRACTMAN plate. Then, an upper magnet within the device lid captures the beads. A second, lower magnet temporarily disengages the upper magnet so that the beads can be moved to a new solution. The simple “capture” and “release” mechanism is repeated in a series of steps, first through wash buffer to remove contaminants, then finally into an elution buffer to release the analyte. The EXTRACTMAN does not destroy the original sample, which makes reprobing for multiple analytes a possibility.

EXTRACTMAN takes advantage of a liquid’s surface tension and hydrophobic surfaces to provide a gentle and fast protein isolation method. Because there are no shearing forces from pipetting or pulling the beads along a surface, the EXTRACTMAN protocol is significantly better at retaining weakly bound protein-protein, protein-RNA, and cell-protein complexes. The rapid nature of the isolation also aids in retaining weakly bound complexes since it reduces the sample’s time spent in wash buffers, which can promote dissociation.

For more information, go to: www.gilson.com/extractmanHIW