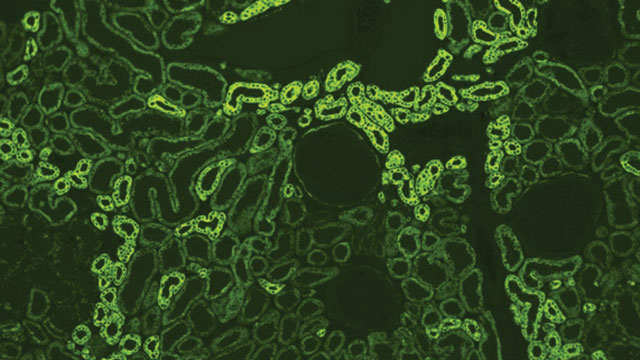 Problem: Immunofluorescence is widely used by today’s biomedical researchers in their analysis of tissue samples. The technique is highly sensitive, enabling better visualization than other methods. But while immunofluorescence provides excellent subcellular visualization of proteins, glycans, and small biological and nonbiological molecules, inherent autofluorescence—the background fluorescence in tissue sections—can complicate the signal. Fluorescent tissue components like red blood cells and collagen make it difficult to discern between relevant and background signals. Formalin fixation, which is often used to preserve tissue samples, introduces a significant amount of fluorescence as well. This is a particular roadblock with formalin-fixed kidney and spleen tissue, which have very high background fluorescence. Fluorescence due to fixation leads to broad emission over a wide spectral range including blue, green, and red emission. This background autofluorescence is particularly problematic when analyzing green- and red-channel fluorophores. Long wavelength (far-red) fluorophores may partially address this problem, but background autofluorescence may still show up in the 600-700 nm range.

Tissue autofluorescence often comes from native components, including flavins, porphyrins, chlorophyll (in plants), collagen, elastin, red blood cells (RBCs), and lipofuscin. These components are generally fluorescent in the green and yellow portions of the visible spectrum, and green-channel fluorophores are the most commonly used. This means that these native tissue components can significantly affect signal to noise when using these fluorophores.

Various treatments including sodium borohydride, Sudan Black, and photobleaching have been shown to be somewhat effective in diminishing tissue autofluorescence, however there are limitations and problems associated with each of these methods.

Solution: A new method—the Vector TrueVIEW Autofluorescence Quenching Kit—enables a straightforward approach and dramatic reduction of autofluorescence. The new protocol involves the treatment of tissue sections with an aqueous solution containing a hydrophilic molecule that binds electrostatically to collagen, elastin, and RBCs. This nonfluorescent, negatively charged molecule also binds effectively to formalin-fixed tissue. Once bound, the TrueVIEW reagent significantly lowers the fluorescence of tissue components through a combination of quenching mechanisms.

The treatment only requires a two-minute step at the end of the immunofluorescence assay, and it is compatible with common fluorophores such as fluorescein, Alexa Fluors, DyLight fluors, cyanine fluors, and green fluorescent protein.

Figure 1. Antigen retrieved human kidney (formalin fixed), probed with anti-AE1/AE3 (green) without (A) and with TrueVIEW treatment (B). Camera exposure time was increased by two times in B to achieve optimal signal to noise. Arrows in A indicate background autofluorescence that is removed in B.The primary concern with any attempt to lower tissue autofluorescence is the effect of the treatment on the desired signal (usually a fluorophore-linked secondary antibody). Ideally, the autofluorescence would be eliminated with no effect on the signal of the fluorescent secondary antibody. With the use of TrueVIEW, there is substantial lowering of background autofluorescence with only a modest loss in the brightness due to the fluorescent secondary. The effect of lowered signal can easily be compensated for by increasing the concentration of the primary antibody or by increasing the camera exposure time when obtaining digital images (Figure 1).

With these considerations, use of the Vector TrueVIEW Quenching reagent leads to a significant enhancement in overall signal to noise in most immunofluorescent assays. This method has broad application for tissue-based immunofluorescence assays and is compatible with standard fluorescence and confocal laser microscopes, enabling the use of formalin-fixed specimens in investigations that were not previously possible.

Glassfrogs Camouflage Themselves by Storing Red Blood Cells in Their Livers

Glassfrogs Camouflage Themselves by Storing Red Blood Cells in Their Livers