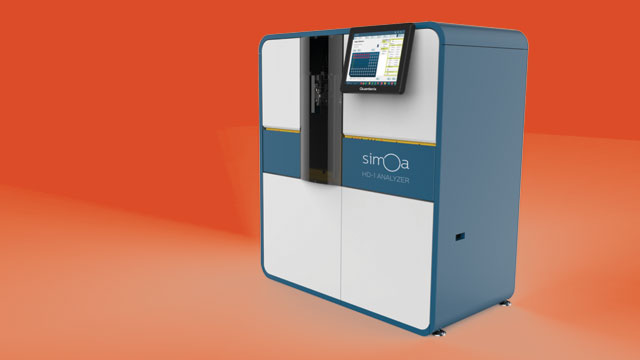 The field of proteomics has been around for decades and relies on targeted antibodies to detect biomarkers in the blood. Traditional ELISA readout systems require large volumes that ultimately dilute reaction product, requiring millions of enzyme labels to generate signals that are detectable utilizing conventional plate readers. Sensitivity is therefore limited and, if biomarkers are detected, it likely means the disease is already active and potentially widespread. For this reason, the clinical use of protein biomarkers to detect and monitor disease progression requires the measurement of extremely low concentrations of proteins in complex samples in order to detect disease in its first stages, improving and accelerating patient care.

Solution: By measuring individual proteins at concentrations 1,000 times lower than the best immunoassays available today, researchers are able to detect, measure and validate new and existing biomarkers at concentrations previously unattainable and much earlier in the disease progression.

In order to achieve this new form of measurement, Quanterix developed a digital platform, called Simoa, to detect individual protein molecules in single molecule arrays. The technology first isolates individual immunocomplexes on paramagnetic beads using standard ELISA reagents. The main difference between Simoa and conventional immunoassays lies in the ability to trap single molecules in femtoliter-sized wells, allowing for a “digital” readout of each individual bead to determine if it is bound to the target analyte.

In contrast to conventional assay reactions, the signal generation volume in a Simoa assay is 2 billion times  smaller, allowing for a single target molecule in a sealed microwell to quickly generate enough  fluorophores to be measured using conventional fluorescence imaging—as opposed to millions of molecules needed for accurate measurement. Quanterix is currently working on several influential studies in fields such as oncology, neurology, and infectious disease detection. A couple of examples where Simoa has proven effective in research include:

Blueprints for a Cheaper Single-Molecule Microscope

Blueprints for a Cheaper Single-Molecule Microscope

A Data-Driven Approach to Lab Sustainability

A Data-Driven Approach to Lab Sustainability