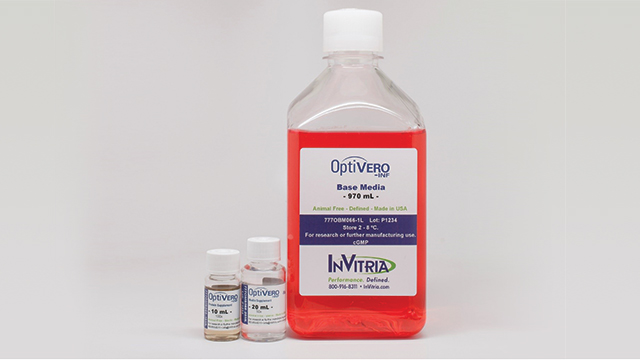 Problem: VERO cells have emerged as a key cell type in the production of many different viruses for both research and vaccine production applications. Fetal bovine serum (FBS) in a basal medium, such as Eagle's Minimum Essential Medium (EMEM) or Dulbecco's Modified Eagle's Medium (DMEM), has traditionally been used to expand VERO cells and propagate viruses. However, the inclusion of FBS can be problematic as it introduces variability, risks for pathogen contamination, and unknown supply reliability. Popular serum-free media for VERO cells, though animal component free, still contain high concentrations of plant hydrolysates. These extremely complex and undefined mixtures, while a major contributor to VERO cell expansion, can complicate manufacturing efforts via the introduction of variable performance, poor reproducibility, and potentially blunted virus production of certain virus types.

In order to successfully progress the numerous vaccines in development today, cell culture media must be designed to consistently deliver optimal performance to propagate the virus of interest. The only way this will be accomplished is through a completely chemically-defined media that will maximize manufacturing yields and avoid any complications that come from unknown components.

Solution: InVitria has leveraged a nonmammalianbased recombinant protein expression system to produce recombinant human serum albumin and transferrin, Cellastim S and Optiferrin respectively, to formulate a virus production media that has complete chemical definition and is free of all blood-derived components. Albumin and transferrin, two of the most prevalent proteins found in serum, play critical roles in many biological processes. Albumin binds and delivers fatty acids, acts as an antioxidant, waste carrier, and free radical scavenger while transferrin regulates iron transport, uptake, and utilization throughout the body. Therefore, it is apparent that, to develop a media formulation without serum, supplementation of these serum proteins becomes the key to success.

Attempts at formulating a serum-free media have been made with the addition of plant-derived di and tri peptides to replace FBS. These hydrolysates are believed to function as a concentrated mixture of balanced nutrients that contribute to the proliferation of cells. However, the unknown compounds present in these mixtures can often interfere with virus productivity, thereby hindering the effectiveness of the cell-based virus production platform.

To circumvent this issue, InVitria’s recombinant proteins can be used as a replacement to plant hydrolysates in serum-free media to provide solely positive contributions to the system. Optiferrin has been confirmed to be both structurally and functionally similar to native versions in its reversible iron binding capability as well as its ability to support cell proliferation, differentiation, and productivity. Similarly, Cellastim S has demonstrated structural equivalence to human serum albumin and shown great performance in many different cell culture systems, all while exhibiting high consistency. Combined, supplementation of both Cellastim S and Optiferrin serves as an ideal replacement to undefined plant hydrolysates to create an optimized virus production media for VERO cells.

In a recent poster presented at the World Vaccine Congress, it was shown that OptiVERO can effectively serve as a replacement to FBS and poorly defined plant hydrolysate-containing serum-free media in influenza, flavivirus, Dengue, and Zika vaccine manufacturing. OptiVERO’s superior virus production capacity offers many manufacturing benefits, including the removal of batch to batch variability, reduction of safety risks, and increased production capacity, ultimately accelerating vaccine development to provide to patients in need.