The availability of helium has become a major issue for scientists. Helium is a non-renewable resource produced through radioactive decay. Because of its non-renewable status, the supply is unable to keep up with the increasing demand. As a result, the price of helium continues to rise, while its availability becomes increasingly unpredictable. The future of helium is uncertain and it’s time for scientists to start considering alternatives. With industry leaders like Parker Hannifin paving the way, hydrogen gas generation is a more accessible option than ever before.

Helium as a carrier for gas for gas chromatography

Helium is an essential component of many laboratory practices. In gas chromatography (GC), helium acts as the carrier gas, transporting the solute down the column to the detector. Helium became the standard carrier gas for GC early on because of its relative abundance, inert properties, purity, and excellent performance. The development of standardized methodologies using helium gas have ensured its continued widespread use. However, with the increasing instability of the helium industry, researchers are looking for reliable alternatives.

Switching to hydrogen as a carrier gas for gas chromatography

Historically, hydrogen has been avoided as a carrier gas because of safety concerns. However, when considering carrier gases, hydrogen is actually superior to helium. Hydrogen is a faster gas, decreasing the amount of time it takes to perform an analysis. Technology like Parker’s PEMPD Series Ultra-Pure Hydrogen Generator can also produce hydrogen with 99.99999+% purity, decreasing the amount of possible contamination during your analyses.

The shortcomings of hydrogen cylinders

Many of the safety concerns about using hydrogen gas originate from the use of gas cylinders to store the hydrogen. These cylinders contain large quantities of flammable gas under high pressure and pose risks to the personnel handling and transporting them. They are also inconvenient, as they have to be changed frequently and monitored regularly. Additionally, the GC instrument must be shut down while tanks are changed, adding to the instrument’s down time.

There are also concerns about purity when using hydrogen cylinders. Contamination can vary from cylinder to cylinder. These small variations can have a big impact on sensitive assays. Contamination can also be derived from the tubing, joints, and elbow seals connecting the cylinder to the GC instrument. Cylinders are typically stored a distance from the instrument, increasing the amount of tubing needed as well as the opportunity for contamination.

Finally, and most importantly, the cost of hydrogen cylinders can be great. Not only are you paying for the cylinder and the gas within, but also for delivery charges, gas management controls, safety equipment, installation, and maintenance. All of these costs add up and take a bite out of your lab’s operating budget.

A solution to the shortcomings of hydrogen cylinders is to replace them with a hydrogen generator. This technology allows for the on-demand production of ultra-pure hydrogen. Using a hydrogen generator eliminates the need to change cylinders or monitor gas levels. It’s also a safer option as gas is generated as it’s needed, meaning there are no stores of flammable hydrogen gas in your lab. As well, personnel do not have to handle heavy tanks full of compressed gas.

Gas generators can also help overcome issues with contamination. Not having to change the cylinders decreases the risk that the system will be exposed to contamination when the tank is disconnected. In addition, the small footprint of gas generators allows you to store them right beside your instruments, decreasing the amount of tubing between the hydrogen source and the instrument and reducing the risk of contamination during gas transport.

Purchasing a gas generator means eliminating the cost of renting a cylinder, the gas within the cylinder, delivery, accessories, safety equipment, installation, and maintenance. More importantly, you will have implemented a reliable solution that will give you peace of mind when performing experiments in the years to come. 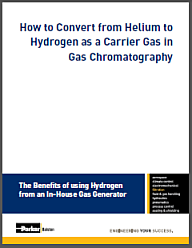 Gas Safety in Your Lab

Gas Safety in Your Lab