As the 69th annual conference of the American Society for Mass Spectrometry (ASMS) quickly approaches, we examine recent key developments and some of the most interesting applications poised to impact the future of mass spectrometry.

Many recent advancements in mass spectrometry (MS) have centered on the study of proteomics. One such example comes from the Max Planck Institute of Biochemistry, where research group leader Jürgen Cox and his team released a new version of the pioneering and widely used MaxQuant software platform for analyzing and interpreting data produced from MS-based proteomics research. MaxQuant 2.0. includes “an improved computational workflow for data-independent acquisition (DIA) proteomics, called MaxDIA,” states a recent press release.

The MaxDIA software enables researchers “to apply algorithms to DDA [data-dependent acquisition] and DIA data in the same way,” according to the institute. The software accomplishes this by combining the use of spectral libraries with machine learning algorithms. By predicting peptide fragmentation and spectral intensities, more precise spectral libraries are created in silico, which can then be applied to the data. Spectral libraries are one of the limiting factors in the application of MS to proteomics, so this innovation is helping to expand the scale and scope of how MS can continue to contribute.

Use of this technology will enable researchers to compare data from DDA and DIA more easily, and harness the power of both techniques to measure and analyze thousands of proteins with greater breadth than before. The Max Planck team is already working on further enhancements for the new software. A paper on MaxDIA was published in July in Nature Biotechnology.

Another technology gaining significant momentum, primarily in industry but also in academic circles, is MS-based multiple attribute monitoring (MAM). The MAM concept was born from the need to monitor protein production and purification, and limit the inherent heterogeneity of biologics, such as therapeutic antibodies, and their impact on quality control. Although MAM is not a new concept, advancements in MS instrumentation and data analysis solutions have made MS-based MAM the preferred platform in biologics drug quality control. Immediate applications include biopharmaceutical discovery and development, although the technique is gaining popularity in research groups studying post-translational modifications and other potential modifications of proteins.

“With ENABLE, we are starting with a successful commercial design capable of conducting diagnostics from atmospheric pressure down to ultra-high vacuum.”

MS instrument providers such as Thermo Fisher Scientific, SCIEX, Waters, and others now offer complete MAM workflows that are built around their MS technology platforms. The solutions are intended to provide comprehensive characterization of proteins and therapeutics by matching reagents and protocols with instrument output and software analysis.

Another new area for MS development centers on the concept of trapped ion mobility MS. The ion mobility mass spectrometry (IM-MS) method combines the separation of ionized molecules based on their mobility in a carrier buffer gas, with the high-accuracy resolving power of mass spectrometry. This enables separation of both mass and size/shape, which provides even greater specificity for analyzing and understanding the complex suite of proteins present in living cells. When combined with chromatography and powerful analytical software, the IM-MS technique offers a multi-dimensional approach toward resolving complex samples such as those in proteomics studies.

Such performance can result in thousands of protein identifications over a short run time using nanogram amounts of material. These technological developments have led to significant gains in sequencing speed without a decrease in sensitivity, ideally suited for complex, high-throughput proteomics.

Significant advancements have been made recently in trapped ion mobility MS. For instance, at the beginning of June, Bruker Daltonics launched new MS technology that combines time-of-flight and trapped ion mobility MS (timsTOF) with liquid chromatography and improved automation software. That combination will allow for big steps forward in the efficiency of epiproteomic and proteomic analyses in labs—along with enabling the rapidly growing field of single-cell proteomics.

An additional advancement impacting both the proteomics and metabolomics spaces is spatially resolved MS. Development of multimodal imaging mass spectrometry is helping researchers reveal more about the workings of biological systems. Yet another area of growth is high-throughput planar solid-phase extraction coupled to high-resolution mass spectrometry, which is helping streamline screening for antibiotics in foods, among other applications.

Researchers have recently been applying established mass spectrometry techniques in many interesting ways. In a study published in the journal Antiquity in August, researchers used accelerator mass spectrometry to analyze 26 human tooth and bone samples from Machu Picchu, Peru, determining that the site is at least two decades older than what textual sources indicate, demonstrating the ability of MS innovations to impact a very wide range of important studies.

In another recent development, MS will have an impact a little farther from Earth in the Southwest Research Institute’s (SwRI’s) Environmental Analysis of the Bounded Lunar Exosphere (ENABLE) project, a three-year $2.18 million program funded by NASA that was announced in July. The program aims to bring mass spectrometry back to the moon, adapting a commercially-available mass spectrometer to identify the composition of the lunar surface. 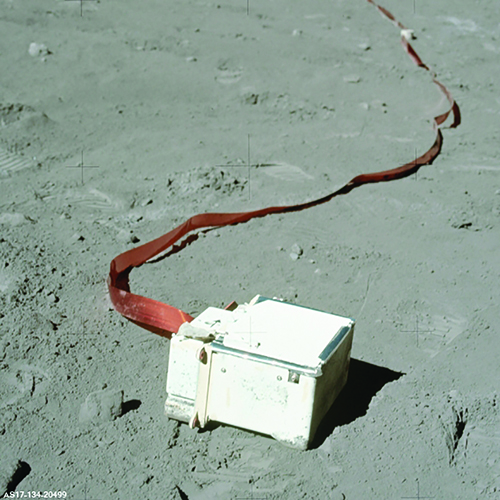 Through the ENABLE project, SwRI is adapting a mass spectrometer to return the technology to useful operations on the lunar surface for the first time in half a century. This image of the Lunar Atmospheric Composition Experiment, deployed by Apollo 17 in 1972, was photographed from the lunar surface by astronaut Harrison Schmitt.
Image Courtesy of NASA/Schmitt/AS17-134-20499

“The last mass spectrometer deployed to the lunar surface was the Lunar Atmospheric Composition Experiment in December 1972 during the Apollo 17 mission,” says SwRI’s Edward Patrick, ENABLE principal investigator, in a press release. “With ENABLE, we are starting with a successful commercial design capable of conducting diagnostics from atmospheric pressure down to ultra-high vacuum.” This work demonstrates continued innovation to adapt existing technology to solve new problems.

MS has also been an important tool in studies of SARS-CoV-2, the virus responsible for the current COVID-19 pandemic. Recently, in three studies explored in a Science research article in August, MS helped reveal how the B.1.427/B.1.429 variant of concern evades the human immune system. Another study published in Sustainability in July shows how MS could be combined with machine learning to provide surveillance of airborne pathogens during the current COVID-19 pandemic and future ones. “Widespread deployment of such an MS-based contagion surveillance could help identify hot zones, create containment perimeters around them, and assist in preventing the endemic-to-pandemic progression of contagious diseases,” the researchers write.

While these studies used more established MS techniques, there are a number of new technologies emerging around MS-based SARS-CoV-2 and virus testing. As reported in December 2020, there are two MS-based SARS-CoV-2 diagnostic tests that have received Emergency Use Authorization from the US Food and Drug Administration. The MassARRAY SARS-CoV-2 Panel commercialized by Agena Bioscience and the SARS-CoV-2 MALDI-TOF Assay from Ethos Laboratories pair RT-PCR with MALDI-TOF MS to detect the COVID-19-causing virus in samples collected at home or at a point-of-care location. Many other MS techniques for virus testing are being developed and used at the research level—certain to be an area of increasing value moving forward.

“MS could be combined with machine learning to provide surveillance of airborne pathogens.”

Three general themes in MS that continue rapid and important ongoing developments and offer promise for the future involve MS imaging, single-cell proteomics, and remote monitoring. Further progress in these areas will continue to bring new insights and technologies into the hands of researchers to benefit the general population. With that thought in mind, we look forward to seeing more of the latest cutting-edge developments impacting the MS industry at the ASMS conference this year.