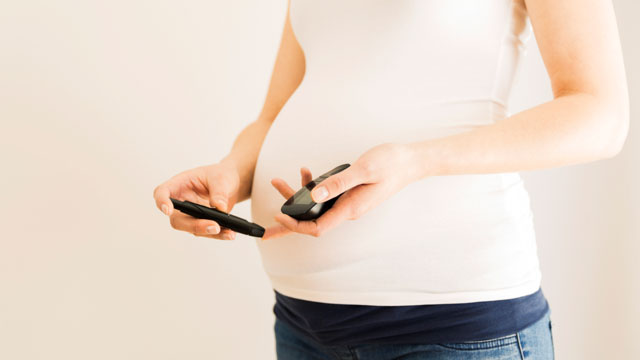 Gestational diabetes is a condition in which women develop diabetes during pregnancy that was not present before gestation. A number of serious complications involving both the mother and the neonate are associated with gestational diabetes; these include an increased risk for premature birth, miscarriage, birth defects, preeclampsia, and neonatal morbidity. Worldwide, one in every seven births is affected by gestational diabetes, as estimated by the International Diabetes Federation. However, a lack of consensus on the diagnostic criterion for gestational diabetes has resulted in disparity over its prevalence rate.

Problem with the current diagnostic criteria

Diagnostic criteria for gestational diabetes rely solely on the blood glucose measurement, which is less than ideal for several reasons. First, although studies have confirmed a clear, graded, and linear association between the blood glucose concentration and adverse pregnancy outcomes, there is no obvious threshold at which point risk is clear enough to demand intervention. Second, high blood glucose is a normal part of pregnancy, during which women develop an increased resistance to the effect of insulin (this ensures the developing fetus gets enough glucose for its energy needs). Most women compensate by making more insulin. Gestational diabetes is currently diagnosed in those women who are unable to increase their insulin production to meet the changing needs, regardless of other variables that could contribute to pregnancy outcomes.

The diagnostic recommendation widely used today was put forward by the International Association of the Diabetes and Pregnancy Study Groups (IADPSG) in 2010, and has since been adopted by several organizations including WHO and American Diabetes Association. It takes a precautionary approach to the diagnosis of gestational diabetes by including mild cases that would not been diagnosed under the previous standard.

The current criterion is the first to account for the neonatal outcomes of pregnancy-related complications. Significant improvement in pregnancy outcomes have directly resulted from its adoption, while at that same time, this new criterion has also resulted in a 45 percent increase in the prevalence of gestational diabetes. This is an unmanageably high number of women who require constant monitoring and treatment measures from a resource-limited healthcare system. A more efficient diagnostic model that takes a combination of variables into consideration, rather than relying solely on blood glucose measures, could better predict adverse pregnancy outcomes.

Problems associated with the current diagnostic criterion for gestational diabetes can be overcome using the tools of personalized medicine. In our current omics era, there is a growing realization that individual differences have a variable impact on our health and disease outcomes. This realization, coupled with the desire to make available treatment options more effective, has paved the way for personalized medicine. Also known as precision medicine, the idea behind it is to take into consideration individual factors—genetics, lifestyle, and the environment—that can impact the clinical trajectory of disease progression when determining strategies for intervention. In diagnosis of conditions such as gestational diabetes where these factors contribute in varying degrees to determine disease outcome, personalized medicine uses them to create subgroups that can be better managed. For medical intervention, although therapeutics are rarely developed to suit individual patients, by defining these subgroups, interventions can be more efficiently targeted.

Categorization of gestational diabetes using personalized medicine is based on the difference in disease outcome when a multitude of variables in addition to blood glucose concentration are assessed. These variables include how presence of comorbidities such as hypertension, obesity, hypothyroidism, and polycystic ovarian syndrome leads to variation in the disease outcome for gestational diabetes. For instance, women who already suffer from hypertension and are then diagnosed with gestational diabetes during pregnancy will have increased risk for complications that are different from those affecting women with only a mild increase in blood glucose measure. This improved categorization leads to screening and treatment options suited to each subgroup.

A personalized approach would also highlight those women who could benefit from early screening for gestational diabetes. In many cases, the fetus already attains abnormal growth by the time of diagnosis at 24-28 weeks of pregnancy. Women with associated comorbidities as well as those who are older than 35, belong to Asian ethnic groups, or have a first degree relative with diabetes should be advised to receive early and regular monitoring.

However, the widespread adoption of personalized medicine should proceed with caution. Care should be taken so that it does not turn into exclusion medicine where specific subgroups of population are neglected while others benefit unequally from research and development. This is already seen in the available treatment options for rare diseases, where the high costs of personalized medicine benefits only a subclass of society.

Megha Kalra is a life science researcher based in Switzerland. She believes that science communication should be an integral part of the work of any scientist who cares about the wider implications of their research.