The U.S. Food and Drug Administration (FDA) describes a lab-developed test (LDT) as an in vitro diagnostic “that is intended for clinical use and designed, manufactured, and used within a single laboratory.” Though it’s straightforward in theory, such a test can be complicated in practice.

“In one sense, the definition of an LDT is very simple,” says Dennis Dietzen, president of the American Association of Clinical Chemistry and medical director of the core laboratory and metabolic genetics laboratory at St. Louis Children’s Hospital. “It is any test that has not gone through the FDA approval process.” But he points out important details regarding LDTs that come into play. For one thing, he says, “LDTs may be minor modifications of FDA-approved assays or they may be incredibly complex systems consisting of a variety of raw materials and instrument systems that have not been previously deployed in a clinical laboratory setting.”

Despite all the ins and outs of LDTs, a few things hold them all together. Any LDT is developed analytically, validated clinically, and monitored in a single laboratory.

The breadth of LDTs explains, in part, the growth of this market. In June 2017, BCC Research’s study on LDTs, “Laboratory-developed Testing: Technologies and Markets,” indicated a world market of about US$9.7 billion in 2015 and an estimated increase to $14.9 billion by 2021. This report indicated that the LDT market is changing because of “a variety of technological, financial, and regulatory factors that will shift the testing mix and drive higher usage of these tests within the wider clinical diagnostics marketplace.”

Overall, LDTs can fill the spaces where FDA-approved assays don’t exist or fail to meet all of the needs of analytical labs. LDTs “may be designed to meet more unique and/or stringent analytical performance specifications, or alternatively, claims that are not otherwise addressed by commercially available kits,” says Jonathan Genzen, clinical chemistry section chief at ARUP Laboratories (Salt Lake City, UT), a national clinical and anatomic pathology reference laboratory. He adds that these tests often embrace emerging technologies and support innovation in healthcare, particularly in areas of unmet need.

A variety of specific features of LDTs also come into play, and one is speed. As medical needs evolve, an LDT can be developed and in use by clinicians long before anything could go through an FDA process. “A good example of this situation is drug screening,” Dietzen says. “New illicit compounds often cut with other harmful compounds consistently surface throughout the country.” In such cases, a lab with mass spectrometry capabilities could develop an LDT to test for the new compounds that could be used in days or weeks. 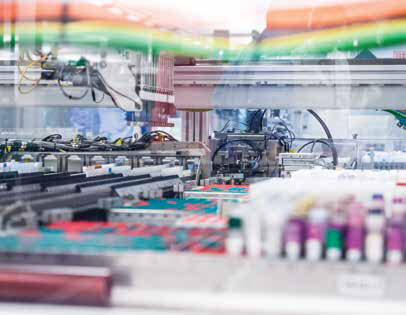 LDTs can also be used as a safety measure of sorts. “FDA approval does not mean that a test is perfect,” Dietzen explains. “Many FDA-approved assays are flawed, and LDTs are an important remedy for these flaws.” As an example, he talks about immunoassays designed to target 25-hydroxyvitamin D. These tests also detect a number of closely related compounds that are biologically different in their actions from 25-hydroxyvitamin D. “Multiple LDTs have been developed in local laboratories to improve the analytic specificity of this particular test,” he says.

LDTs also play an important role in rare disorders and diseases that lack a commercial diagnostic test. In these cases, the financial incentive is not large enough to attract most of the large diagnostic or pharmaceutical companies. Nonetheless, smaller labs might make LDTs for these conditions.

Take, for example, phenylketonuria (PKU). People with this inherited disorder—appearing in one of tens of thousands of births, varying with ethnicity—lack an enzyme that breaks down the amino acid phenylalanine. So, someone with PKU must follow a strict diet. In many countries, newborns get screened for PKU. “The diagnosis and monitoring of phenylketonuria,” Dietzen says, “is exclusively dependent on LDTs in a number of specialized pediatric laboratories.”

As with many aspects of regulations, this part of LDTs can be a little cloudy. Some organizations call an LDT a device, but others call it a service. “This argument has been going on for a few decades,” says James Boiani, a lawyer in the healthcare and life sciences practice at Epstein Becker Green (Washington, DC). “But at this time, if your device/service is an LDT, you would not need to worry about regulation by the FDA—no FDA premarket approval, no FDA requirements on advertising and promotion, no compliance with FDA quality system manufacturing requirements, etc.”

Some of the regulatory actions can depend on how an LDT performs. A safe LDT attracts less attention. “If an LDT poses an imminent and serious risk in [the] FDA’s estimation, it may look for ways to assert jurisdiction or at least influence the use to reduce perceived risks,” Boiani states.

How samples get collected for an LDT might even impact the role of regulators. For example, if an LDT’s collection technology is not FDA-approved, the regulator might use that angle to look into the entire assay. As Boiani explains, the regulator could say the FDA is not regulating the LDT but is regulating the collection device. He adds, “It is something to keep in mind if a lab gets into the business of distributing collection kits.”

Lastly, the FDA is not the only regulator involved with LDT processes. States can develop their own processes for reviewing LDTs. “The Federal Trade Commission, which is interested in protecting consumers and protecting fair competition, can get involved if claims are not adequately substantiated,” Boiani says. Payment issues can pull in other organizations, including the Centers for Medicare and Medicaid Services and state regulators. These are just a few examples of regulators with potential interests in LDTs.

Given such a wide range of potential LDTs, the complexity of making one varies—not surprisingly—considerably. Some can be pretty easy to create, but that’s not the case with most of them.

Despite the differences from FDA-approved assays, LDTs still live in a strict regulatory environment. “When developing an LDT, it is important to understand that you are accepting responsibility for establishing all performance specifications described in regulations promulgated under the Clinical Laboratory Improvement Amendments of 1988 [CLIA],” Genzen explains.

“Many developers of LDTs have also begun embracing more stringent design controls and quality system requirements in anticipation of additional federal—for example, the FDA—oversight in the future.”

Even the existing expectations for an LDT take considerable time and effort to establish and maintain. As Dietzen notes, an LDT maker must evaluate the purity and availability of raw materials needed for the assay. In addition, a lab might need to prepare calibration and quality-control materials, which must be monitored for stability. Any instrumentation that is part of an LDT must be robust and capable of precisely measuring crucial parameters, and the entire process must work as described and over time.

But that’s not all. When creating an LDT, pre-analytic variables affecting test results must also be scrupulously defined, Dietzen says. Plus, any limitations of an LDT must be clearly communicated to physicians. Even the wording in the general description of an LDT matters. For example, what meets the criterion of a “single laboratory”? Does this mean one actual lab space from a physical perspective, or does it mean a lab company, even one with multiple locations? Also, could a lab involve a third party, such as a contract manufacturer? “FDA officials have sometimes taken a very narrow view that the LDT needs to be developed, manufactured, and used in a single brick-and-mortar facility,” Boiani explains. “I don’t think that’s consistent with the historical understanding, however, and that generally a product being developed and used within a single company with CLIA labs arguably meets the definition of an LDT or is close enough that [the] FDA won’t raise an issue.”

Why Make an LDT?

Genzen describes ARUP’s Automated Core Laboratory as a high-volume laboratory, where the first choice of a test is an FDA-cleared or -approved one. “We develop and perform LDTs when there are not commercial assays available or when we can obtain more desirable performance specifications by developing the test ourselves,” he says. As an example, he points out that many mass spectrometry-based LDTs can provide lower limits of quantification than commercially available immunoassays can. Consequently, mass spectrometry is often a preferred method in clinical guidelines. “As a clinical laboratory,” Genzen says, “we want to offer testing consistent with these standards of practice.” He adds, “I’m also involved in evaluating modified FDA-cleared or -approved assays, which is often required for body-fluid testing, when diagnostic companies usually do not validate specimen types other than serum or plasma.”

As these examples show, implementation of LDTs can present unique challenges. As Dietzen says, “These assays are not for the faint of heart.” So LDTs should be considered only when the clinical benefits outweigh the burden of development and maintenance. That is, a lab should consider developing an LDT only if the need is there and the lab personnel can complete the necessary steps in creating, testing, and maintaining an assay. In successful cases, an LDT can change and save lives, but an LDT gone wrong can be misleading and potentially harmful to patients.