Batteries are widely used in our daily lives. One application of battery use that is becoming highly important is in powering electric vehicles to reduce carbon emissions. For instance, General Motors and Audi have announced plans to stop selling petrol- and diesel-powered vehicles between 2033-2035 and are pivoting their businesses toward electric vehicles.

In response to this market trend, there have been immense public and private investments to innovate chemicals and materials to enhance the performance of redox flow batteries—an electrochemical energy storage device that converts chemical energy into electrical energy through reversible oxidation and reduction. The ultimate goal of this research is to create batteries that are cheaper, lighter, and can generate greater power and be discharged and recharged multiple times (i.e. high cycling capacity).

In this article, we will discuss how a redox flow battery works, and recent material innovations to produce redox flow batteries that are more environmentally sustainable and can be fine-tuned to generate greater voltages to meet the increasing energy needs of our society.

How does a redox flow battery work?

A redox flow battery has four basic components: (1) a positive electrode called a cathode; (2) a negative electrode called an anode; (3) an ion selective membrane or separator that prevents contact between the cathode and anode to minimize crossover contamination of active ion species; (4) an electrolyte that enables ions to be mobile. 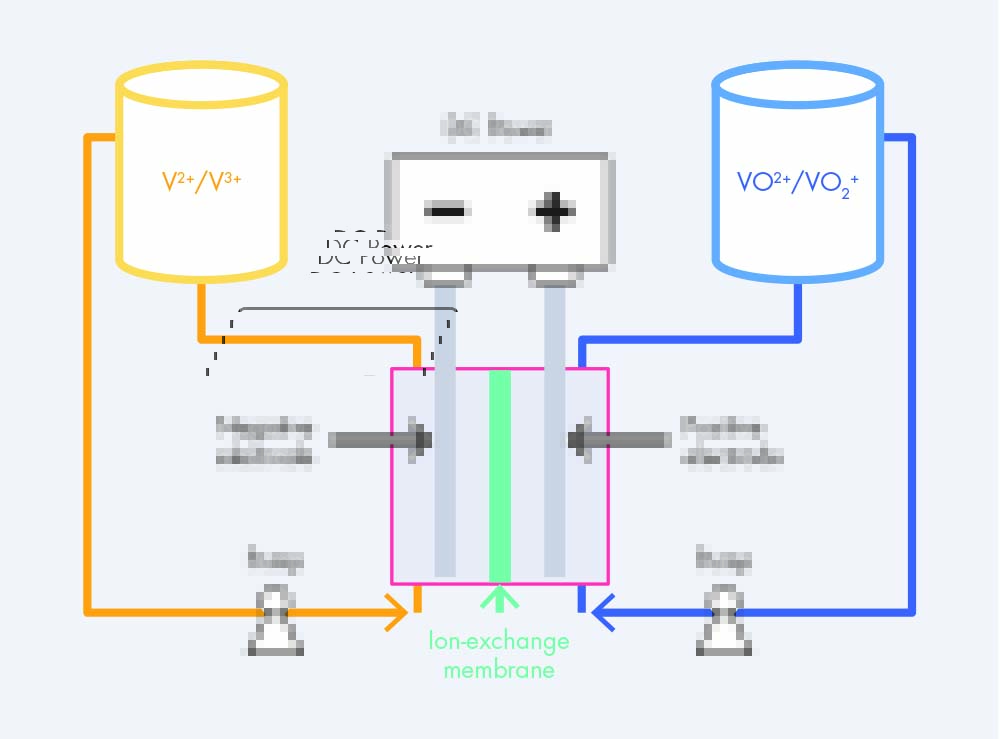 Catholyte is the portion of an electrolyte at the cathode while anolyte is the portion of an electrolyte at the anode, and these electrolytes contain salts, solvents, and additives. The salts allow only the target ions to move while the solvents are organic liquids that are used to dissolve the salts. Additives are added for specific purposes like reducing unwanted side reactions and enhancing thermal stability and ionic conductivity. The electrolyte is an important component of a redox flow battery, as it is designed to allow only the transport of target ions to electrodes and not electrons (minimize unwanted discharge) and it can control the movement speeds of ions (to optimize charging and discharging rates).

Most existing redox flow batteries make use of the transition metal ions, especially vanadium, due to its cheap price. Additionally, the power from vanadium batteries can be scaled up by using larger electrolyte storage tanks. As such, there is no permanent damage to the battery, as it uses the same catholyte and anolyte materials, even if they are accidentally mixed. Increasingly, other transition metal ions, especially lithium, are becoming more popular because lithium-ion-based batteries can be recharged thousands of times while having higher energy density, higher voltage capacity, and lower self-discharge rate.

As an example, this is how a vanadium redox flow battery works. To generate electrical energy during discharge, reduction occurs at the cathode while oxidation happens at the anode. This causes proton (H+) to flow through the ion selective membrane while electron transfer occurs through the external circuit. The voltage that is generated is governed by the Nernst equation, although undesirable side reactions can happen to reduce energy efficiency.

While there are established technologies to make transition metal ion-based batteries, this battery type suffers from major limitations: the transition metals used are scarce and expensive, and mining these metals comes with huge environmental and social costs. Additionally, current methods to recycle and recover these precious metals are still not mature enough to compete cost-effectively with direct metal mining.

A new form of battery

To overcome the limitations of transition metal ion-based batteries, a team led by Yu Zhu at the University of Akron and Wei Wang at the Pacific Northwest National Laboratory created an asymmetric aqueous soluble organic (ASO) active material with an iron (Fe2+/Fe3+) redox center and hydrophilic bipyridine ligand and cyanide group. The advantages of using ASO is that they can be produced in a more environmentally-sustainable manner. Also, by adjusting their molecular structure, their redox potential, which is correlated to the cell voltage, can be controlled.

Although several ASO materials like quinone-based molecules and electrochemically active polymers have been previously created, they generally provide low solubility for active materials, which limit the energy densities. More importantly, there is a lack of suitable, high-performance catholyte materials, as existing aromatic (organic compounds with benzene rings) ASO materials are unstable at high voltages.

The team led by Zhu and Wang decided to create an ASO material with high energy density with minimal crossover and high electrochemical stability. Iron was chosen as it is the most abundant transition metal on Earth. A bipyridine ligand was added to increase electrochemical potential while enlarging the size of the iron-bipyridine complex to mitigate the crossover of active materials.

Two strategies were chosen to attach bipyridine to iron. The first being the addition of hydrophilic bipyridine, which was found to enhance the solubility of the metal complex and redox potential. The second method was a novel way to break the symmetry of the metal complex through the addition of a second ligand, cyanide. Ultraviolet-visible spectra measurements confirmed that asymmetric metal complex designs could significantly boost solubility due to enhanced polarizability and stronger intermolecular interactions with water molecules.

To quantify how the newly created ASO materials fare, the research team measured their electrochemical properties using various voltammetry techniques. The cyclic voltammetry method revealed that by adding ligands to the iron redox center, redox potential can be adjusted and optimized. Next, rotating disk electrode voltammetry was performed to characterize the diffusion coefficient of reactive species, which affects the current density of the battery and voltage efficiency. The newly designed ASO materials with bipyridine and cyanide ligands were found to possess diffusion coefficients (~2 x 10-6 cm2s-1) similar to smaller complexes, suggesting that this method remains suitable to generate a high current density redox flow battery system even in the presence of bulky bipyridine ligands.

Next, the efficiencies of the flow battery were tested using sodium-iron complexes with bipyridine and cyanide ligands (Na4[FeII(Dcbpy)2(CN)2]) as the catholyte and 1,1’-bis(3-sulfonatopropyl)-4,4’-bipyridinium (SPr-Bpy), a common anolyte material. Coulombic efficiencies (indicative of ease of electron transfer) remain at 100 percent at current densities of 20-100 mAcm-2 while there was an overall (not unexpected) 50 percent drop in voltage and energy efficiencies (indicative of energy loss) at high current density. Impressively, even at the 6,000th cycle of charging/discharging at current density of 40 mAcm-2, the energy and voltage efficiencies of the ASO material throughout these cycles were maintained at 75 percent and there was only 0.00158 percent discharge capacity decay per cycle, suggesting battery longevity with stable performance.

To understand why the discharge capacity decay is so low, the team went on to perform nuclear magnetic resonance and found that there was no crossover occurring for their Na4[FeII(Dcbpy)2(CN)2] catholyte but crossover was observed for the anolyte SPr-Bpy. The catholyte material was also stable between pH 3-12 which makes it suitable for use in high energy densities redox flow batteries where highly acidic and basic electrolyte conditions are necessary.

The novel catholyte material suggests that through the strategy of symmetry breaking, solubility of iron complexes with bulky organic ligands can be significantly increased. This opens the door to adopting such a strategy to design a variety of other aqueous organic electrolyte materials with desirable properties. “Our research will benefit the development of aqueous organic redox flow batteries, which have the potential to be the next-generation, large-scale electrochemical energy storage system with the lowest cost,” adds Zhu.