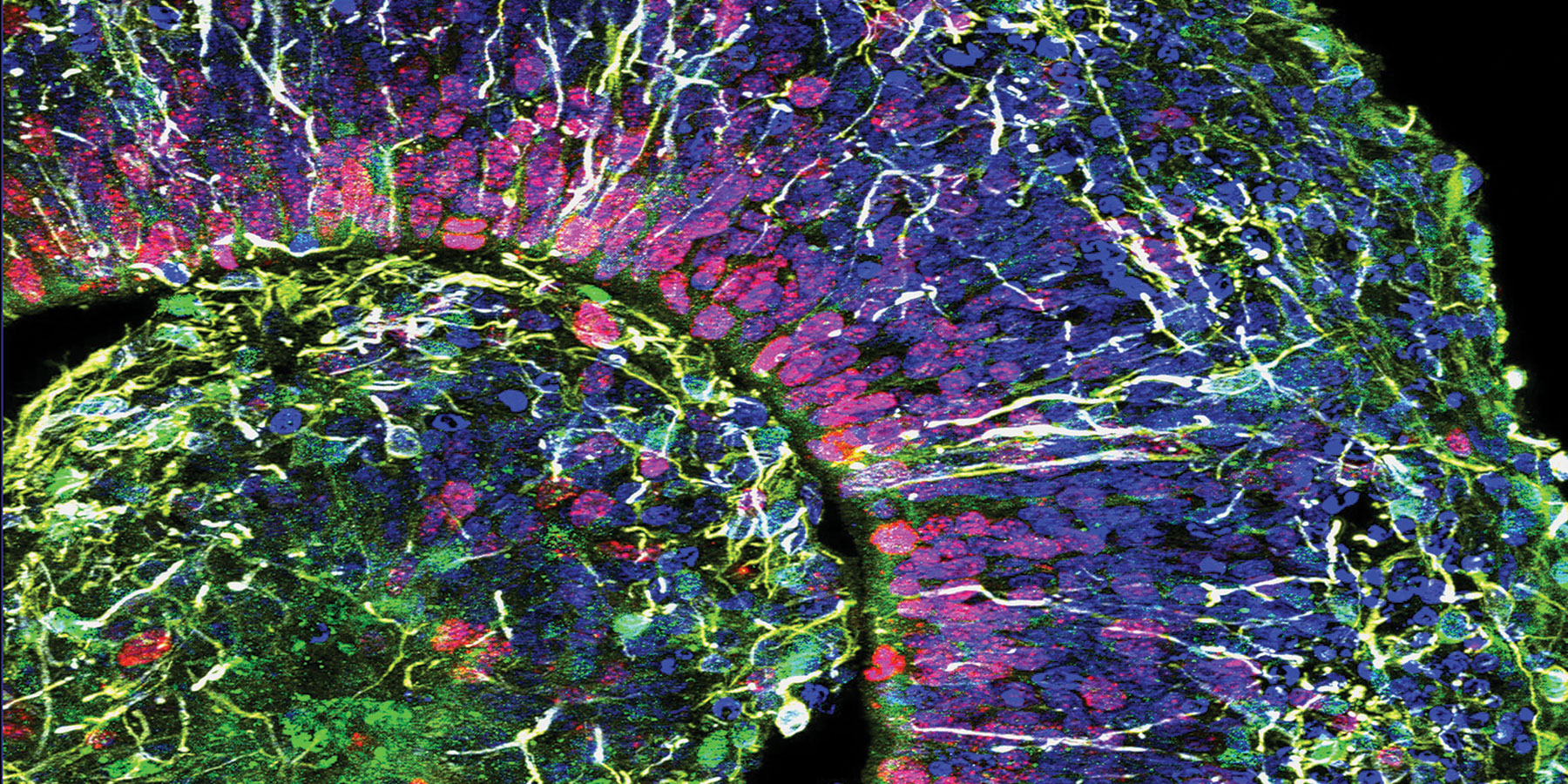 Studying the complexities of the human brain from early brain development to the molecular and cellular mechanisms of disease is no easy task. It is essentially impossible to study the developing fetal brain in utero, and obtaining fetal tissue samples is increasingly difficult. It is also challenging to culture and manipulate healthy or diseased tissue samples to study the molecular mechanisms that underlie neurological disorders, or create animal models that accurately mimic human neurological diseases. While the “mini-brain” or “brain in a dish” is not a fully functional, miniaturized human brain, these three-dimensional cerebral organoids serve as in vitro models to support neuroscience research.

How It’s Made: A Brain in a Dish

“Cerebral organoids are three-dimensional cellular structures, derived from human pluripotent stem cells that self-assemble and organize into brain tissue,” explains Alysson Muotri, PhD, professor at the University of California San Diego School of Medicine. Cerebral organoids are created from human somatic cells, often blood, skin, or dental pulp, that may be reprogrammed into induced pluripotent stem cells (iPSCs) with a variety of reprogramming factors. iPSCs may then be genetically engineered to correct disease-causing mutations, or to introduce mutations to create isogenic cell lines. The iPSCs then aggregate, and neural induction molecules stimulate the formation of neural rosette structures, which self-organize into more complex brain organoids. These structures may resemble specific brain regions, such as forebrain organoids, or resemble several regions of the brain.

It is important to note that brain organoids are not the same as a human brain. According to Muotri, “brain organoids can mimic several aspects of the human developing brain at the molecular, anatomical, and most recently, electrophysiological levels. Still, brain organoids have several intrinsic limitations as a model of the human brain: they are not vascularized, not connected properly with other regions of the body, have limited number and diversity of brain cells, among other differences from the real brain.”

A variety of ethical and legal concerns make it difficult to study brain development, and as a result, many studies rely on animal models despite structural differences between animal and human brains. Brain organoids, however, strongly resemble the early stages of cortical neurogenesis. For example, the generation of an outer subventricular zone that contains a large population of outer radial glia progenitor cells contributes to the size and complexity of the human cortex, and while it is not found in the mouse brain, it has been identified in brain organoid models.

Brain organoids also offer a unique opportunity to model polygenic neurological disorders, such as autism or schizophrenia. Species differences, such as genetics and brain development patterns make it difficult to create animal models that accurately mimic these disorders. Traditional cell culture methods may also be unsuitable, as neurological disorders affect multiple cell types and brain regions. Brain organoids have several key features that make them well-suited for this type of research, including “anatomical organization in three dimensions, diverse cell populations, long-term maintenance, and increased neuronal maturation or electrical activity,” explains Muotri. A variety of techniques have been used to generate human brain organoid models of neurological diseases. iPSCs derived from patients have been used to create organoids for the study of autism, Alzheimer’s disease, dementia, microencephaly, and schizophrenia. The introduction of drugs or viruses during organoid formation has also been used to create models of neurological disease.

Brain organoids enabled Muotri and his colleagues to demonstrate causation between the Zika virus and birth defects. The Zika virus began to infect humans in 2007, when it was vectored by the Aedes aegypti mosquito and caused an epidemic in Micronesia. By 2013, the Asian lineage of the virus caused outbreaks in New Caledonia and French Polynesia, and reached Brazil, where it was linked to congenital malformations such as microencephaly and neurological diseases. “Initially, there was no causative agent for the microcephalic outbreak in Brazil,” explains Muotri. “There was a clinical correlation with Zika virus, but other environmental agents were also plausible.”

The team set out to determine the causal relationship between the virus and birth defects by infecting SJL pregnant mice with the Brazilian Zika virus (ZIKVBR) isolated from a patient. The pups born from the infected mice presented with congenital malformations, similar to what was occurring among human newborns. Using quantitative polymerase chain reaction (qPCR), the team confirmed the presence of ZIKVBR genomic RNA in several tissues from the affected mouse pups, with very high amounts present in the brain. This confirmed that the virus preferentially attacked the nervous system.

Mouse brain neurodevelopment is rapid, and posed some challenges for Muotri and his team. “Initial experiments in mice had failed to reveal this phenotype because of the rapid timing of neurodevelopment,” explains Muotri. “While you can have a fully developed mouse brain in about 20 days, the human brain requires nine months.” Therefore, a higher dose of the virus was required to observe an effect in mice, much higher than what would be delivered via mosquito bite.

The team also used brain organoids to study the virus in the context of slower human neural development. “To prove causation, we exposed the Zika virus to a human brain organoid and could immediately notice that the virus was killing the neural progenitor cells and reducing cortical thickness. This is exactly what was happening in the human newborn brains,” says Muotri. “The slow progression of human neural development was essential for us to prove causation between the Zika virus and birth defects.”

Until recently, insight into human brain functional development has been limited by the inability to study the electrophysiology of embryonic brains, and as such, is based on non-human models. While structural changes occurring during early brain development are guided by genetic programs, it is unknown whether functional networks also follow fixed developmental programs. Using brain organoids, Muotri and his colleagues found a new way to study network activity in the developing human brain.

In a recent study, the team developed human cortical organoids that demonstrated spontaneous network formation. “Until this publication, nobody could detect functional networks in human brain organoids, because the neurons were too immature to spontaneously fire and connect. Even after several months, the neurons still wouldn’t form networks,” explains Muotri. “We postulated that the protocols needed to be optimized to favor neuronal firing.”

“We showed that using a novel protocol, brain organoids can generate functional networks that increase in sophistication and complexity over time. We could even detect neural oscillatory waves, similar to what is recorded in EEGs (electroencephalograms),” he explains. Essentially, Muotri and his team detected brain waves in a dish. Even more incredible is the pattern of oscillations they observed: “Perhaps more exciting is that these neural oscillations follow similar patterns as observed in the brains of premature infants,” says Muotri.

Their findings support the hypothesis that structured network activity in the human neocortex follows stable genetic programming, similar to structural development. They may also set the stage for significant research into the developing human brain.

There are undoubtedly some ethical considerations associated with the use of brain organoids in research. “With the emergence of spontaneous brain activity in these organoids, the major ethical concern is if they acquire traces of consciousness or self-awareness,” says Muotri. “Right now, this seems unlikely, but this field is moving fast, so it is a possibility. In this case, one has to agree on a ‘moral status’ of these organoids, creating some kind of protocol for their use in research.”

It has been suggested that sensory input and motor input are necessary for cognition, and that brain organoids lacking sensory tissue will not have self-consciousness, phenomenal consciousness, or access consciousness without subjective experience. However, as Muotri has said, future culture conditions may enable in vitro organoids to develop consciousness and this will pose significant ethical challenges surrounding their use in research.