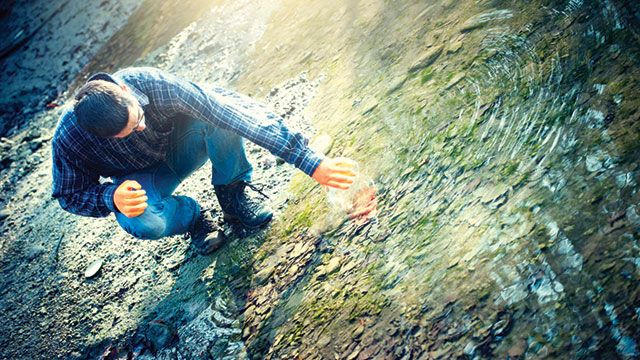 On-site environmental testing employs instruments, sample collection, and preparation with the goal of reducing the sample burden on the home laboratory. Field instruments must be rugged and record results automatically, preferably to a central repository through a wireless service. Devices must operate for an appropriate period of time without charging or being attached to cumbersome power supplies. Above all, field instruments should serve their purpose, which is to perform serious work and produce actionable results on-site, usually in real time.

NIR is an ideal mode for ultraminiaturization. NIR analyzers interrogate analytes with broad-spectrum IR light, which is absorbed, transmitted, reflected, or scattered. The microPHAZIR works by measuring the light intensity before and after the interaction, and within seconds calculates the diffuse reflectance—a combination of scattering and absorbance. The technique is nondestructive and non-contact, so potentially hazardous samples require no manipulation or preparation.

NIR bands tend to be broad, resulting in spectra that are more complex than, say, FTIR. Careful instrument calibration is essential. On the plus side, NIR penetrates much further into samples and, unlike Raman, is unaffected by fluorescence. Denzil Vaughn, PhD, Thermo Fisher Scientific’s director of marketing for portable analytical instruments, notes that “asbestos supplies a characteristic band in the NIR.”

Other companies have been active in NIR field instrumentation. ASD (Boulder, CO) markets a broad-spectrum handheld analyzer that operates in the visible and NIR spectra and includes a global positioning system and voice data recorder. In the Brimrose (Sparks, MD) analyzer, dedicated to wine and grape analysis, the handheld probe is connected to a small, enclosed spectrometer box. The FT-750 handheld by Felix Instruments (Camas, WA) measures key quality attributes, including those related to harvest of fruit. Metrohm’s (Herisau, Switzerland) NIRS XDS operates as a compact stationary field monitor for harsh environments like those in oil and gas processing. The company has similarly configured detection systems for quantifying process parameters in the “field” of pharmaceutical manufacturing facilities. 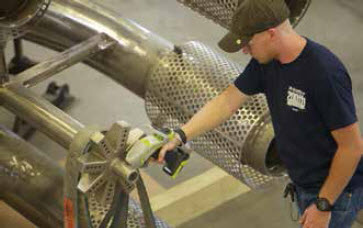 The Thermo Scientific Niton XL5 analyzer is designed to rapidly and accurately assess the chemical composition of metals in the fabrication, positive material identification, and scrap metal industries.Credit: Thermo Fisher Scientific.XRF is a nondestructive method for measuring the presence or concentrations of elements that absorb at one X-ray wavelength and emit at another characteristic wavelength. Since each fluorescing species emits at a (more or less) unique wavelength, it is possible to identify multiple target analytes simultaneously.

The suitability of XRF or NIR depends on the target analyte. “Some materials absorb at NIR frequencies, while others fluoresce,” Vaughn says. Nevertheless, the majority of Thermo Fisher’s portable field analyzers use XRF, which can probe samples for ppm element levels. “XRF provides actual metal composition values, where NIR and Raman probe molecular characteristics. Since XRF is so sensitive, it can detect the proverbial needle in a haystack.”

It also assists in making actionable determinations at the point of analysis, eliminating the need in some cases to bring samples back to the lab. If a regulation specifies dangerous concentrations in parts per thousand and field analysts can reliably reach ppm levels, the field measurement stands on its own.

Sampling practices for water testing are illustrative. Water weighs about eight pounds per gallon, so transporting large volumes from a test site to the lab is costly and cumbersome. Analysts must ensure that samples do not change during transport, either because of chemical effects or bacterial growth. Temperature control is an issue, and collection/storage vessels, which are commonly made of glass, can break.

A significant trend in water testing has been adoption of onsite extraction to reduce sample volumes. “There are many advantages to getting rid of the water at the point of collection and bringing back samples in an extraction device,” says Bob Johnson, CEO at Horizon Technology (Salem, NH).

Europe has been ahead of the U.S. in several areas of on-site environmental testing, particularly for sample preparation. “U.S. regulations are moving extremely slowly toward that point,” says Horizon marketing manager Zoe Grosser, PhD.

Horizon has done a good deal of work with European companies, particularly the European Commission’s Joint Research Center. Horizon created a new device based on a sealed disk holder and the company’s SPE membranes. One European customer has since developed their own battery-powered, field portable device that extracts chemicals from a specified water sample volume, which allows returning only the SPE disks to the lab for analysis.

One significant advantage of quantifying analytes immobilized through SPE is that the sample is “frozen” in time at the collection point. Ibuprofen, for example, a common over-the-counter drug found in wastewater, degrades during transportation in solution but not when bound to SPE disks.

On-site sample preparation enhances the reach of portable labs as well. Numerous mobile labs sponsored by the U.S. Environmental Protection Agency can now collect and extract samples and, depending on their capabilities, analyze them on-site or screen them for subsequent analysis at the home lab. 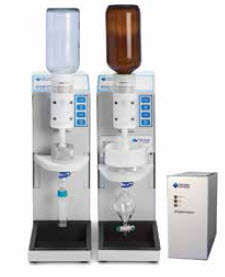 Horizon Technology SPE-DEX 4790 for laboratory extraction of field-collected water samples on solid phase extraction (SPE) disks.Grosser admits that advances in portable and handheld analyzers have eliminated sample preparation for many samples, but not for water. “You can analyze volatiles without sample prep through portable GC, but with actual water samples, that’s not possible.” Contaminant concentrations are too low for direct injection into chromatography systems, so compounds must be concentrated at least to the point of being detectable by mass spectrometry. “Water is a difficult matrix.”

In describing the validity of field versus laboratory testing, Bill Hahn, senior product specialist for GC-MS at PerkinElmer (Waltham, MA), quotes Massachusetts DEP official John Fitzgerald: Lab data is not always as good as you think it is, and field data is not as bad as you think. Fitzgerald’s statement is cause to evaluate why, where, and how field data are appropriate and their value to on-site monitoring or remediation projects.

Through its 2015 acquisition of Torion Technologies, PerkinElmer gained access to Torion’s portable GC-MS instruments. Torion touts its T-9 GC/MS as “the world’s smallest person-portable GC/MS.” The entirely self-contained device weighs 32 pounds and operates for several hours on a rechargeable battery. With a mass range of 41 to 500 Da, the device targets volatile and nonvolatile contaminants likely to exist at current or former oil and gas drilling sites. Additional applications include explosives, chemical warfare agents, and contaminants relevant to food and industrial settings. Sample preparation, for which Torion sells branded products, is done through solid-phase microextraction or needle trap.

Like most field instruments, the Torion’s strength lies in screening samples, not confirmative analysis. “Yes, it’s screening, but it’s still GC-MS, and it’s ten times faster than benchtop systems,” Hahn says. Where FID or PID detector data is relatively easy to defeat in court, MS data holds up better. “We’re not professing to do established EPA methods or any EPA protocols with strict QC requirements. We don’t even use the same sample introduction techniques. However, even EPA is allowing for more performance-based methods like ours.”

Portable GC-MS is growing as EPA recategorizes Superfund sites and adopts lower limits for contaminant concentrations. Inficon (Syracuse, NY) also sells a similarly enabled portable GC-MS unit, the HAPSITE ER, which features headspace analysis and SPME/thermal desorption sample prep. The difference, Hahn says, is that HAPSITE uses a conventional GC oven, while Torion employs a low-thermal-mass column that reduces weight and lowers column heating time to seconds. In this design, the “oven” is the column itself, with a builtin heating element. The toroidal ion trap MS captures ions as efficiently as a laboratory system but with just 1 percent of the vacuum requirement. Taken together, these innovations translate into low power consumption.

While the majority of field environmental assays are based on wet or instrumental chemical analysis, pathogen monitoring usually requires an entirely different set of capabilities. When the U.S. Department of Homeland Security created its BioWatch program in 2001 (current budget: $3 billion), the goal was to monitor air in large metropolitan areas for common bioterror agents. The program currently protects more than 50 percent of the U.S. population.

M-BAND, a system developed by PositiveID (Delray Beach, FL), is a transportable PCR lab that samples, amplifies, monitors, and reports suspicious airborne contaminants. The refrigerator-sized devices, sophisticated as they may be in terms of automation of complex assays and networked communications, cannot be considered truly portable instruments.

PositiveID’s Firefly Dx instrument contains the detection and assay capabilities of its much larger cousin in a handheld package. The battery-powered system, currently under development and testing, performs up to 15 test cycles, depending on sample and target, and up to four simultaneous tests per sample. Assays are based on multiplexed TaqMan RT-PCR chemistry. Results are available in 15 to 30 minutes.

“Rather than taking samples back to the lab for PCR analysis, you can have actionable results at the sampling point with Firefly Dx,” says Kimothy L. Smith, DVM, PhD, chief technology adviser to PositiveID.

Firefly Dx provides results in the method the Centers for Disease Control and Prevention considers the gold standard for pathogen analysis, according to Smith. “There’s no need for laboratory confirmation, since you’re already using a gold standard test. The results could be admissible in court.”

How far can miniaturization go? In the coming years, end users should keep an eye on the development of chip-sized components and how they may be combined for true handheld analysis outside traditional spectroscopic methods.

The “lab on a chip” idea has been around since the early 1990s, and it has been designed into various single-use laboratory analytical products. Agilent Technologies produces a chip-sized LC front end for MS analyzers, and in 2015, a Virginia Tech team headed by Muhammad Akbar reported a microfabricated GC. Numerous academic groups are working on chip-based MS as well.

Questions regarding interoperability, cost (particularly for single versus multiple use), and advantages over more conventional instruments still need answering. Yet while no one will call a handheld “everything” field environmental laboratory a concrete goal, that is where the industry is heading.