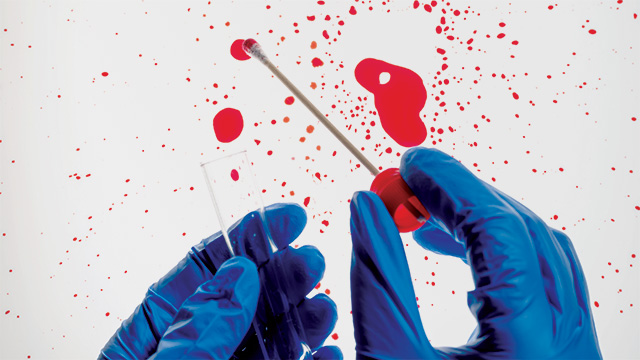 Scientists may argue whether genes or proteins are more physically robust under specific circumstances, but a consensus is forming in favor of proteins in many forensics settings. “Emerging next-generation proteomics provides much more detailed information than genomics about the evidence in question,” says Oscar G. Cabrices, PhD, staff scientist at SCIEX (Redwood Shores, CA).

“Mass spectrometry of proteins can provide associative paths between body fluids and actions, times, and sample transfer paths within collected evidence.” Instead of simple yes/no answers (e.g., whether a gene for a particular organism is present), proteomic analyses become more molecularly specific and more amenable to comparative associations, and provide a sounder scientific basis for drawing conclusions.

However, proteomics is not without its issues. The two knocks on proteomics compared with genetic analysis are the lack of a process for protein amplification analogous to polymerase chain reaction (PCR) and the high cost and operational complexity of proteomics.

True, PCR can amplify genes from samples too small to analyze directly. That very amplification power, however, is prone to interference, particularly when a sample touches several individuals or other organisms. PCR also requires that one know what to look for.

Cabrices notes another limitation of genetic analysis: “Single DNA analysis cannot indicate which fluid the genetic material originated from. Identifying which fluid or fluids are present in an evidence sample can be instrumental in determining events of a suspected crime.” DNA analysis is typically performed through capillary electrophoresis (CE) with spectroscopic detection. “As far as other separation techniques are concerned, LC [liquid chromatography] and CE are complementary, but their hyphenation to mass spectrometry [MS] for forensic protein analysis increases the potential to deliver much more conclusive information,” he adds.

Vendors often bundle instrumentation into systems around specific workflows such as analysis of environmental pathogens or pathology samples. Routine forensic proteomics would include an LC-MS/MS system with automated sample preparation capabilities for enhanced sample chain of custody; a discovery research system might be built around a quadrupole time-of-flight mass spectrometer.

“Forensic proteomics is quickly growing, and we are working with top researchers in the area to innovate the base technology,” Cabrices says. “But we’d like to see how the routine forensic scientists embrace next-gen serology, with the vision of evolving their routine approaches to plug-and-play, MS-based analysis methods.” In other words, it is too early to consider proteomics workstations built around forensics.

In 2012, a group at John Jay College of Criminal Justice in New York published a paper describing a shotgun proteomics approach to analyzing the immune response of a 500-year-old Incan mummy. Lead author Angelique Corthals reported that a lung swab from the deceased harbored the remnants of Mycobacterium, a pathogenic pulmonary agent that could cause death.

Conventional analysis, including PCR (how the bacteria were detected in this case), does not answer definitively. This individual may have died from pulmonary infection, or been sick from it but died from some other cause, or not been sick at all when he died. Luckily, Corthals had another, similarly preserved mummy from the period who did not harbor Mycobacterium. Using mass spectrometry, specifically a Thermo LTQ-Orbitrap XL instrument, investigators compared immune system proteins from the putatively healthy and infected decedents. They also examined blood samples from the mouth of the mummy harboring the bacterium.

The proteins analyzed from this individual indicated that he did not suffer from an active infection, and that the blood in his mouth resulted from trauma—which may have been the cause of death.

Corthals wrote that conventional methods of characterizing immune reactions to pathogens, such as antibody- binding immunoassays, “require fresh tissues, use a small number of targeted antibodies, and are prone to both false positives and false negatives.” Proteomics identifies and quantifies proteins directly. Proteins outlast DNA by some accounts, do not require amplification, and represent a wider swath of physiology.

Corthals’ study leaned on earlier work on DNA fingerprinting and later attempts to apply the young science of proteomics to pathogen detection. She took this idea to the next level, toward the study of physiologic events concurrent with infection.

And perhaps without realizing it, in this one paper Corthals both demonstrated and laid the philosophic foundation for forensic proteomics.

Blood detection and characterization are normally conducted through optical, spectroscopic, and chemical methods. Optical techniques are the least destructive, but spectroscopy (e.g., short ultraviolet) sometimes degrades DNA. Chemical analysis always alters/destroys the sample, often involves sample preparation, and may be incompatible with the circumstances or environment in which the sample exists. None of these test categories is particularly helpful in distinguishing between human and animal blood.

Analytical chemists employ MALDI, a “soft” MS ionization technique, on proteins and other biomolecules that do not survive hard ionization methods. MALDI is also attractive in forensics for its avoidance, in many cases, of lengthy sample preparation.

Francese combines MALDI with ion mobility MS, which separates isobaric ions based on their “drift time,” thus adding robustness and reliability to molecule identification. MALDI-MSI allows the imaging of complex biologic details of intact tissue—in this case, the distribution of chemicals within the fingermarks—without the use of antibodies or radioactive labels. The technique instead employs trypsin digestion of the sample in situ followed by MS visualization of defined regions within the mark.

In the non-proteomics study of stains made from horse and cow blood, MALDI-MSI detected heme molecules from both samples and distinguished hemoglobin from the two species. Then, using proteomics, the group was able to distinguish horse from human hemoglobin using multiple blood signatures.

“Crime scene and crime lab methods are presumptive because the tests are not overly specific for blood,” Francese explains. “For example, egg yolk reacts to a certain blood reagent exactly like blood does, and that would be a false positive.”

An example of confirmatory tests are immunogenic tests, which are expensive and destructive, or the MS method described above. In some cases, MALDI is superior; for example, in identifying false positives from the reagent-based tests.

NOT DODGING THE BULLET

Investigating a crime or law enforcement scene where multiple shots have been fired entails assembling visual and physical evidence into a credible narrative. Analysis of DNA remaining on bullets can help identify which bullet struck which participant, but it provides little or no information about which round caused specific tissue damage. Moreover, genetic material degrades rapidly. Connecting a bullet to a specific organ is essential for determining which round caused injury or death, a fact on which criminal prosecution (or defense) may rest.

Dr. Sascha Dammeier and his coworkers at the University of Tübingen (Germany) have reported on a method that uses mass spectrometry to generate organ-specific protein expression profiles that could help determine a bullet’s path through a human body. The method involves digesting protein on the bullet surface followed by peptide mapping.

Dr. Dammeier constructed a database of organ-specific protein profiles from five cow organs: heart, lung, kidney, liver, and muscle. He used a bullet simulation to collect material, and then analyzed the samples through lengthy LC-MS analysis. This provided classifiers for each organ, against which researchers could compare real-life samples.

Unfortunately, this approach resulted in significant misidentifications using bullets from an actual crime scene, in part due to bullets penetrating multiple organs. “We were unsuccessful because the amount of data collected was insufficient to run the computational methods required to identify organs,” Dr. Dammeier says. Switching to a top-down (intact protein) approach was more successful, because now the organ identification could be made on the basis of organ-specific proteins.

On the question of the physical robustness of DNA versus protein, Dr. Dammeier is more philosophical than some experts, saying, “Longevity strongly depends on humidity, temperature, and other factors.” Since proteomics is the only way to determine organ of origin, its persistence is therefore irrelevant. Even so, one would need to characterize protein expression beforehand in various organs, which involves analysis of the protein itself or of the transcriptome (RNA). But RNA is very shortlived, whereas protein persists for weeks even under adverse conditions.

Initially, the Tübingen group used a hand punch to simulate a bullet passing through flesh and organs. However, shear forces for projectiles traveling 600-700 m/sec (or faster) are difficult to generate by hand. With the assistance of local police, Dr. Dammeier’s group was eventually able to incorporate actual shooting into sample collection. “The material collected was sufficient for a direct classification of more than half the organs, but the results were not as clear as with the punching experiments,” he explains.

Could this difference be explained by the bullet’s much higher velocity, or the heat it generated, relative to a manual punch?

Dr. Dammeier thinks not: “In real shootings, the contact time of the bullet with the organ is shorter than with the manual punch, resulting in less collected material. We do not believe that speed has any other effect on the sample.” One reviewer actually asked him about heat generation in the bullet’s path, but Dr. Dammeier assured him that there was none worth reporting.

Proteomics is by no means an established approach for solving forensics problems. Proteomics has a reputation for being instrument- and expertise-intensive, time-consuming, and requiring a high level of computational acumen.

Dr. Dammeier admits that “there’s not much out there,” while noting that further evolution of mass spectrometry toward greater portability, screening capability, and user-friendliness will help expand that instrument’s role in forensics, as it already has for the detection of illegal drugs, toxicology, and pesticide analysis.