In general, massively parallel sequencing uses smaller platforms that work in parallel to simultaneously sequence up to billions of pieces of a few hundred or fewer base pairs each. Gathering so much information at the same time makes MPS especially useful in forensics.

“MPS technology has been primarily utilized in research environments, but a growing number of DNA forensic laboratories are in the process of validating the technology for forensic typing applications, including generating additional information from highly degraded or mixed samples, such as analysis of DNA from skeletal remains, old bloodstains, or contaminated crime scenes,” says Michael Dickens, business line manager for chemical, biological, radiological, nuclear, and explosive (CBRNE) defense/applied genomics at Battelle (Columbus, OH).

“Because MPS generates the sequence of the DNA instead of simply evaluating DNA fragment length, more forensically relevant information may also be obtained from evidentiary samples for which traditional DNA database searches are unsuccessful or unable to be attempted.”

The information acquired from MPS can be used to predict ancestry, familial relationships, and even some physical characteristics—including hair and eye color— plus some facial features. All of this information can be used in forensics in some way—often providing information that is difficult to get from samples in any other way.

MPS can be used in virtually all human and nonhuman forensic genomics. Cydne Holt, associate director of forensic genomics at Illumina (San Diego, CA), points out that MPS advances human identification from crime scene evidence samples and missing-persons investigations to analyzing unidentified human remains, paternity testing, and much more. “MPS improves public safety and justice [by] driving more cases to resolution with a clearer implication of perpetrators and the ability to exclude innocent individuals,” Holt explains.

In nonhuman forensics, scientists use MPS to analyze samples from crime scenes, such as plant matter, soil, animal hairs, and microbial agents. This technology can also be applied to poaching and the illegal transit of species. MPS also can be used in forensics related to controlling terrorism, such as tracking the movements of targeted individuals or families. 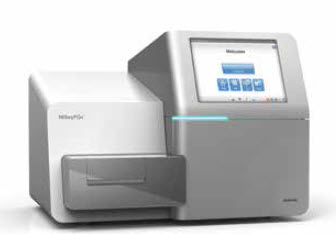 The MiSeq FGx System is a sequencer for forensic applicationsImage courtesy of IlluminaTo support such broad forensic applications of MPS, Ilumina created the MiSeq FGx Forensic Genomics System. Holt says that this device provides a workflow that simplifies the pathway from a DNA sample to data, and the system is validated for the quality assurance standards of forensics. To prepare samples for this platform, scientists can use the ForenSeq DNA Signature Prep Kit. “The ForenSeq kit,” says Holt, “is responsive to forensic analysts’ requests to utilize identification markers for database or reference samples and to allow investigative markers to be typed along with identification markers when analyzing crime scene samples, if desired.” She adds, “The ForenSeq Universal Analysis Software assists with straightforward forensic data interpretation.”

Scientists at Battelle have developed many MPS tools. “Battelle’s bioinformatics technology has been applied to the assessment of signal and noise in mixed human DNA, mitochondrial DNA, and metagenomics DNA,” Dickens says. He and his colleagues have even tested the technology on various MPS platforms, including the associated reagents and software that go with the devices.

New tools open up new applications. “MPS is a great technology for analyzing highly compromised samples— meaning samples that have been exposed to the elements and are therefore highly degraded,” says Lotte Downey, senior global strategic marketing manager at Promega (Madison, WI). This could be useful in missing-person investigations. Capillary electrophoresis remains the main technology in the forensic laboratory, but it usually provides limited results with degraded samples, says Downey.

Battelle’s scientists develop various tools for massively parallel sequencing that can be applied to forensics.Image courtesy of BattelleTo work more effectively with degraded samples, Promega provides PowerSeq amplification systems for MPS in addition to their PowerPlex product line for capillary electrophoresis. The PowerSeq systems also use markers that are well known and frequently used in forensics. “This allows forensic laboratories to focus on learning and implementing this new technology without the burden of analyzing supplementary, unestablished markers,” Downey explains. In 2017, Promega plans to release PowerSeq 46GY, a multiplex of autosomal and Y-STR markers, plus a library quantification kit for MPS analysis.

“Implementing MPS will require changes in instrumentation, workflow, quality control, validation, and training,” says Dickens. To make the move to MPS in a forensics lab, Dickens points out several things to consider, including the MPS platform, training staff, adapting workflows, and validating the entire process.

Holt points out some other factors to consider, and one is cost. “MPS is most cost-effective when a dense set of markers is prepared and analyzed simultaneously,” she explains. This can make the price per sample similar to other technologies, such as capillary electrophoresis, even while generating much more information from one run.

How well a system will work might matter the most. As Downey says, “Because of the differences in MPS technologies, lab managers need to decide which platform fits their laboratory best. Will their choice of platform allow them a choice of chemistry? What markers are truly helpful in their work?” The answers to questions like these will determine the value of MPS to a forensics lab.

Overall, MPS provides more information than forensic scientists had in even the recent past, and it is getting easier to obtain and analyze these data.