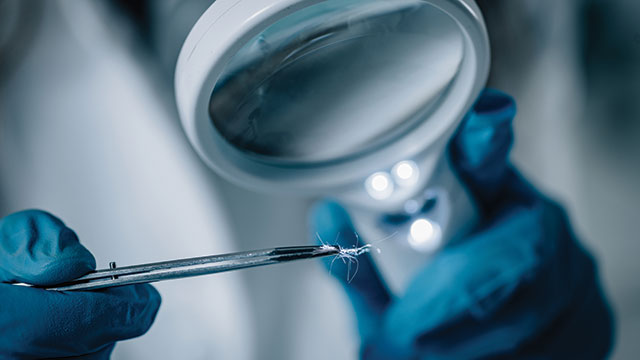 A predominantly rural area, Muskingum County lies just east of Columbus, Ohio. Anyone outside this area who knows anything about it probably thinks of its pottery manufacturing. Like many other areas facing deadly opioid epidemics, however, this county “manufactures” an escalating number of felonies. Recently, the prosecutor’s office requested a funding increase, partly to handle autopsies—more than half of which involve overdoses. To perform those tests, scientists must collect and analyze samples.

According to the U.S. National Institute of Justice, “Forensic toxicology is the analysis of biological samples for the presence of toxins, including drugs.” In some ways, though, that’s just the beginning of this field, and the range of biological samples used keeps increasing, as do other sorts of samples that can lend value to an investigation.

For an overview of this field, Douglas E. Rohde, supervisor of chemistry and toxicology at the Lake County Crime Laboratory (Painesville, OH), explains, “The field of forensic toxicology is divided into three main subdisciplines: postmortem, or death investigation; human performance, including impaired driving, for-cause, and drug-facilitated crimes; and drug testing, which includes pre-employment, workplace, probation, and sports.”

The sample requirements vary by subdiscipline. “In postmortem toxicology, biological fluids and tissues are taken from the body during autopsy,” Rohde says. These samples include blood and fluids from various bodily locations, gastric contents, hair, nails, urine, vitreous (eye) fluid, and tissues (brain, kidney, liver, and so on). In human-performance toxicology, the preferred samples are blood and urine, with breath samples frequently used in alcohol-impairment cases. “Blood provides a window of detection/ drug influence of hours to days, while urine provides a window of detection from days to possibly weeks,” Rohde explains. “Oral fluid samples are becoming more common as collection and analytical techniques improve.” For forensic drug testing, urine is the most common sample, and other options include oral fluid, hair, and sweat.

The potential sample types, though, cover the gamut of a toxicologist’s imagination. Often, the limitations depend on the ability to analyze a material.

The best way to analyze a sample in forensic toxicology depends on the material, what is being asked about it, and how much sample can be collected. When asked about difficult samples to use, Phil Taylor, global marketing manager for food, environmental, and forensic at SCIEX (Framingham, MA), says the toughest samples are those that are a size less than a few milligrams or millimeters. “Sometimes, that’s all investigators have to use,” he says. “So, the analysis technique has to be as effective as possible.” 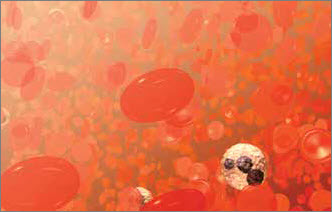 Blood might come to mind first as a useful sample in forensic toxicology, but it’s just one of many options.Image courtesy of the U.S. National Institutes of HealthIn drug-testing blood or urine, analysts tend to use triplequadrupole mass spectrometry (MS) or accurate-mass MS. This allows scientists to “detect trace levels of substances, which may be crucial to an investigation,” Taylor explains.

In any kind of sample, a forensic scientist might have less material than desired, and that creates a challenge. “Small volume samples are often difficult to analyze, because toxicologists must have sensitive methods for analyzing drugs or poisons,” says Madeleine J. Swortwood, assistant professor of forensic science at Sam Houston State University (Huntsville, TX). The samples can be limited for many reasons, including being pediatric samples or coming from decaying bodies.

In some situations, a decaying body creates very complicated samples. “In bad decompositions, we will receive cavity fluid, which is a mix of decomposition fluid, gastric contents, and blood, and is of qualitative value only,” says Barry Logan, senior vice president for forensic science initiatives and chief scientist at NMS Labs (Willow Grove, PA).

Although many samples involve fluids, that is not always the case. “Tissues can be difficult to test because they require more intense sample preparation before we can analyze them on our sensitive instrumentation,” Swortwood explains. To prepare tissue samples, a scientist might homogenize or pulverize them. Also, specific components—like proteins—might need to be removed. “It’s important to clean up samples as much as possible in order to keep our expensive instrumentation free from contamination,” Swortwood notes.

So far, tissues do not make up a big part of drug-related toxicology. “Tissues are rarely tested now, unless [the case poses] questions about distribution, chronicity of use, and sometimes in decomposition or mummification cases,” says Logan. When tissues are used, he says that the preferences, in order, are liver, brain, muscle, and kidney. “These are challenging samples, because methods are typically not validated for them,” Logan explains.

Related Webinar: Tools and Technologies for the Forensic Sciences

Logan describes the challenges involved in analyzing unusual sample types. He notes that if something new must be analyzed, it’s not always obvious how to do it. In those cases, a scientist needs to develop a method on the spot for whatever needs to be analyzed. “These types of cases turn into mini-research projects and take a lot of time and resources to do properly,” Logan says. “Taking shortcuts or testing something you have never tested before without some validation opens you up to challenges when these results go to court.”

Not everything examined in forensic toxicology is biological; there are unexpected sample types, too, Taylor says—“typically, those samples that have an indirect relationship with a forensic investigation.” As an example, he describes a piece of upholstery from a car in which an overdose or poisoning occurred. “An investigator may receive this sample to look for trace residues of drugs or a heavy metal, like lead, to create an association,” Taylor explains. 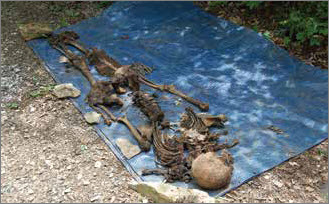 In some cases, scientists must analyze exhumed bones, such as this example from the “Body Farm” at the University of Tennessee, Knoxville.Image courtesy of the U.S. Federal Bureau of InvestigationOther items that might be useful in toxicology testing include drug paraphernalia, implanted pumps, intravenous lines, or syringes. In search of evidence of drug use, says Logan, “we have tested blood stains from clothing and blood retrieved from a bloody nose deposited on a deployed airbag.” He adds, “Other labs have reported the detection of cocaine in semen retrieved from a condom.” Almost any biological fluid or tissue can be tested. Beyond the ones already mentioned, samples of cerebrospinal or synovial fluid also can be used for toxicology testing. “Some unusual samples in postmortem toxicology might be stomach contents or bile,” Swortwood says. “I’ve even tested swabs from skeletonized remains before!”

As Rohde points out, no sample in forensic toxicology is truly unexpected. In terms of complexity, though, he mentions samples of bone or bone marrow in postmortem work. To analyze bone marrow, the bone needs to be cleaned and cut into pieces to remove the marrow, which is then homogenized. The homogenate is usually further processed, which might involve an extraction and possibly drying it—all before analysis. In cases where bodies are exhumed or recovered from fires or explosions, bone samples might be all that forensic toxicologists have to analyze.

Perhaps no sample should be unexpected, but some are certainly a little weird. “The most unusual sample would be the collection of maggots or other entomological species in the case of advanced decomposition of a corpse,” Rohde says. “Analysis of this type of sample can identify a drug the deceased may have taken proximate to death.”

As analytical techniques improve or constraints arise, scientists explore new kinds of samples. “Oral fluid and dried-blood spots are starting to become a trend in forensic toxicology since these are less invasive to obtain, and have shown to be stable matrices to analyze,” Taylor says.

Beyond blood, various other biological fluids can also be used. For example, some labs test breast milk, saliva, and sweat. “Oral fluid is advantageous over blood or urine, as it does not require specialized collection from a phlebotomist or observed collection, as urine does, and cannot be easily adulterated,” Swortwood explains. Some of these samples are already used in various applications. As an example, Logan points out, “Skin patches are used for sweat collection for drug testing in criminal-justice applications.”

Some new approaches could also use eye fluids for forensic toxicology. As an example, Logan’s company is running a project to analyze tears for drugs. These scientists are also exploring whether contact lenses can be analyzed for deposited drugs. Other unusual samples will surely continue to be studied. As Logan notes, “there are a few recent publications reporting the detection of drugs in cerumen—ear wax.” 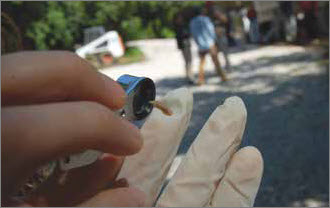 Insects, such as this maggot, can be used in analyzing a corpse.Image courtesy of the U.S. Federal Bureau of InvestigationAs forensic scientists look at new sample matrices, the researchers will also be on the lookout for new chemicals or novel uses of chemicals. One example is carfentanil, which is a synthetic opioid used to tranquilize animals, usually large ones. This drug packs an analgesic punch that is 10,000 times that of morphine, which is bad news when injection drug users start experimenting with it. Although this drug could go unnoticed in studies from many forensic labs, Logan and his colleagues found it from autopsies after intravenous drug deaths, and even in some samples taken from people arrested for driving under the influence of drugs.

Drugs like carfentanil and other synthetic chemicals make it even more complicated for analytical labs to test for the likely possibilities in a forensic study. In fact, that list of possibilities can be turned into a chemically driven moving target. Then, only the most advanced analytical equipment and sophisticated computational tools can handle the challenge. The complexity of the chemical possibilities demands well-trained forensic toxicologists in every lab.

From a rural county in Ohio to inner-city streets, forensic toxicologists face an ongoing barrage of new samples to investigate. Also, those samples must be analyzed for more potentially toxic components, and often at lower and lower levels. In combination, this creates a trio of sample challenges: collection, preparation, and analysis. Forensic toxicology faces trying times today, and the future looks even more complicated.