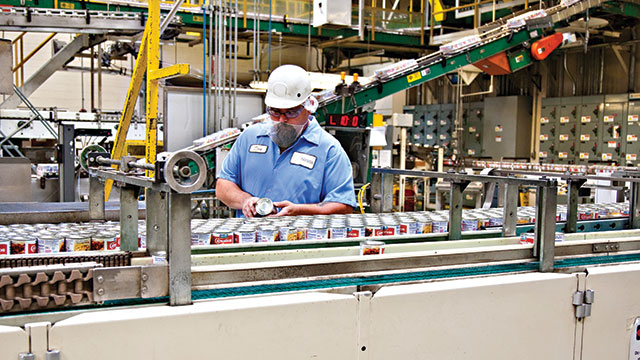 Food companies deal with thousands of products in high volumes, as shown on the production line for Carnation products.
Image courtesy of Nestlé

Beyond speed, these technologies must be accurate and versatile

As Khalil Divan, senior director of food and beverage at Thermo Fisher Scientific in Waltham, Massachusetts, says, “Changes being implemented by regulatory agencies are making high-throughput analysis quite prevalent.” For example, the U.S. Food and Drug Administration (FDA) oversees the Food Safety Modernization Act, which the FDA website describes as “the most sweeping reform of our food safety laws in more than 70 years, [and it] aims to ensure the U.S. food supply is safe by shifting the focus from responding to contamination to preventing it.” To keep up with the required throughput, the technology must analyze samples fast, and it must work with samples at various stages.

The need for high-throughput screening often starts with raw ingredients, which is the first step for some companies in the food and beverage industry. “When the food industry buys raw ingredients, they want to make sure that it’s the right product—not contaminated, not adulterated,” Divan says. “Companies want to test the ingredients very quickly to not hold up the process. So high-throughput and fast analyses are very important at the initial stage of the process.”

The testing of foods, though, goes on throughout the process. “Plants are producing thousands of products every day, and as the products are being developed they want to make sure everything is going according to the protocol,” Divan explains. “So they do spot [tests on] samples during the process.” These analyses must also be performed quickly, because the production line can’t slow down to wait for results from the quality control department.

To test a higher number of samples or to test samples at more points during processing, companies need faster forms of analysis, but speed is not the only factor. “The current technology that people have needs to be updated and also capable of doing fast analyses with ultra-precision and reproducibility,” Divan explains.

To gain speed, a company could add platforms. To test five times faster, for instance, a company could use five times the number of analytical platforms that it currently uses. Some companies might take that approach, but others might not. With the added platforms, says Divan, “the investment becomes much more of a burden on manufacturers, so they don’t want that approach.” He adds, “Industry is looking for instrumentation that can fit the cost and throughput balance.”

Related Article: Arsenic Found in Many US Red Wines, but Health Risks Depend on Total Diet

Some scientists look for ways to improve analysis of very specific problems. As an example, scientists at Aix-Marseille Université in Marseille, France, published a method of analyzing wine for the amino acid proline in 96-well plates. In a 2014 issue of Food Chemistry, they wrote: “Proline is the most abundant amino acid in wine and is an important parameter related to wine characteristics or maturation processes of grape.” These scientists developed a simple plate-based assay that could speed up such analyses. As the scientists concluded, the “simplicity of the protocol used, with no need for centrifugation or filtration, organic solvents or high temperature, enables its full implementation in plastic microplates and efficient application for routine analysis of proline in wines.”

When asked where high-throughput screening is used frequently in the food and beverage industry, Natalia Lysaya, global product manager, bioproduct development business at Molecular Devices in Sunnyvale, California, says, “One of the applications is enzyme evolution.” This field aims to uncover rare bacterial or yeast strains that exhibit desired characteristics induced by directed evolution of enzymatic pathways.

“For example,” says Lysaya, “one of our customers uses high-throughput colorimetric screening of yeast colonies to identify rare yeast mutants that display unique colors indicative of improved brewing behavior to produce great-tasting beer.” She adds, “Another customer screens bacterial colonies to identify unique bacterial strains that exhibit such favorable properties as speed of acidification, resistance to bacteriophage or yeast, and others to manufacture bacterial cultures for the dairy environment— such as probiotics, yogurt, cheeses—or to uncover enzymes that have an impact on flavor in the wine industry.”

This technology, though, requires that many things work together. The assay must select for a precise bacterial strain for the purpose at hand. In addition, the process must work with large amounts of bacterial samples and process them in an automated fashion. To provide those features, Molecular Devices developed its QPix 400 systems. Lysaya describes these as “industry-proved microbial picking solutions— over 600 systems installed worldwide—that are ultra-fast, compatible with automation, and offer advanced imaging and picking capabilities ensuring that the right colony is picked every time.” This platform can pick up to 3,000 bacterial colonies in an hour. 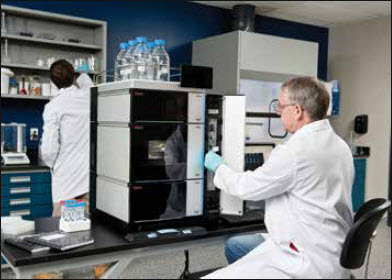 As Divan explains, “When you increase the flow rate, the column generates back pressure. So you need a system that can run at high pressure, and the column technology has to be compatible with that high pressure.” In addition, the faster flow rate can make peaks harder to resolve. To meet such demands, Thermo Fisher Scientific developed its Vanquish UHPLC (ultra-high pressure LC) system, which works with the Accucore Vanquish C18 UHPLC column, which uses 1.5-micron solid-core particles. “This system can run at 15,000 pounds per square inch,” Divan says. “The combination of the instrument, high-pressure pumping technology, high-pressure columns, and a detector system that can take the high-pressure outlet opens up a new area for speeding up LC.”

As an example of the increased throughput of analysis with high-pressure LC, Divan describes an application that measures the sweeteners in beverages. Using the Vanquish, a customer reduced the analysis time from ten to 1.5 minutes.

This industry, though, uses more than LC. To analyze inorganic elements in foods or beverages, many companies use ion chromatography. Higher pressures also speed up this technology. For that, Thermo Fisher Scientific developed its ICS-5000 platforms.

For both of these types of chromatography, according to Divan, “our advances in pumping and column technology provide higher reproducibility than any instrument that we’ve produced in the past.”

“In the food industry, there are many applications that require analysis of hundreds of batches of samples, with each sample sometimes being analyzed for several hundred analytes,” says Sharanya Reddy, strategic applications team lead at PerkinElmer in Shelton, Connecticut. “Take the example of pesticide analysis in food; several hundred pesticides are synthesized and used worldwide.” Governments create pesticide guidelines for the import and export of raw and processed foods. Running all of the required tests can create large amounts of data. “The users spend close to 70 percent of their time analyzing the data in the post-acquisition environment, and the post-processing software can often be the bottleneck for providing fast analysis of such large batches of data,” Reddy says. 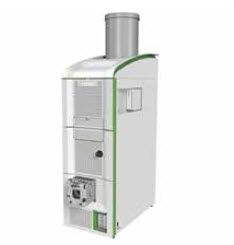 The AxION 2 mass spectrometer can quickly analyze a food for pesticide residues.Image courtesy of PerkinElmerWhen it comes to dealing with pesticides in foods, PerkinElmer provides a fast and accurate solution with its AxION 2 TOF. This timeof- flight MS, says Reddy, “has both high mass resolution and high mass accuracy for comprehensive screening of pesticides.”

This MS also comes with AxION Solo software, which can be used for high-throughput screening. With this software, “the user can quickly identify the presence or absence of hundreds of pesticides in large batches of samples using an easy-to-read, color-coded scheme,” Reddy says. “In addition, the software allows for user-defined area thresholds for peak integration of each analyte for quick visualization of the presence or absence of analytes at or above a regulatory limit of 10 parts per billion.”

If a company wants to use gas chromatography (GC) and MS, one option is Perkin- Elmer’s AxION iQT. Andrew Tyler of Perkin- Elmer’s strategic applications team describes this platform as “a novel hybrid GC/MS/MS system with a fully integrated cold electron ionization source.” He adds, “This is a unique ionization source that enhances the molecular ion by reducing the vibrational energy of the molecules prior to ionization.” As a result, it can be used with high GC flows. Overall, Tyler says, this platform “allows for analysis of a wide range of compounds at high speed, making the technology very amenable for high-throughput screening.”

Even some unexpected devices can be used to screen foods. At the University of Illinois at Urbana-Champaign, bioengineer Brian Cunningham and his team turned an iPhone 4 into a food scanner by adding a small cradle with a few optical components. The modified phone can test foods for the peanut allergen. Cunningham says, “We have been working to make our system more user-friendly and to make a small cartridge that can contain all the necessary reagents for the test, so a person can perform it easily.” Although more work remains, Cunningham says, “I think that an actual product could be fielded in less than a year if there was clearly market interest that could attract resources.” This might not be high-throughput by most standards, but for a parent with a child allergic to peanuts, this could be the fastest tool that they need.

The vast variety of samples in the food and beverage industry makes it a challenge to screen them all quickly and accurately. It takes different kinds of technology to make the right analyses and to do it fast enough to meet the requirements of governments around the world.