Traditionally, experts improved the safety of foods by heating or cooling them, removing water, or using a specific type of packaging. The majority of companies still use those techniques, and also novel ones to remove or inactivate microbes. For instance, subjecting food to high pressure—80,000 to 130,000 pounds per square inch—before and after packaging inactivates most vegetative microorganisms. In addition, high-intensity pulsed electric fields and ultraviolet light can pasteurize juice and other pumpable products. Beyond having safe food, consumers also want processes that make foods seem fresher and minimally processed.

The sheer volume of food served around the world compounds the challenge. Nonetheless, the industry fends off most of the problems by avoiding them. “Prevention is where we spend most of our time,” says David Gombas, senior vice president of food safety and technology at United Fresh. This Washington, D.C.-based trade association includes companies that grow, ship, distribute, or sell fresh produce. Talking about prevention, Gombas says, “We’re successful for the large part.” He says that the fresh-produce industry deals with about seven outbreaks a year, which doesn’t seem like many if you consider that United Fresh’s companies sell one to two billion servings of fresh produce every day. Despite that good record, Gombas says that even one outbreak is “still too many.”

Fresh is Best — And Worst 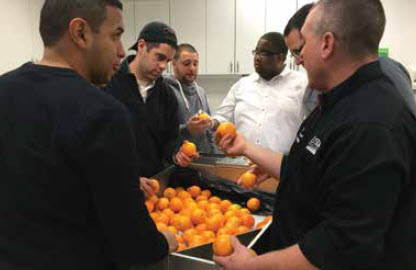 United Fresh, a trade association for businesses involved with produce, runs an inspection training course.Image courtesy of United FreshModern food buyers like fresh products. That’s good for taste, but a bigger challenge at times in keeping that food fresh. When asked about the key issues in food safety for United Fresh companies, Gombas says, “The biggest challenge in fresh produce is that it is fresh.” To keep that food from becoming contaminated, it must be protected from microbes.

“We have no kill step,” Gombas explains. “People talk about chlorine washes as if that’s antimicrobial, but it only gets off the dirt.” So the key is keeping the contaminants away all along. That’s not so easy in agriculture. As Gombas says, “Fresh products are grown outdoors, and they are vulnerable to whatever blows over the fence.”

All the nooks and crannies in produce also create challenges. “Bugs find a way to hide inside the produce, and you can’t reach them,” Gombas explains. Nothing that is available and safe kills or inactivates those microbes.

If produce gets contaminated and no one knows why, the blame usually goes to the water used to irrigate the crop. “The poster child for contamination is water,” Gombas says. “No one can afford to use city water for irrigation, so they use surface water.” Chlorinating that water would eventually make the soil too salty. “So we need technologies that allow you to pump thousands of gallons of water per minute and make it antimicrobial,” Gombas says. “Some existing technologies work for smaller operations but not large ones.”

Keeping food safe goes far beyond farms. Keener says that the biggest danger in foods comes from the aging infrastructure of the food facilities and the processing equipment that they use. “[They are] very outdated,” he says, “and in my view incompatible with achieving the food safety demands of the current marketplace or of the current regulatory schema.”

Keener believes that many of the facilities are too old to update. “If you did an inventory across the U.S., one would find that the infrastructure used for producing food was typically built circa late 1950s, and that’s being generous.” It is not at all uncommon to find century-old facilities used in processing and distributing food. He adds, “Even with the upgrades that have been made, the retrofits are still not meeting hygienic standards that are demanded by today’s regulatory folks.” Yet, the industry as a rule is very reluctant to invest in brick and mortar or new, more hygienically designed processing technologies, Keener says. 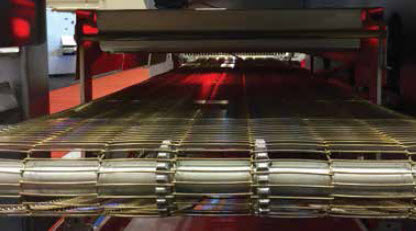 Infrared light can kill microbes on foods that move along a conveyor belt in a food-processing facility.Image courtesy of Tatiana KoutchmaKeeping old facilities and equipment clean poses a serious problem, according to Keener. “The challenges of cleaning and maintaining an aged facility are monumental,” he says. “Even air handling and exchange rates are probably not what one would expect.” He adds, “When many of these facilities were constructed, the interaction between air in the environment and food safety was moot.” Many of the ongoing issues with Listeria, Keener says, implicate a lack of hygienic design in both equipment and facilities.

In many cases, these infrastructure problems might be too big to renovate away. “The food companies and food processing industry need to think about building facilities that are hygienic in the first instance,” Keener says. “In Europe, a number of companies have begun to invest in building hygienically designed facilities and hygienically designed equipment to go into those facilities.” As an example, he points out that U.K.-based Unilever is a “good example of a company leading the charge, recognizing that equipment needed improvements.”

Given all of the constraints—from microbe busting to environmental concerns—no one technology can do it all. In fact, Koutchma says, “There is no ideal technology, but some requirements need to be addressed in any one that is used.” Even within one kind of processing technology, the specific product often impacts the best approach to making it safe. When using light-based technologies, for instance, “you apply light in different forms for different kinds of products,” Koutchma explains. In addition, light-based technologies can be used with prepackaged to packed food, or even to sterilize the packaging.

Even with new technologies coming online, Koutchma encourages experts to not ignore the old ones. She says, “Sometimes the forgotten technologies can be really effective ones.”

A range of products improves the capabilities of testing foods. “Everyone wants to move from growth-based microbial methods of food testing to rapid- based tests,” says Liz Kerrigan, director of commercial partnerships at ATCC in Manassas, Virginia. Some pathogens take days just to grow, whereas a PCR-based method could be completed in hours. As Kerrigan says, “The speed of the test is very important with produce, fruit, or anything with a short shelf life.” In addition to being faster, rapid tests can be more sensitive in some cases.

The size of the needed sample also depends on the technology. Growth-based methods require a larger sample. To switch to a rapid-based method, though, it must be validated to show that it provides the needed specificity and sensitivity.

Developing rapid microbial methods and determining sensitivity are easier with ATCC quantitated nucleic acids. “The quantitative format allows for the generation of a standard curve for determining assay sensitivity,” Kerrigan says, “which is very important in development or in validating a switch from a growth-based to a rapid-based test.”

Kerrigan also points out that ATCC Genuine Nucleics and inactivated organisms can be used as external controls. “When you have an assay that you’re purchasing or developing and you want to evaluate your system, you need something that will not be pathogenic but will mimic the sample that you will be testing,” she says.

ATCC also produces reference strains that can be used in food safety testing. For example, five surrogate E. coli strains recommended by the USDA Food Safety and Inspection Service are now available that grow just like the pathogenic versions, but the strains are not pathogenic. “These can be used in place of pathogens such as E. coli O157:H7,” Kerrigan says, “safely measuring changes in microbial counts during validation studies performed in the food processing environment.”

In some cases, dangerous things get added to foods. Adding an adulterant, says Nicola Vosloo, senior leader for strategy and global applications for PerkinElmer, which is headquartered in Waltham, Massachusetts, “becomes more of a food safety issue when there is a risk to human health.” For example, she mentions melamine in milk powder and the recent scare that cumin and paprika were contaminated with nuts, which can be an allergen for some people.

To help food manufacturers and suppliers detect such problems, PerkinElmer developed its Spectrum Adulterant Screen. Vosloo explains that this screen “takes a novel approach to adulterant detection, with sophisticated algorithms that combine chemometric modeling and residuals analysis to detect both targeted and non-targeted economic adulterants.” She adds, “You can now detect for known and unknown adulterants right alongside your normal materials verification and quantitative measurements.” This screen can be used with PerkinElmer’s mid- and near-infrared instruments.

To really keep food safe around the world, experts must use old and new technologies—from prevention and heat to electric fields and advanced informatics—and advances must continue to be made in food science equipment and the facilities being used. Only this kind of technology and care can keep the world’s food supply tasty, nutritious, and safe.