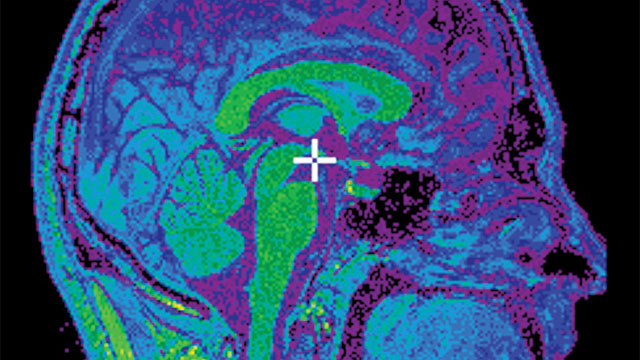 CBRAIN lets neuroscientists collaborate from around the world on large imaging data sets to analyze temporal and three-dimensional spatial differences between diseased and healthy brains.Image courtesy of Marc-Etienne Rousseau

Today's technologies reveal how the brain develops, matures, and degenerates

For centuries, neuroanatomists preserved, dyed, and sliced brains for microscopic examination, and neurophysiologists used a wide range of approaches to measure the signals flying around inside. Most of the techniques allowed brain scientists to look at only tiny pieces of a very large puzzle. They needed to see more and see it more clearly.

Overall, using imaging techniques to analyze the structural and functional features of brains from various animals and humans captures the attention of scientists around the world and from many fields—stretching from anatomy and medicine to computation and social sciences. This explains the U.S. government’s $4.5 billion investment in a 12-year program, the BRAIN Initiative, to map the brain.

Solving the many mysteries of the brain, however, will probably take more time and money than one initiative can provide. In addition, a collection of technologies and techniques will also be required. Fortunately, a neuroscientist’s imaging options keep expanding.

For any sort of imaging modality, two general tools impact its application to neuroimaging, says Ajit Shankaranarayanan, global manager for magnetic resonance neuro applications at U.K.-based GE Healthcare. One is whatever makes data acquisition faster, some sort of accelerator. The other is how the raw image data is converted into meaningful information about the brain. As an example, Shankaranarayanan mentions “segmentation” tools that identify the white and gray matter in a brain image, or software that picks out certain structures or damage.

Tools that help neuroscientists focus on specific features can be useful in basic and applied research. Imagine, for example, a technique that segments the hippocampus from a brain image. This part of the brain plays a fundamental role in memory, which interests basic researchers, and some diseases, like Alzheimer’s, might be impacted by it.

Some of today’s imaging tools can reveal very small changes, like lesions in a brain’s white matter. As Shankaranarayanan says, “These lesions can appear in the white matter in diseases like multiple sclerosis.”

In 2008 at McGill University in Montreal, Canada, neuroscientist Alan Evans and his colleagues started building a brain-mapping resource called CBRAIN. The need for this supercomputer-driven tool arose as neuroscientists examined ever more complex mapping, such as analyzing the temporal and 3D spatial differences between diseased and healthy brains across a large sample size.

Evans says, “There are two big IT-related themes at play in leading-edge research today: big data analytics and international data sharing.” CBRAIN provides a platform for advanced computational neuroscience on big data, and it allows for multisite consortia to collect, store, and share data internationally. Evans says, “The two environments together allow us to build big databases of imaging, genetic, and behavioral data that can be mined to answer many questions from many investigators worldwide.”

Perhaps surprisingly, almost anyone can use CBRAIN. As Marc-Etienne Rousseau, system architect for CBRAIN, says, “The philosophy of CBRAIN is that things can be kept fairly simple for new users, but also can be quite powerful and flexible for advanced users.” All you need is a computer and a recent version of Firefox or Chrome. That gives a user access to tools, computing sites and data storage via a web portal. People with high-end IT skills can use more advanced options.

CBRAIN can handle any kind of data. Rousseau says, “We built it for the general research ‘Big Data’ case where one needs to input data, do something to that data, then output and visualize the results.” He adds, “Our current implementation of the platform is strongly focused on neuroscience, especially structural and functional MRI [magnetic resonance imaging], and processing thousands of scans for studies ranging from neurodegenerative diseases to normal brain development in children is our bread and butter.”

The key to CBRAIN comes from the communities. As Evans says, “Basically, this is research on an industrial scale, as opposed to traditional research conducted in one investigator's lab, often addressing a single question over many years.” He sees value in both approaches but adds, “Big science is here to stay.”

One salient example of this is the so-called Big- Brain project. In collaboration with Katrin Amunts in Juelich, Germany, Evans’ group built a 3D digital atlas of the human brain at 20-micron resolution. This one data set, occupying about 1 terabyte, was downloaded over 14,000 times in the first month after it was published (Amunts et al., Science 2013). Processing over 7,000 postmortem sections from a single brain, the collaborators built a 3D image that can be explored interactively (https://www.youtube.com/watch?v=nJpFvQ0YZLk), with applications in teaching, neurosurgical planning, and basic research.

For medicine, MRI and positron emission tomography (PET) are two of the most common imaging modes. With an MRI, magnetic and radio waves create images of the brain anatomy and basic physiology, such as blood flow. PET creates a 3D image from a radioactive tracer to measure more complex brain chemistry, such as neuroreceptor distribution.

Although much of the imaging from the past focused on structure— and much still does—it also helps image function. “An MR scanner provides the stability so that you can extract functions,” says Shankaranarayanan. For function, though, the signals tend to be very small. That requires a very sensitive technology that can, for example, extract data about blood perfusion in the brain. Shankaranarayanan says, “Perfusion is a function we can look at, and we can also look at oxygenation, indicating whether the brain is active or not.”

Beyond watching processes change, medical experts—more and more—want to quantify them. Shankaranarayanan says, “I see the field moving from looking at the images in a situation to also asking for quantitative numbers, because [they] can help with the diagnosis.”

To make these technologies work faster, scientists at GE Healthcare even look to other fields. For example, to improve structural imaging, Shankaranarayanan says that a technology from communications called compressed sensing helps. “This involves taking a limited amount of data and producing an image using a mathematical algorithm. We combine that with structural imaging so you don’t lose information, but it can make acquisitions two to three times faster.”

To see how a brain is working, scientists often turn to functional MRI, or fMRI, which tracks the oxygenation of the blood when someone is doing something.

“Instead of activating the brain and trying to analyze a network,” says Shankaranarayanan, “we look at the fMRI when the brain is resting.” Then, using the latest technology like multiband, the scientists improve the temporal resolution of the imaging from two to three seconds down to 600 to 700 milliseconds. “Still, this approach preserves network information,” Shankaranarayanan explains. “Also, it’s more comfortable for the patient.”

No single form of imaging is ever likely to answer all of the questions about the brain. Consequently, researchers often combine technologies. It gets easier to do this as vendors make platforms that include various imaging modalities. For example, GE Healthcare recently released its whole-body SIGNA PET/MR. Company background on this platform states “When these two powerful tools are combined, clinicians may be able to see early cellular changes that can be accurately mapped onto MR images.”

By the numbers, autism appears on the rise. In 2012, Thomas Insel, director of the U.S. National Institute of Mental Health, wrote that autism—a broad range of developmental disorders—afflicts one in 88 children. In 2015, the U.S. Centers for Disease Control and Prevention put that statistic at one in 68 children. Maybe this condition is increasing, or it’s being detected more often. Either way, scientists would like to better understand this condition, and imaging helps.

Neuroscientist Rajesh Kana of the University of Alabama at Birmingham says, “Autism is a complex developmental disorder with no known single neural or genetic etiology.” He adds, “Hence, understanding the brain organization and understanding the brain mechanisms are critical in learning about the neurobiology of this disorder.” With neuroimaging, an autistic brain can be examined for its organization and connections, as well as how it responds to external stimuli. “Since the brain can be investigated in live humans,” says Kana, “information gathered about the brain can also be associated with more precise and current behavioral information—rather than resorting to secondary resources, such as patient records or interviews of surviving relatives.” Moreover, a patient can be studied over time, which Kana says is “a vital dimension in the context of neurodevelopmental disorders.”

Exploring this disease, Kana uses several kinds of neuroimaging. Most of all, he uses fMRI to study the brain bases of behavioral and cognitive functions that tend to be affected in autism. “In fMRI,” he says, “we can create specific tasks that probe these functions and track the brain activity underlying such functions and how it is different in individuals with autism.”

He also maps the brains of autistic patients with structural MRI. Kana says, “This allows for the examination of the anatomy of the brain in terms of thickness of the cortex, volume, surface area, and the ratio of the folding in the brain.”

Kana collects other data with diffusion tensor imaging (DTI), which measures water diffusion in the brain, and Kana says that it “provides an indirect measure of the integrity of white-matter cables in the brain.” Consequently, DTI reveals connectivity in the brain. As Kana says, “The complexity of autism may entail distributed brain abnormalities, and DTI provides an important venue to investigate brain connectivity in autism.”

In addition, Kana’s team uses proton magnetic resonance spectroscopy (1H-MRS), which analyzes chemical concentrations in the brain. With this imaging technique, Kana can assess the concentrations of neurochemicals in various areas of the brain, and they reveal the health of the neurons.

“In sum,” says Kana, “these different neuroimaging techniques provide multiple sources and levels of information about the brain in autism.” In a recent study, for example, Kana and his colleagues used MRI, DTI and 1H-MRS to study the brain anatomy, connectivity, and chemical concentration through what Kana calls “a sophisticated machine-assisted pattern classification technique to understand which of these measures would best classify people with autism from neurotypical controls.” The results show that a combination of connectivity in the white matter and information about brain anatomy classified the people as autistic or not with 91 percent accuracy. As Kana concludes, “This multimodal neuroimaging approach emphasizes that the brain abnormalities in autism may not be confined to a single area, [but] rather distributed across different areas at multiple levels and layers.”

In fact, many questions about healthy and diseased brains will require a range of imaging technologies. As neuroscientists acquire more sophisticated tools, they can address more complex questions. As a result, we will learn more about how our brains work and how to take care of them.