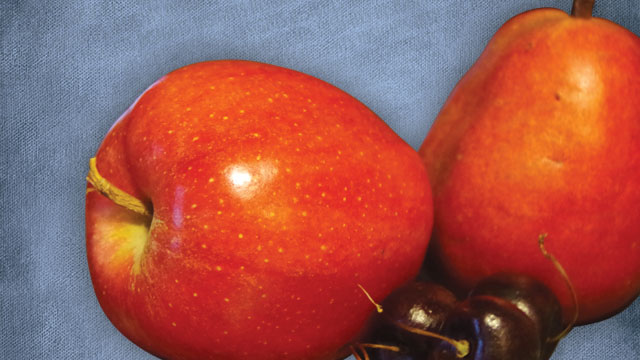 Fruits and other foods and beverages from around the world usually rely on pesticides at some point in the production, shipping or storage, and only sophisticated pesticide analysis can ensure that we can safely consume these products.Image courtesy of the author

Pesticides come in many forms and perform a range of tasks. In short, a pesticide fights a pest. That pest might be an animal, a fungus, an insect, or a weed. Also, the pesticide might prevent, destroy, or repel the pest. So, pesticides include everything from algicides that battle algae to rodenticides that fight off mice, and the concoction can be chemical or biological. Moreover, a pesticide might be made of a single ingredient or some mixture of ingredients. This range of pesticides makes food-testing analysis complicated, but our health often depends on getting the right results.

In particular, pesticide concerns emerge when dealing with beverages and foods. As Katherine Stenerson, principal scientist for Sigma-Aldrich in St. Louis, Missouri, explains: “Pesticides are used in various parts of the agricultural production process to ensure adequate yields and/or maintain product quality throughout shipping and storage.” She adds, “Since pesticides have some toxicity associated with them, the key reason to do a residue analysis is to ensure that we are not being exposed to unsafe levels of these chemicals—either through the food we eat, water we drink, or environment we live in.”

Some experts see the likelihood of our having to face increasing risks from pesticides. According to Vincent Paez, senior director for food, environment, and forensics testing at SCIEX in Framingham, Massachusetts, the need for more food around the world triggered “a surge in the use of pesticides, fungicides, and herbicides on crops to prevent spoilage and increase the life of the crop.” Governments place regulations on the levels of pesticides in foods and beverages to reduce the risks of pesticide consumption.

To meet those regulations, governments require extensive testing for pesticides in foods. “In the case of agricultural products, such as fruits, vegetables, meats, and dairy, testing is required either before the product can be sold to the consumer, or before it can be accepted for import,” says Stenerson. This is no small job. At the International Food Safety Training Laboratory at the University of Maryland in College Park, laboratory program manager Janie Dubois says that the key challenge of pesticide analysis is “the sheer number of them.”

In fact, the numbers can be staggering. When asked how many pesticides can be in beverages and foods, Ilona Matus, in the instrumental analytics division at Merck Millipore in Germany, says, “I don’t think there is an exact number, and the definition itself covers a very wide range of molecules and molecule mixes.” Still, she adds, “On the webpage of one of the contract labs, I found about 500 compounds that they are testing routinely, and further compounds can be tested case by case.”

Beyond the vast number of pesticides, they usually need to be measured at low levels, and often from complex materials. Consequently, pesticide analysis starts with sample preparation. As Matus says, “We need a complex sample preparation, which mainly consists of analyte enrichment and the removal of interfering substances.” She adds, “The steps are sample collection, preparation, extraction of analytes from a matrix, and extract purification.” 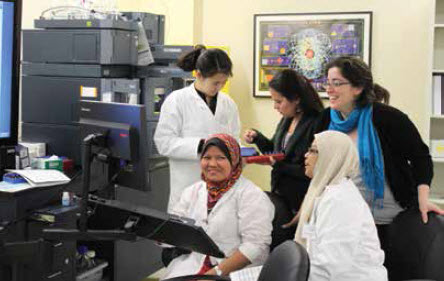 Scientists around the world must test foods and beverages for a wide range of potential pesticides, and many of them learn how at the University of Maryland’s International Food Safety Training Laboratory.Image courtesy of Janie DuboisIn most cases, pesticide analysis includes some form of chromatography plus detection. Nonetheless, Dubois says, “Not all pesticides are amenable to the same instrumentation, but that has improved greatly in the past five to ten years, because we now have many multi-residue methods.” For example, lots of analytical scientists would use liquid chromatography plus triple quadrupole mass spectrometry (LC/MS/MS), which picks up a wide range of pesticides. Still, LC doesn’t pull out all pesticides, so gas chromatography (GC) is needed in some cases.

Although today’s high-resolution MS provides more information than ever before, the technology doesn’t do everything. As Dubois says, “Some scientists get the false idea that because high-resolution MS comes with some pretty decent libraries they don’t need to run standards anymore, but that’s an absolute no-no.” She adds, “You need to have standards to confirm what you are doing.”

The analysis of pesticides tends to be pretty fine work. In many cases, studies look for pesticides with regulatory limits of ten parts per billion. Also, the tests often deal with complex compositions that include pesticides. In such cases, says Dubois, “It can be like looking for hundreds of needles in a haystack of millions.” To figure out the best way to test a specific mixture, Dubois recommends building a network of specialists. As she says, “A conversation over coffee can save two months in the lab. This is why we work hard to help analysts build their networks when we host training events in our facility in the United States.” She adds, “Our lab benefits from strong partnerships with the Waters Corporation and the U.S. government—FDA, EPA, and USDA—that lead us to often have as many or more expert speakers as we have trainees!”

Several factors make pesticide testing more difficult than ever. One is simply volume. “Testing labs are receiving more samples than ever before and are required to get results fast, so there are challenges to keep up with the testing demand,” says Paez. In addition, the results must be right. As Paez says, “A wrong identification or non-detection of a residue can result in big problems— for business and, most importantly, for consumer health.” On top of the large number of pesticides in use, they can change after being applied. Paez says, “Many pesticides metabolize, ultimately resulting in thousands of residues that labs must target in food samples.” 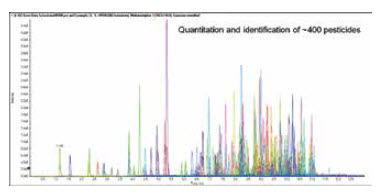 Today’s efficient technologies can analyze a sample for hundreds of pesticides at once.Image courtesy of SCIEXTo meet the demands of throughput and precision, analytical scientists can try new technologies. For instance, various forms of MS can be used. Dubois explains: “Triple quadrupole MS has become the workhorse for pesticide residue analysis.” Several features of this technology make it possible to analyze up to a few hundred pesticides in one analysis. In addition, says Paez, “The use of linear ion trap mass spec, called QTRAP, enables labs to screen for pesticides and compare results to pesticide compound libraries, greatly increasing both the throughput of the analysis while also increasing the reliability of the results.” He adds, “Our data have also shown that these advanced QTRAP workflows can help overcome ambiguity in the results that could be caused by the complexity of the food matrix.”

Other forms of MS also provide benefits in pesticide analysis. As an example, SCIEX developed a form of quadrupole time-of-flight MS called TripleTOF. Paez says, “This workflow enables labs to search for non-targeted compounds beyond their standard list, allowing the detection of novel compounds, metabolites, or other residues that may have safety significance.” He also points out that this technology includes “data processing tools, which allow scientists to more easily assign an actual identity of detected unknown compounds.”

The complexity of possible pesticides, the level of detection needed, and the multipart matrices make analytical scientists desire simpler techniques. One is called QuEChERS, which stands for “quick, easy, cheap, effective, rugged, and safe.” At the 2002 European Pesticide Residues Workshop in Rome, scientists from the U.S. Department of Agriculture presented this method to extract and analyze multi-residue pesticides from food samples, and then published it in 2003 in the Journal of AOAC International. Matus says, “The main advantage of QuEChERS is its ability to remove a large quantity of unwanted interferences from a large variety of food matrices.” As a result, this technique quickly gained favor for pesticide analysis. Over the past ten years, says Stenerson, QuEChERS has become “a very common method for doing sample preparation of agricultural commodities for pesticide residue testing.”

This technique starts with an acetonitrile extraction, followed by adding salts to partition the layer that contains pesticides. The final extract can be analyzed with GC or LC. “In order to meet the low detection levels and maintain performance of their GC and LC instrumentation,” says Stenerson, “most labs do a cleanup step as part of the QuEChERS method.” She adds that such a step is especially crucial when testing fat-containing foods—such as avocados, fish, and nuts—or the fatty background may reduce sensitivity and result in higher detection limits.

For fatty foods, there are new innovative technologies available for sample cleanup. For instance, Stenerson says, “The use of zirconia-based silica sorbents provides better cleanup of fats than one gets with a traditional sorbent mixture such as PSA/C18.” She adds, “Zirconia- coated silica works to remove fats by retaining fatty acids and mono and diacylglycerols.” It can be used alone or combined with C18-functionalized silica. “The addition of C18 provides retention of some triacylglycerol background in addition to the fats retained by the zirconia,” Stenerson explains. For example, Sigma-Aldrich developed various versions of these zirconia-based sorbents: Z-Sep, which is zirconia-coated silica; Z-Sep/ C18, which is a blend of zirconia-coated silica and C18-functionalized silica; and Z-Sep+, which is the single silica material functionalized with C18 and zirconia.

The choice of which cleanup sorbent to use will depend on the specific needs of the application. Stenerson says, “Generally, for pesticide residue analysis, we recommend the use of the Z-Sep/C18 for samples containing less than15 percent fat and Z-Sep+ for samples containing more than 15 percent fat.” She adds, “Z-sep only, without C18, is recommended for the analysis of highly hydrophobic analytes, such as organochlorine pesticides, since it will not retain these compounds.” The growing range of pesticides and ongoing changes in regulations will continue to drive the evolution of pesticide analysis. In fact, the technology must continually improve, from sample preparation through detection. Furthermore, the analysis of the results must keep pace with changes in everything from the compounds and technology to regulations around the world. These analyses ensure that foods and beverages remain as safe as possible for consumption everywhere.