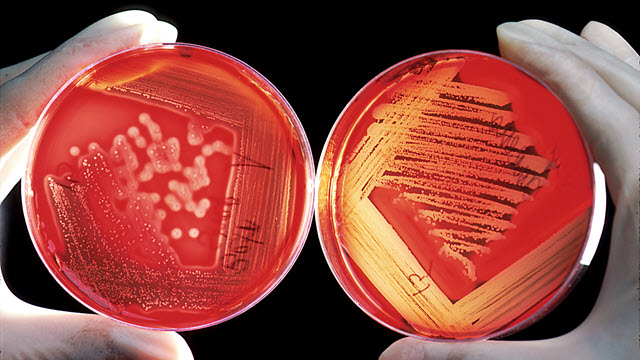 The notion of using mass spectrometry (MS) to identify microorganisms dates back to 1975, when John P. Anhalt proposed the idea. However, the mass spectrometers at the time fragmented the sample too much, preventing widespread adoption of the technique. With the advent of matrix-assisted laser desorption/ionization (MALDI), a ‘soft’ ionization method that did not induce extensive fragmentation, the idea became a reality. In a landmark paper in 2008 by Mellmann et al., followed in 2009 by Seng et al., MALDI-TOF was able to correctly identify bacterial isolates down to the species level in ca. 84 percent of cases. Within a decade, the method, tried and tested by laboratories around the globe, was adopted in the clinic as a tool for microbial identification.

Matrix-assisted laser desorption/ionization time-of-flight (MALDI-TOF) is an MS technique that measures molecules’ masses without causing a significant amount of fragmentation. It works by depositing a biological sample onto a spot on a ‘target’ plate, embedding the spot within a drop of ‘matrix,’ and directing a laser at it. The laser ablates a layer of proteins from the spot, together with matrix, which ionizes the protein within the resultant hot cloud of gas. The ionized proteins are then guided into the mass spectrometer, which produces a spectral readout of detected ionic molecular species.

MALDI-TOF is routinely used in microbiology laboratories to identify microorganisms suspected of causing infections in patients. Patient-derived biosamples are cultured, and a colony is spotted onto the MALDI target plate, treated with formic acid and matrix, and analyzed by the MALDI-TOF instrument. The resulting spectrum is compared to a database to yield a ‘hit’ that identifies the microorganism present in the colony, akin to fingerprinting in humans, which matches to a unique individual.

Bench-to-bedside: MALDI-TOF debuts in the clinic

MALDI-TOF is now a mainstay in many microbiology laboratories with clearance by regulatory bodies, including the FDA, for the identification of certain bacteria and yeasts. ‘Research only use’ (ROU) databases are also available to identify microorganisms not yet cleared by the FDA and custom databases can also be constructed to more accurately reflect local microbial strains or rarer species not adequately represented in commercial datasets.

The rapid integration of MALDI-TOF into the clinical microbiology lab can be accredited to its numerous advantages. The method is untargeted, which means prior knowledge of the infectious agent is not required since identification relies on matching in a database. The level of certainty in a match is calculated by an algorithm, thus eliminating the errors from human judgment that plague traditional phenotypic analysis methods like morphological analysis. Though acquiring the machine comes with a relatively hefty price tag, the cost per sample is very low, which translates to significant savings in operational costs for a laboratory. Finally, while the culturing step requires time, acquisition and matching of the MALDI-TOF spectrum itself is achieved within minutes.

The need for a time-consuming culturing step on solid media has been perceived as a weakness of the MALDI-TOF since it delays the time to a patient’s diagnosis. This contrasts with molecular methods, such as the polymerase chain reaction (PCR), which may be performed on nucleic acids purified directly from biosamples without losing time for culturing. Analysis by MALDI-TOF of microorganisms straight from biological samples, such as blood or urine, is not feasible due to the abundance of host proteins, which also contribute to the spectrum and conceal spectral features attributable to the microorganism, foiling identification efforts.

Potential identification of biofilms by MALDI-TOF may also be possible, although this is still in the very preliminary stages. A biofilm is an integrated community of microorganisms growing as a dense coat over surfaces, which is more resistant to antibiotics and is therefore of clinical importance. Biofilms can develop on a range of surfaces, including at hospitals, on medical devices, or within the patient’s body.

The analysis of biofilms by MALDI-TOF has its limitations. It may be complicated by the presence of the extracellular matrix, which is generated by the microorganisms colonizing the biofilm. Also, MALDI-TOF could not differentiate earlier versus later stage Pseudomonas aeruginosa biofilms in one study, although it could distinguish the last dispersion stage when cells were released to colonize other surfaces.

MALDI-TOF is capable of identifying organisms down to the strain. One study sought to determine whether MALDI could discern between yeast Candida parapsilosis strains that grew as biofilms from those that didn’t. Although a trend was observed, the difference was not significant, but did point to a potential application. Another study was able to identify 72 percent of species from biofilm samples in a small pilot experiment testing various sample preparation methods. In another study, implementation of an algorithm to MALDI-TOF data could distinguish oral Actinomyces strains within subgingival biofilms. Although preliminary, these findings suggest a potential use for MALDI-TOF in identification and characterization of biofilms.

After huge advances in the past decade, the technology is still evolving and MALDI-TOF continues to improve the microbiologist’s arsenal of tools. Better MALDI-TOF protocols promise to deliver faster microbial identification on a broader range of substrates, which it is anticipated, will translate to better patient care.