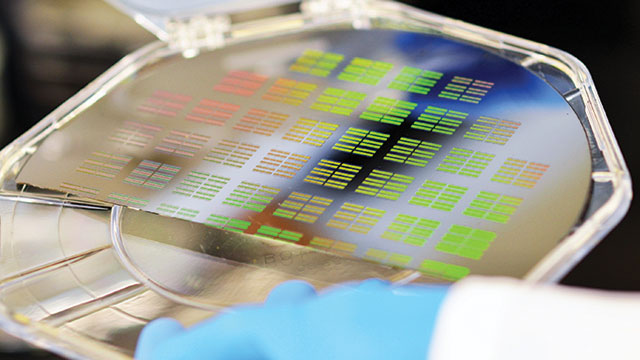 A silicon wafer designed to sort particles found in bodily fluids for the purpose of early disease detection.Image courtesy of IBM Research

Working at billionths of a meter—a nanometer—makes some things complicated and others greatly simplified.

With membrane-based separation, scientists and engineers can work with particles in the 1–100 nanometer range. These tools can remove viruses from a sample, concentrate nutrients in foods, desalinate water, and much more.

Many industrial processes require isolation of nanoscale molecules from a mixture. “Enzymes—pervasive across industries from medicine to cleaning products—must be isolated from the cultures or the raw products they’re produced in,” says Benjamin Wunsch, research scientist at IBM Research (Cambridge, MA). “The growing field of biologics, which are typically peptide-based medicines, requires nanoscale separation to isolate the final active product.”

At the research bench, many crucial experiments include high-resolution separations. As Wunsch notes, “A vast part of our understanding of biology has come from the ability to purify individual types of biomolecules so we can study their function.” That’s true of DNA, RNA, and beyond. The development of nanoscale materials, like carbon nanotubes, pushes the capabilities of separations to even finer levels.

What really happens in a separation process? “All separation depends on creating an energy barrier that ‘gates’ the ability of a particle to move or locate somewhere in space,” says Wunsch. Getting the gating right depends on some property of the particles, such as size.

Filtration, for example, can provide nanoscale separation. Wunsch describes this basic approach: “You use a medium with small holes or pathways that only let particles that are smaller than the hole size through, while larger particles get stuck in the medium.”

In many cases, separation gets interpreted as a mechanical process, like using filter paper in a basic chemistry lab, but molecular processes are also involved. To capture a specific protein from a blood sample, scientists can use molecules, such as antibodies, attached to a surface, like a glass slide. The binding molecule captures the targeted one, and everything else gets washed away.

“This type of separation can be extremely efficient, as you can, in theory, pull out a single desired colloid from a complex mixture, but the difficulty is that you have to find or make the binding partner for your target colloid, and that can be complex and expensive, especially if you have to search through many candidates,” Wunsch says. The sample matrix impacts the method. For air, high-efficiency particulate air (HEPA) and ultra-low particulate air (ULPA) filters can remove submicron particles by absorbing them or excluding them based on size.

Nanowires and nanoparticles can be used in advanced polymers and ceramics to improve a membrane’s performance by increasing its selectivity and durability.

Running a sample through a series of tiny channels, a field called microfluidics, is another means of separating components of a sample. “The aim here is to take advantage of micro and nanoscale properties to increase the effectiveness of nanoscale separation,” Wunsch says. A series of separation techniques—including size-based, molecular mechanism, and more—can be performed on the same microfluidic chip. “With nanoscale engineering of separation systems, there is a real opportunity to achieve high precision by using well-defined structures that can interrogate individual particles, opening a new generation of separation capabilities,” Wunsch concludes. 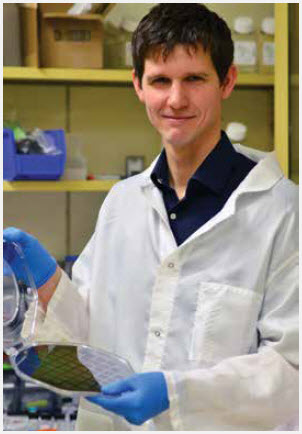 Ben Wunsch of the nanobiotechnology team at IBM Research holding one of the silicon wafers.Image courtesy of IBM ResearchOver the past decade, membranes have moved from one-dimensional elements, like carbon nanotubes, to two-dimensional forms of materials composed of graphene, polymers, and zeolites. “Such materials provide extreme thinness—which enables ultrafast transport, increasing the permeability and thus energy efficiency—while still remaining highly selective due to well-defined nanometer-size pore diameters,” Celebi says.

Those advanced two-dimensional materials can be combined with polymers to make mixed-matrix membranes. With these, Celebi says, scientists can make “a new generation of cost-effective and scalable membranes.”

FLOW IN A FOREST

In deterministic lateral displacement (DLD) technology, a sample goes through a “forest” of pillars. The arrangement of the pillars determines what can be separated and how. “By changing the way the pillars are lined up, you can deflect particles in different directions, and by changing the spacing between pillars, you can select out the size of particle you want to separate,” Wunsch says. “It’s a very flexible and versatile concept.”

DLD separation also provides some valuable features, one being continuous operation. With a filter, for example, samples get separated in batches, but DLD can constantly separate samples. Furthermore, DLD can actually concentrate the separated product, which Wunsch notes is a very rare capability in purification technology.

Wunsch and his colleagues at IBM developed nanoDLD, which can separate particles down to 20 nanometers. “We’ve shown that you can achieve excellent resolution with biocolloids, such as DNA and lipid vesicles,” he says.

A lot of innovation has taken scientists from paper filters to nanoDLD. The outcome is the ability to split samples into finer and more accurate collections of components, which has opened up new possibilities for industry, medicine, and research.

A New Way to See How People Feel about Artificial Intelligence

A New Way to See How People Feel about Artificial Intelligence