Criminologists Can Now Use Even Tiny Traces of Genetic Evidence

The genetic fingerprint in DNA lies in the arrangement of its components—its sequence, which arises from the order of four nucleotides. The human genome consists of billions of nucleotides. So when forensic scientists need to determine the sequence of a DNA sample, they need a fast technique like next-generation sequencing (NGS).

When asked about the key applications of NGS to forensics, Rich Guerrieri, the identity management forensic DNA research leader at Battelle in Columbus, Ohio, says that they are “the analysis of a wider range of genetic markers coupled to an increased resolution at each marker.” He adds, “This expanded scope allows for other kinds of markers, such as those that can predict the ancestral and physical characteristics of an individual, to be gleaned from a small sample left at a crime scene.” Although a DNA sequence can point a finger at a criminal, “The expanded data is also valuable for excluding individuals as potential contributors of DNA found in a sample,” Guerrieri notes. So DNA sequencing can implicate or exonerate suspects.

When compared with other sequencing methods, NGS is all about more—more data, more details. “There’s much more information in each sample than is currently recovered with established techniques,” says Keith Elliott, senior manager of global marketing human identification and forensics at QIAGEN (Hilden, Germany). “It’s not so easy to analyze a sample from more than one contributor, such as a cigarette butt smoked by two people. Separating the two DNA profiles is challenging, but NGS gives higher levels of discrimination, making it much easier.” That means more mixtures of samples can be resolved, which means more crimes can be solved.

Still, some hurdles must be surmounted. “The current capillary-electrophoresis workflow has been optimized for criminal justice over 20 years,” says Elliott. “So moving to NGS requires reoptimizing the entire process, developing new standards and new approaches to interpretation.” He adds, “Some countries don’t even have a legal framework for applying NGS.”

And that’s just the start of making the transition. “There are several operational challenges for individual crime labs that seek to implement NGS,” Holt explains. “Labs needing accreditation must perform internal validation to understand the typing method, become acquainted with its limitations, and finalize their procedures.” On top of that, she notes, “Labs must train their staff, implement quality assurance programs, and integrate updated workflows into routine operations.”

The application of NGS to forensics crosses areas of expertise—molecular biology, criminology, and law. Consequently, says Holt, “Finding the resources in the individual labs to implement NGS along with partners across the greater criminal justice system is a key challenge to its widespread adoption.” She adds, “These challenges have been met before when mainstream technologies have been applied to forensic analyses, and are overcome, especially when efficiencies are realized and public safety is positively impacted.”

Increasing the use of NGS in forensics also depends on platforms made for the task. As Holt says, “The MiSeq FGx Forensic Genomics System was developed to specifically address needs of forensic laboratories that analyze genomic DNA.” Illumina also makes the polymerase chain reaction-based ForenSeq DNA Signature Prep Kit, which, Holt says, “improves forensic DNA typing by combining multiple types of forensic polymorphisms into a single analysis, provides more information about precise alleles via nucleotide identification instead of only fragment length, targets small amplicons for success with degraded samples, and produces ‘investigative leads’ through visible traits—such as eye and hair color and biogeographical ancestry—when there’s no known suspect and no database ‘hit.’” 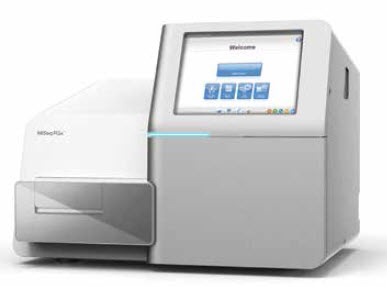 Dedicated NGS platforms, like the MiSeq FGx Forensic Genomics System, make this technology accessible to an expanding base of users.Image courtesy of IlluminaOther companies also design workflows for NGSbased forensics. “With dedicated forensic sample prep, library prep, and other preanalytical components, forensic NGS assays, and bioinformatics, QIAGEN develops sample-to-insight workflows for forensic scientists,” Elliott explains. As an example, QIAGEN develops NGS assays aimed at single nucleotide polymorphisms (SNPs) and short tandem repeats (STRs), which consist of a repeating series of two–13 nucleotides. “The QIAseq Investigator SNP ID Panel, for instance, is designed to target SNPs that can be used for human identification,” Elliott says. “SNPs are not currently routinely used in forensics, and a panel containing only SNPs is a simpler and more practical option for forensic experts to start familiarizing themselves with NGS.” He adds, “QIAseq Investigator SNP ID can complement and be used in parallel with capillary electrophoresis–based work.”

As the use of NGS in forensics increases, the number of dedicated platforms will expand as well. Thermo Fisher Scientific (Waltham, MA) just released its Applied Biosystems Precision ID NGS System, which was designed specifically for human identification. “It includes automated sample preparation for next-generation sequencing using our Ion Chef System to streamline sample preparation with minimal hands-on time,” says Sheri Olson, director of product management. “The Precision ID NGS System also provides the flexibility to allow labs to choose forensically relevant content so users can pick the right content to solve the crime and meet their regional legal needs.”

The Precision ID NGS System’s workflow starts like traditional forensic capillary electrophoresis: collect a sample, extract the DNA, quantify it, and clean it up for downstream fluorescent detection. “The Ion Chef automates the use of Ion AmpliSeq–targeted panel NGS chemistry to tag the genomic DNA with primers for the region of interest,” Olson explains, “and then these tags can be sequenced and analyzed at the base level using the Ion S5 or S5XL system.” She adds, “The NGS workflow is similar to what forensic scientists already use in fragment analysis, but by supplementing traditional [capillary-electrophoresis] methods with NGS technology, it allows users to see a greater depth of possible investigative lead information per casework sample such as phenotype, ancestry, and identity—all depending on the tags that they use.” 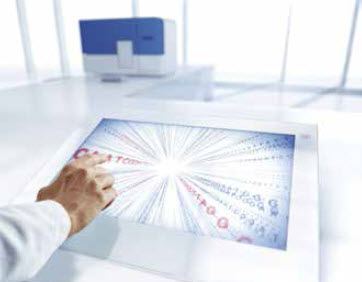 Next-generation sequencing can unravel crimes by analyzing— piece by piece—genetic information from a crime.Image courtesy of QIAGEN.With NGS, more is better, but more is also more complicated. As Guerrieri explains, “The sheer amount of data that is generated during an NGS run, which can be orders of magnitude greater than that generated using current technologies, is one key challenge.” To deal with data, forensic scientists using NGS must build effective techniques to store, retrieve, and keep data secure. Guerrieri also points out other challenges with NGS, including “separating the voluminous signal from the background noise, effectively maximizing the utility of the data, and ensuring consistent interpretation of the data.”

Analyzing so much data requires specialized software. As an example, Illumina developed its ForenSeq Universal Analysis Software, which Holt says is “built specifically for forensic genomics and in collaboration with forensic experts around the world.” Likewise, QIAGEN also offers a range of software solutions. The Biomedical Genomics Workbench is used for both SNP and mitochondrial DNA analyses by human identity labs, according to Elliott.

As mentioned above, a cell contains DNA in the nucleus and mitochondria. When it comes to mitochondrial DNA, says Guerrieri, “only about 4 percent is captured” in most analyses. Nonetheless, he and his colleagues can “capture genetic information from the entire human mitochondrial DNA genome,” and this “allows the entire genome to be analyzed and compared in a case, providing a considerable advancement over the existing capabilities.” He adds, “This capability can be applied to the analysis of human skeletal remains, potentially leading to the identification of missing persons.”

Illumina’s MiSeq FGx Forensic Genomics System could also be used in missing person cases. At King’s College in London, the Forensic Genetics Group has used this platform to analyze relatedness of people through DNA sequences. In one comparison of two people, David Ballard, a postdoctoral scientist in the group, says, “We were able to prove that they were related as parent and child, thanks to the breadth of markers within the ForenSeq DNA Signature Prep Kit.” He adds, “Without the MiSeq FGx System, proving that would have been very complex, if not impossible.” This capability of proving relatedness could be used in missing person cases and in identifying disaster victims.

In some legal cases, NGS can also be used for paternity testing. Elliott mentions that a paternity lab in Sweden came to QIAGEN to find a way to discriminate between very closely related individuals. “Capillary electrophoresis does not always produce enough information,” he says. “The paternity lab worked with QIAGEN to develop an SNP panel, and the lab is implementing it in its paternity workflow.” He adds, “Because NGS is such a new and complex workflow, customers want a partner to help them simplify it.”

In this complex world of forensic technology, even terminology must be adapted. In the January 21, 2016, issue of Forensic Science International: Genetics, for example, an international team of scientists wrote about the need for at least minimal nomenclature requirements when applying NGS to the forensics of STRs. The scientists wrote: “When an STR contains a complex arrangement of repeat motifs, the level of genetic polymorphism revealed by the sequence data can increase substantially.” The complexity of an STR makes capillary electrophoresis insufficient for capturing all the detail, so NGS must be used. In making that forensic transition, the authors point out the need for “nomenclature of STR sequence data.”

So bringing NGS to forensics demands advances in technology through terminology. The results could unravel even once-unsolvable crimes.