Readers of Lab Manager are well aware that high-performance liquid chromatography (HPLC) and mass spectrometry (MS) are making inroads into diagnostics, forensics, and other nontraditional markets. Plenty of interest remains, however, in molecular techniques that address the unique needs of clinicians and drug developers. The ZipChip device from 908 Devices (Boston, MA) represents a novel embodiment of microfluidics, a relatively established technology. About the size of a microscope slide, ZipChip features microchannels etched into glass, which perform capillary electrophoresis (CE)-like separations on complex samples. “The chip functions as a sample preparation device, separations platform, and electrospray ion ization [ESI] source for MS,” says Chris Petty, 908 Devices’ co-founder and VP of business development. 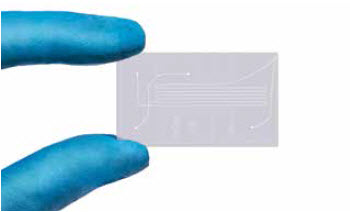 As An MS Interface

Like conventional CE, ZipChip contains a separation channel along which a voltage is applied; at one corner is the ESI MS interface.

ZipChip is theoretically adaptable to any ESI MS system. In practice, MS vendors have their own proprietary mechanisms for mounting the source and introducing the sample. 908 first focused on Thermo Scientific’s (Waltham, MA) Exactive, Q Exactive, and LTQ Orbitrap MS platforms. Petty describes modifying ZipChip to other MS instruments as “an engineering exercise.”

Microfluidic analyzers have been around since the late 1980s, most notably with the lab-on-a-chip devices. Zip-Chip maintains some similarities but Petty prefers not to use lab-on-a-chip terminology. “It leaves a bad taste, because lab-on-a-chip promised much but delivered little.” ZipChip does one job—serving as an MS front end—very well. Its only limitations are that analytes must be charged, which most soluble species are. “If not, it won’t move through the channel and we won’t detect it.”

Prep-free analysis is partly a result of ESI’s soft ionization, which allows the spectrometer to do some of the separation while sparing delicate molecules from early fragmentation. It is also a strategic benefit.

“The advantages of low sample prep workflows tend to be trivialized,” Petty says. “But particularly as you move toward clinical analysis, the most relevant time feature is the end-to-end workflow, not the actual measurement time.” Analyzing compounds as closely as possible to their normal existence is a huge advantage as well. “Sample preparation often introduces error and may affect the analyte. Being able to move to compounds that are as close to their normal existence is a huge advantage, particularly for products of biomanufacturing and in clinical settings.”

When You Know What You're Looking For... 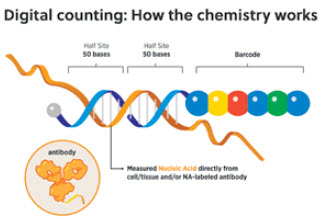 The schematic shows that fluorescent barcodes are attached to DNA, RNA, and proteins using labeled antibodies. The fluorescent barcodes enable direct detection of DNA, RNA, and proteins simultaneously with multiplexing. This technology enables the detection of hundreds of targets in a single assay.The nCounter system from NanoString Technologies (Seattle, WA) uses digital bar coding and single-molecule counting for direct measurement of 800 or more specific genes in one operation. Unlike polymerase chain reaction (PCR), nCounter does not require gene application, and works on samples as small as 300ng for DNA and as small as 50ng for RNA. Conventional multiplexed assays cover only 25 or so genes.

Bar code detection employs two probes of approximately 50 bases: A reporter probe carries the signal or target gene while the capture probe immobilizes it for reading. nCounter is the underlying technology for three FDA-approved companion diagnostics, and under regulatory review for two others.

All-digital, single-molecule quantification represents the future of biomedical analysis, says NanoString senior VP of research Joe Beechem, PhD. “PCR is an old technology that has not changed much in the past 25 years. The answers it provides are limited.” Many PCR methods are limited by off-target amplification. “We don’t amplify genes, but rather link them to bar codes that act like a physical address. Single-molecule counting by single molecules is the ultimate digital detection method.” Note that this is not the same as single-molecule detection. “It doesn’t mean we can find a single molecule within a sample. It’s not single-molecule sensitivity. Nobody has [that] capability,” Beechem adds. Bar coding will detect nucleic acids down to femtomolar concentrations, however, which is pretty good. 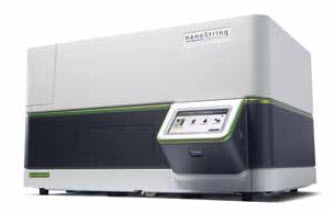 The nCounter® SPRINT Profiler enables the simultaneous detection of DNA, RNA, and protein molecules in tissues and/or cells.NanoString has an ongoing collaboration with the Broad Institute (a Harvard and MIT collaboration) covering infectious diseases. A Broad scientist is currently on loan to the company to investigate methodologies and instrumentation for performing near-real-time “superbug” detection without the usual need for several-day blood cultures.

Applications abound in drug discovery. For example, NanoString has discovered that when a bacterium is exposed to an antibiotic, the organism modifies its internal transcriptional programming. “That is what allows us to get this high information content,” Beechem says. “By examining how it changes its cellular pathways, we can de- termine if it will be successful in escaping that antibiotic.

“Biologists are just now beginning to appreciate counting, but that approach will one day be the rule,” Beechem explains. “Analog counting does not even come close in terms of quality.” There are not a lot of intrinsically digital methods out there.

The large number of targets or events allows NanoString to quantify not only native proteins, but also those that have undergone post-translational modifications indicative of ad- aptation. High-level multiplexing also allows what Beechem calls 3-D biology: the simultaneous analysis of DNA, relevant classes of RNA, proteins, and changes in these profiles resulting from perturbations such as drug administration.

Kicking the Tires, One by One

RNA interference (RNAi) is a tool widely used in functional genomics for identifying genes involved in disease and providing therapies to treat them. Discovered and 37 commercialized in the early 2000s, it is a tool that together with genome editing has changed the landscape of the life sciences—although not as radically, from a therapeutic perspective, as was originally hoped.

Neil Emans, PhD, CEO of Persomics USA (Waltham, MA), draws on analogy to explain how scientists use RNAi: “The human genome has about 20,000 genes and a typical car has 20,000 parts. You could figure out what the car parts do by removing them one at a time and noting the effect.” Different things occur when one removes a bumper, the rearview mirror, the steering wheel, or spark plugs. “That’s the RNAi-based model for studying cells. We systematically introduce short interfering RNAs (siRNAs) and turn genes off one by one to measure how cellular function changes.”

siRNA libraries exist for all 20,000 human genes. Scientists use these libraries to screen the human genome and find new drug targets, e.g., in the presence of a drug, inhibitor, or enhancer.

The scale of RNAi experiments creates a logistical challenge in the lab, as comprehensive studies require testing all 20,000 genes. Until now, screening has been driven by automation in microtiter plates, an expensive and expertise-intensive proposition that has been available only to well-funded laboratories or core facilities.

Persomics technology provides the full range of capabilities of RNAi experimentation while eliminating the “big science” requirement. The company has created arrays of siRNAs printed as spots on flat, inert glass, analogous to but much denser than microplate formats conventionally used in biology. Experimenters culture cells, e.g., immortalized human cancer lines, on top of these arrays and wait a few days. The only manipulations required are culturing the cells and adding appropriate fluorescence tags before reading. Initial products comprise up to 3,200 spots of interest to the disease under study. Persomics has demonstrated a whole-genome array as well.

Pricing will be generously competitive with the costs of setting up conventional RNAi investigations. “The cost will be significantly lower than setting up a conventional microplate-based experiment,” Emans says.

Cells growing atop the one-third-millimeter printed siRNA spots take up the oligonucleotide, which turns off the appropriate gene. Emans compares the ability to conduct such experiments to the invention of the printing press. “Before Gutenberg, every book was copied by hand, letter by letter, in a manner not unlike setting up large siRNA experiments on microplates. We print an entire ‘page’ at once on which each spot is an individual experiment. Our printing method allows producing arrays at commercial scale. You no longer need robotics, just a microscope and a competent person at the bench.”

Initial products, due in early 2017, will feature subsets of the human genome. As part of its business model, Persomics will offer these entry-level sub-libraries to investigate, for example, kinases. Users will select several subarrays to cover their pathways of interest and eventually, depending on how the market evolves, move toward more comprehensive, more complex whole-genome arrays. “Our rollout allows researchers to use the technology, then grow their applications,” Emans tells Lab Manager .

Applications include the gamut of processes under the control of siRNAs, which is effectively everything going on inside cells: drug action or resistance, knockdowns for specific phenotypes, hormone activity, signal transduction, protein transport, virus infection, and others. One could envision investigations of cancer disease status, drug effectiveness, or prognosis, uses that Emans calls “exciting applications down the road.”

But How Do I Read It?

The key to analyzing Persomics’ RNAi arrays—and what makes these assays affordable in the first place—is the availability of inexpensive, high-quality, automated microscopes and imaging systems.

For this critical component, Persomics has been inves- tigating a platform from BioTek Instruments (Winooski, VT)—the Cytation Cell Imaging Multi-Mode Reader, which BioTek offers at a price point that is affordable for many academic labs. The Cytation 5 Multi-Mode Reader, which was introduced in 2015, acquires image sets that visualize an entire Persomics array, and analyzes individual spots for intensity-based gene knockdown and specific siRNA-induced phenotypes.

Automated reading is Cytation’s claim to fame for RNAi array analysis. “The formats of these dense, printed arrays can be pre-stored in our image acquisition software,” says Peter Banks, PhD, scientific director at BioTek Instruments. “The instrument performs all focusing and applies exposure settings automatically to provide rapid image capture.” BioTek’s image software performs quantitative analysis as well on experiments ranging from a drop in fluorescence from an siRNA gene knockdown to measuring phenotypic changes in cells induced through gene editing techniques like CRISPR-Cas9.