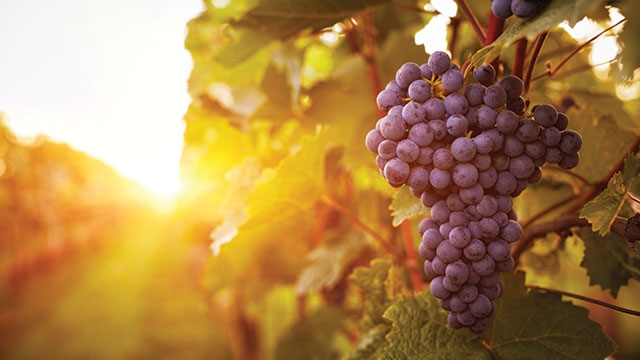 The winemaking industry tends to use traditional methods, often for economic reasons. “Winemaking is a capital-intensive industry with a low return on investment,” says Gavin Sacks, associate professor of food science at Cornell University (Ithaca, NY). “Most wineries have limited resources for doing analyses, and it’s hard to justify the cost on a whim.” As a result, many wineries hesitate to explore advanced chemical analysis, even though it can improve the wine and a business.

Part of the challenge arises from complex correlations. “It’s hard to predict the outcome of wine based on the starting point of the fruit,” Sacks says. So instead of running multiple chemical tests, many winemakers go on intuition.

Winemakers follow many steps to make the desired product. “It all starts with the quality of the fruit and the resulting chemistry of the juice pressed from that fruit, which is then fermented into wine,” says Debra Inglis, director of the Cool Climate Oenology and Viticulture Institute at Brock University (St. Catharines, Ontario). 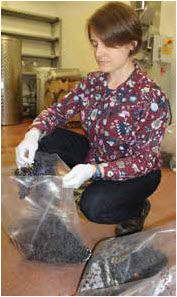 Lisa Dowling, a technologist at the Cool Climate Oenology and Viticulture Institute (CCOVI), processes grapes for chemical testing.Image courtesy of CCOVIThe growing conditions significantly impact the grapes. “If it is a cool, wet growing season, the fruit may be very high in titratable acidity, low in pH, and lack sugar and varietal character,” Inglis explains. A low pH industry insights: food science can impede fermentation, which produces wine without enough alcohol. Conversely, a hot and dry season can produce grapes that have too little acid and high sugar, and the resulting high pH can create wine with too much alcohol. This, Inglis says, can result in wine “with excessive alcohol that is bland and flat-tasting on the palette and in danger of microbial contamination due to the high pH.”

Most winemakers run some chemical tests on the initial juice. A basic analytical panel measures fermentable sugars, acidity as pH and titratable acidity, yeast assimilable nitrogen concentration, and spoilage indicators. Depending on the results, some characteristics can be adjusted. “If the sugar is too low, some sugar can be added, up to legal allowable limits,” Inglis explains. “If the acid is too high, the juice can be deacidified by precipitating out tartaric and malic acids.” Other adjustments can also be made. If the pH is too high, tartaric acid can be added, and if there’s not enough nitrogen for yeast growth, says Inglis, ammonia and amino acid nitrogen sources can be added to boost the nutrient status for the yeast.

If wine scientists want to delve even deeper into wine chemistry, that often requires gas chromatography (GC) plus mass spectrometry (MS). As Inglis notes, GC-MS “can be used to measure grape, insect, and yeast metabolites in juice and wine to alert winemakers to problems and avoid unwanted flavor compounds in the final product.”

Wine producers are keenly interested in rapid ways to measure compounds at concentrations below parts per million. “There are a number of relatively fast, automated, and not-too-expensive methods to measure compounds at parts per million or higher, like acids, sugars, and alcohol,” Sacks says. That can be done with infrared or ultraviolet imaging. For lower levels, scientists use GC-MS or replace GC with liquid chromatography (LC). “The lower levels include the most important aroma compounds,” Sacks notes, “but these analyses are not done routinely because of cost and time.” 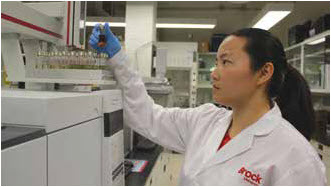 Shufen Xu, a CCOVI technologist, tests samples in the analytical services lab.Image courtesy of CCOVIConsequently, Sacks and his colleagues have been working with the U.S. Department of Agriculture and E&J Gallo Winery (Modesto, CA) on rapid ways to preconcentrate and extract volatile compounds from multiple wine samples before analyzing them with MS. “The idea is to move from the mind-set of one sample every 30 to 60 minutes to doing 30 to 60 samples a minute,” Sacks explains.

Using a thin-film polymer, Sacks and his team hope to extract volatile compounds from multiwall plates and then analyze the samples with MS. Pilot tests have been promising, and the team is increasing the number of samples. Eventually, Sacks envisions collecting grape samples in a 96-well plate in the field, putting the thin film on top of the plate, and taking that to the lab. “Instead of shipping lots of fruit like they do now,” he says, “they’ll have a postcard-size film that extracts all of the compounds of interest.”

At Ellutia (Ely, UK), scientists develop custom GC systems. One of those is geared toward analyzing wine corks for trichloroanisole (TCA). When a cork tree is treated with chlorinated phenolic compounds, which are common antimicrobials, several kinds of fungus in the tree can produce TCA. A cork made from such a tree can give wine a musty flavor. In the wine business, such a wine is said to have corkiness. “It’s the biggest problem for the cork industry,” says Andrew James, marketing director at Ellutia.

To test for this, corks soak in a water-ethanol mixture for 24 hours before analysis. But Ellutia developed a method that can test corks for TCA on a production line. With this technology, developed for cork-based product maker Amorim (Mozelos, Portugal), James says, “the instrument does [assembly line] testing of corks—one every 18 seconds—at a sensitivity of 0.05 nanograms per liter.” He adds, “That’s like one drop of TCA in 800 Olympic-size swimming pools.”

From grapes to corks, winemaking provides many places for chemists to improve the process and the product. One day, chemical analyses may begin right in the vineyard and improve the product all the way to a consumer’s glass.