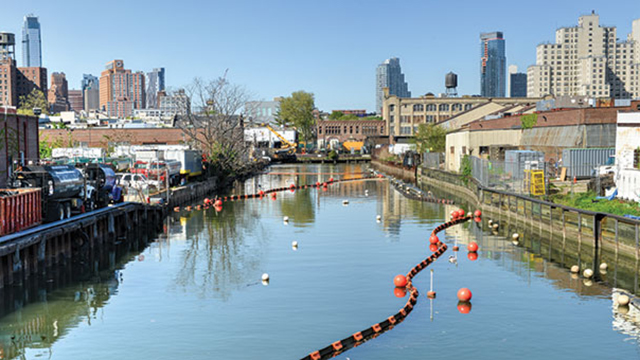 The Gowanus Canal in Brooklyn, NY was designated as a Superfund site in 2009.Credit: iStock

Manufacturing facilities, processing plants, landfills, and mining sites are sources of groundwater and soil contaminants. Prior to the 1970s, not much thought was given to the potential risks these processes and their byproducts could pose to the environment and human health. Later that decade, the Love Canal (Niagara Falls, NY) and the Valley of the Drums (Brooks, KY) gained attention as toxic sites, sparking an emergency declaration by President Jimmy Carter, and an Environmental Protection Agency (EPA)-conducted emergency response, respectively. By 1980, Congress enacted the Comprehensive Environmental Response, Compensation, and Liability Act (CERCLA, also referred to as Superfund), aimed to protect human health and the environment through cleanup efforts and increased liability for those responsible for contamination. The Superfund cleanup process is lengthy, beginning with a preliminary assessment, followed by feasibility studies, records of decision, and remedial action, with the ultimate goal of site redevelopment. There are many established environmental remediation methods and emerging technologies, including the use of nanomaterials.

The remediation process requires engineers and environmental scientists to assess the extent of environmental impairment and to design a program specific to the affected environmental media (soil, groundwater, sediment, etc.) and the contaminants. Remediation “may occur using entirely physical or chemical means (such as excavating, pumping, chemical treatment, or separations) or biological means where biodegradation is stimulated in place, or the contaminated media is removed in some fashion for biological treatment,” explains Dr. Mark Wiesner, professor of civil and environmental engineering at Duke University (Durham, NC). 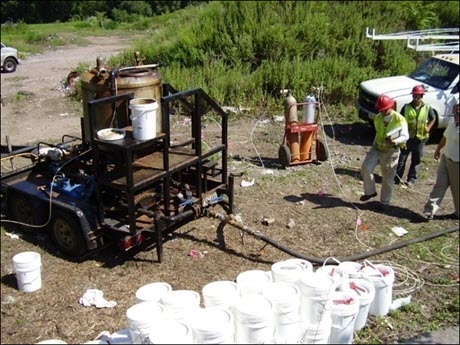 nZVI injection and monitoring.Credit: Dr. Daniel Elliott, Geosyntec ConsultantsDr. Daniel Elliott, a senior consultant at the specialized consulting and engineering firm Geosyntec, provides some examples of different approaches. “Impacted soils can often be excavated and disposed of off-site relatively quickly” and “groundwater remediation approaches for much of the past 30 years has involved using a series of groundwater wells and a pumping system to control the migration of the contaminant plume and then direct extracted groundwater to an on-site treatment system,” Elliott says.

While effective, these methods are not without their limitations. “Cost is usually the first challenge. The cost of excavating or pumping can be very high. The second related issue is time,” explains Wiesner. Indeed, remediation efforts are not a quick fix. The US EPA estimated it would take upward of 35 years (2004 to 2033) to clean up hazardous waste sites, with an estimated cost of more than $250 billion. “Virtually all environmental remediation approaches bring trade-offs,” explains Elliott. “Impacted soils can be excavated and disposed of off-site relatively quickly but the unit costs of disposing these soils tends to be high and if the areal extent of impact is large, the remediation cost can be astounding.” The same applies to groundwater remediation: “while effective, this in-situ pump and treat approach can take decades to complete and is expensive both from a capital and operations and maintenance standpoint.” Cost and time are difficult challenges to overcome in the development of new remediation methods. Nanomaterials have unique characteristics that may help to overcome the limitations of existing methods and technology.

Nanomaterials are particles ranging in size from one to 100 nm, used in many manufacturing processes, healthcare applications, and found in many products including paints and lubricants. Nanoscale remedial agents include calcium peroxide, Carbo-Iron, Nano-Goethite, Bionanomagnetite, and nano zerovalent iron, among others.

“Nanoremediation refers to the miniaturization of injected remediation amendments down to the nanoscale size range,” explains Elliott. “Early generation nanoremediation amendments included zero-valent iron and calcium peroxide.” Smaller particle size significantly enhances reactivity, and makes it easier to incorporate nanomaterials into water for injection into the contaminated material. Among them, “the most widely used method is probably the injection of metal iron (referred to as zero valent iron, ZVI) nanoparticles [nZVI] to provide electrons for reductive degradation of some contaminants,” says Wiesner.

Dr. Elliott completed his doctoral work under the supervision of Dr. Wei-xian Zhang, a pioneer of nZVI. In 2000, he implemented the first field demonstration of this new technology. Later, pilot studies carried out across North America and Europe demonstrated nZVI’s effectiveness for contaminated groundwater remediation. These studies produced several important findings, including the observation that chlorinated solvent concentration was dramatically decreased following injection of nZVI. Testing also revealed that nZVI particles travel with groundwater away from the injection site, which suggested they could be used to treat larger areas. Similarly, in field tests conducted by the US Navy, TCE concentration was reduced up to 99 percent in a well located nearly 20 feet away from the target treatment zone, further evidence to suggest nZVI particles may travel outside the treatment zone.

As with all methods, there are challenges associated with the use of nZVI for environmental remediation. “In general, in the global remediation marketplace, there are concerns associated with the costs for these novel materials as well as the quality assurance/quality control aspects of their production,” says Elliott. “In many cases, the additional cost of formulating the nanomaterial does not compensate for the relatively lower efficiency of conventional materials. For example, ferric oxide precipitation for arsenic removal, although using more iron, is generally cheaper than formulating nano maghemite or nano magnetite,” explains Wiesner.

Transport and dispersion are also challenging. According to Wiesner “in the case of nZVI, the primary challenge remains to formulate a material that provides good reactivity and good dispersibility.” In the environment, nanoparticles tend to aggregate, rendering them less effective, and the use of polymers and coating has been suggested to improve mobility.

The potential for toxicity is another important consideration. Current research suggests nanoparticles pose a low risk to human and environmental health, however there are many factors contributing to toxicity, such as dispersion, aggregation potential, surface properties, etc. Further, though nanoparticles may not be inherently harmful, the substances they bind and carry likely are.

Overcoming some of these challenges may be critical for wider adoption of nanoremediation methods in the future. Compared to the select few groups involved in early research on nanoremediation, “there are literally hundreds of research groups all over the world working to develop and apply a wide variety of efficacious nanoremedial agents to tackle a wide array of contaminants to complete these cleanups more quickly and costeffectively,” says Elliott. “I think that additional momentum on technology development and application will be realized as more studies documenting the field effectiveness and costs are published and more widely disseminated amongst research, regulator, and regulator party communities.”

There is also growing interest in nanotechnology offshoots, such as nanobioremediation. “Nano-bio approaches to improving microbial degradation of contaminants appear promising,” says Wiesner. These methods rely on nanoparticles synthesized from yeast, fungi, bacteria, and plants for remediation. Nanobioremediation is considered by some to be a less toxic approach. A current concern is the potential health risks of exposure during nanomaterial manufacturing, which would be significantly reduced working with plants, for example.

Nanomaterials have the potential to improve upon current methods of environmental remediation including soil excavation and pump-and-treat techniques used for groundwater. Having a smaller particle size, nanomaterials like nZVI offer greater reactivity than larger iron particles, and are more easily incorporated into water prior to injection. However, as Dr. Elliott notes, “with any new promising technology, there are potential unintentional consequences,” and further study is necessary to fully elucidate the effects of nanoparticles on human and environmental health. As research efforts continue to expand, scientists and engineers are finding ways to clean up contaminated environments and showing that work at the nanoscale can yield huge results.